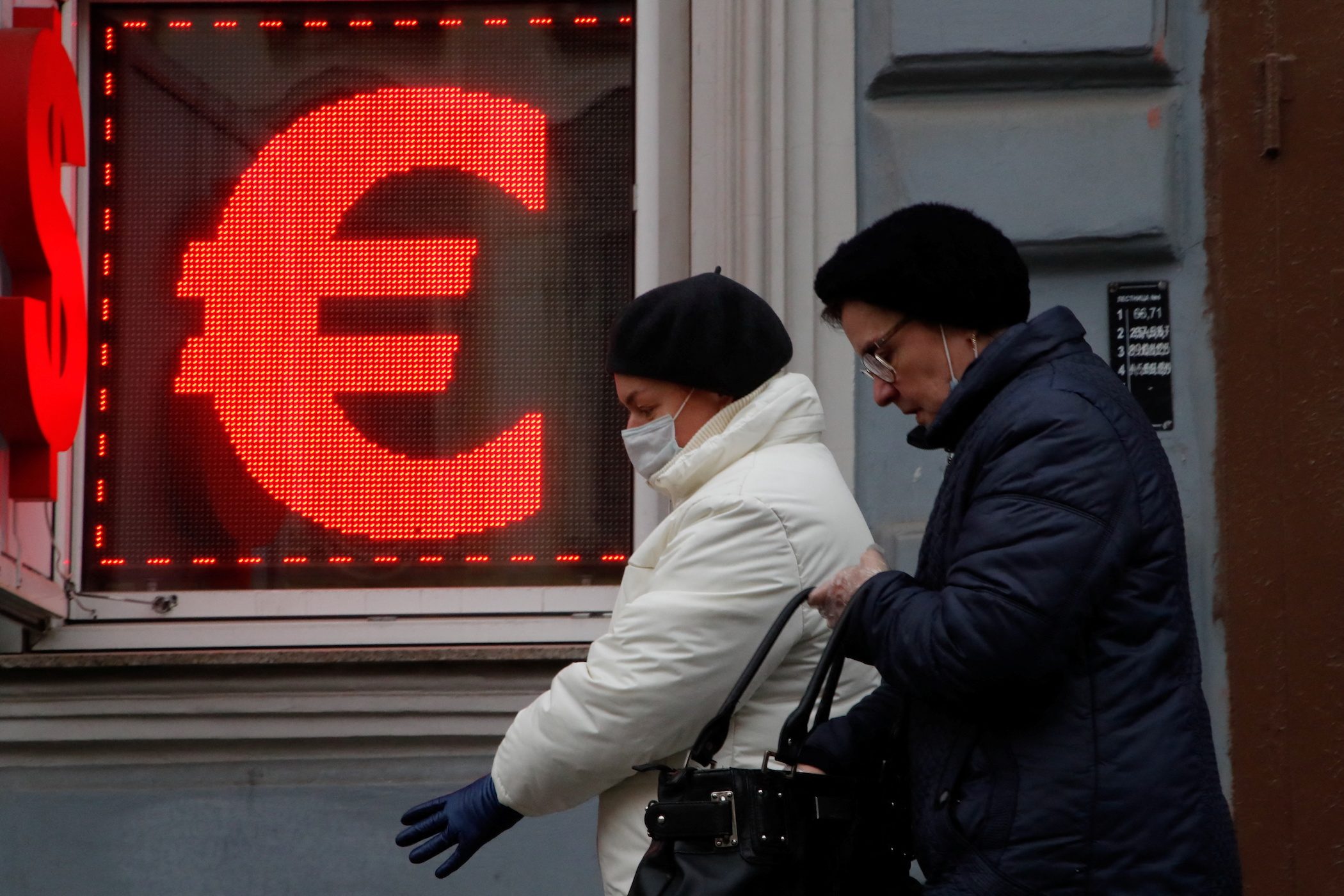 CURRENCIES. Women walk past a board showing the US dollar and euro signs in a street in Saint Petersburg, Russia, February 25, 2022.

Allianz and Swiss Re said on Monday, March 14, they were cutting back on Russian business as European financial institutions turn their backs on Russia.

The moves will pile pressure on others to follow.

Allianz said it had put a stop to insuring new business in Russia and was no longer investing in Russia for its own portfolio.

The decisions follow similar action by other major European insurers and reinsurers, which provide cover for large projects such as energy installations.

Insurer Zurich no longer takes on new domestic customers in Russia and will not renew existing local business, a spokesperson told Reuters on Monday.

Hannover Re said last week that new business and renewals for customers in Russia and Belarus were on hold, while Italian insurer Generali said earlier this month it would pull out of Russia.

Asset managers have said they will not make new investments in Russia and many Russian-focused funds have frozen because they are unable to trade following the sanctions and countermeasures taken by Russia.

The European Union’s markets watchdog European Securities and Markets Authority said on Monday it was coordinating the bloc’s regulatory response to the Ukraine conflict to ensure markets continued to function in an orderly manner.

Britain’s pensions regulator said the sector had little direct exposure to Russia, but that there were practical difficulties in selling Russian assets.

Ukraine said on Monday it had begun “hard” talks with Russia on a ceasefire, immediate withdrawal of troops, and security guarantees after both sides reported rare progress in negotiations at the weekend, despite Russian bombardments.

Deutsche, which had faced stinging criticism from some investors and politicians for its ongoing ties to Russia, announced late on Friday, March 11, that it would wind down its business there.

It was a surprise reversal by the Frankfurt-based lender, which had previously argued that it needed to support multinational firms doing business in Russia.

Britain’s London Stock Exchange Group also said late on Friday it was suspending all products and services for all customers in Russia, days after suspending the distribution of news and commentary in the country following new laws in Moscow.

Index provider FTSE Russell said on Monday it would delete four UK-listed, Russia-focused companies including Roman Abramovich‘s Evraz after many brokers refused to trade their shares.

Evraz, along with Polymetal International, Petropavlovsk, and Raven Property Group, would be deleted from all FTSE’s indexes during the March review, it said in a statement.

FTSE Russell said it had received feedback from its External Advisory Committees and market participants that trading in the shares was “severely restricted” as brokers refused to handle the securities, hitting market liquidity.

JPMorgan says the majority of forecast risk for European banks from the Russia shock will come from commodity and economic spillover effects, with the sector plunging since the end of February.

European banking stocks have come off their lows in recent days, however, and rose 3.8% on Monday. – Rappler.com