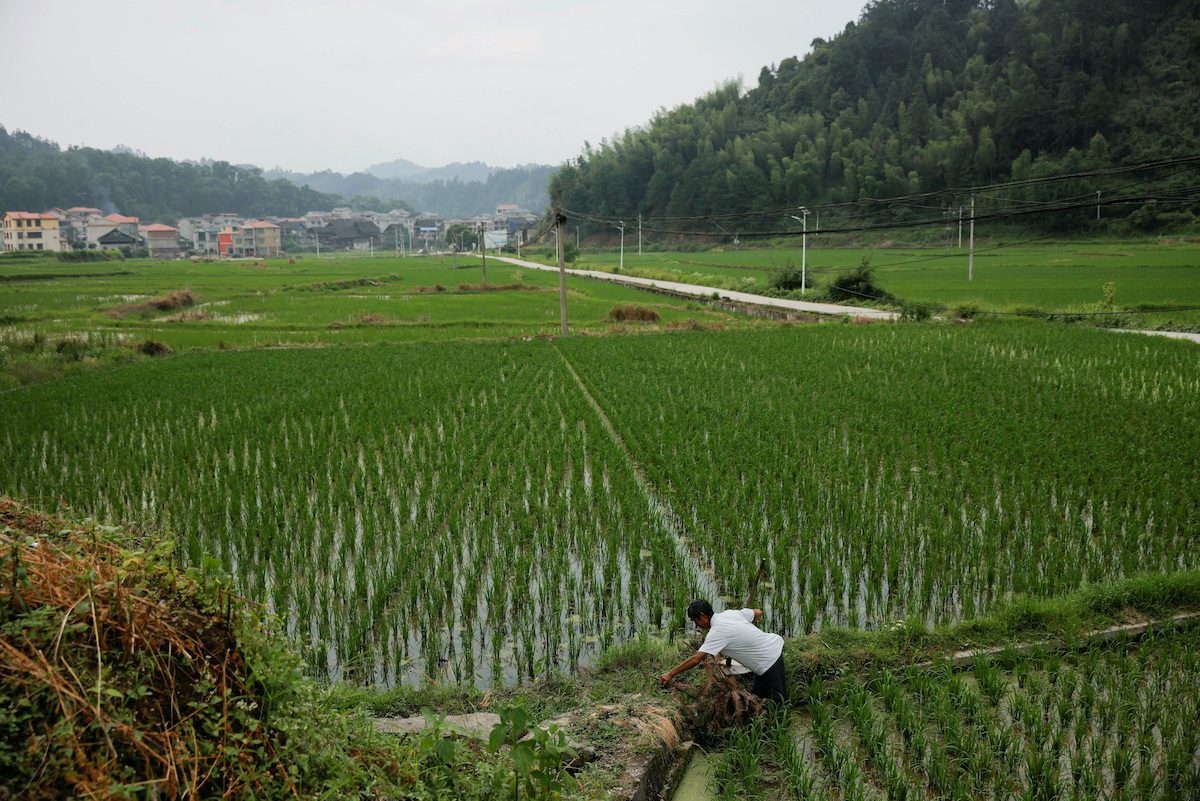 RICE. A farmer tends to his rice field in the village of Yangchao in Liping County, Guizhou province, China, June 11, 2021.

SINGAPORE – Abundant rice supplies in key exporters may largely offset an expected drop in output after floods in Pakistan and a severe heat wave in China damaged crops, capping any gains in prices from steady Asian demand.

Pakistan, the world’s fourth largest rice exporter, suffered extensive damage to agriculture, including rice, as floods ravaged large swathes of its farmland, while extremely high temperatures in parts of China at the end of August have taken a toll on rice output in the world’s biggest importer of the staple.

However, global rice stockpiles are pretty comfortable and an improving Indian crop outlook should quell any supply concerns and limit any price increases from recent strong demand that has emerged from Bangladesh, said a Singapore-based trader at one of the world’s top rice trading companies.

Pakistan is forecast to have lost around 10% of its 2022 estimated rice production of around 8.7 million metric tons, while China has suffered some damage, although the extent of crop losses is not clear, traders said.

Food prices have soared in markets across Pakistan as devastating rain ruins crops and disrupts supplies, an early sign of how the worst floods in decades are creating food shortages at a time of financial crisis.

“It is too early to say exactly how poor yields [in China] may be,” Clubb said. “A general point, stocks in China are still very ample.”

Monsoon rain, which was delayed in parts of India’s northern and eastern rice producing regions, have improved over the last couple of weeks, boosting crop prospects in the world’s largest rice supplier, traders said.

India had earlier been examining a need to restrict exports of 100% broken rice mainly used for feed purposes.

But an improvement in rainfall over Indian rice growing areas has ended any discussion of government restrictions on exports, said a second trader in Singapore who sells Indian rice to buyers in Asia and Africa.

The United Nations Food and Agriculture Organization’s world price index fell for a fifth month in August, after hitting a record in March after Russia invaded Ukraine, as a resumption of grain exports from Ukrainian ports contributed to improved supply prospects.

However, strong demand from Bangladesh has underpinned rice prices in recent weeks.

Bangladesh plans to import around 1.2 million metric tons of rice over the next few months to shore up reserves and cool high domestic prices.

Thailand and Vietnam, the world’s second and third largest rice exporters respectively, have agreed to cooperate on raising prices, a move aimed at increasing leverage in the global market and boosting farmers’ incomes. – Rappler.com