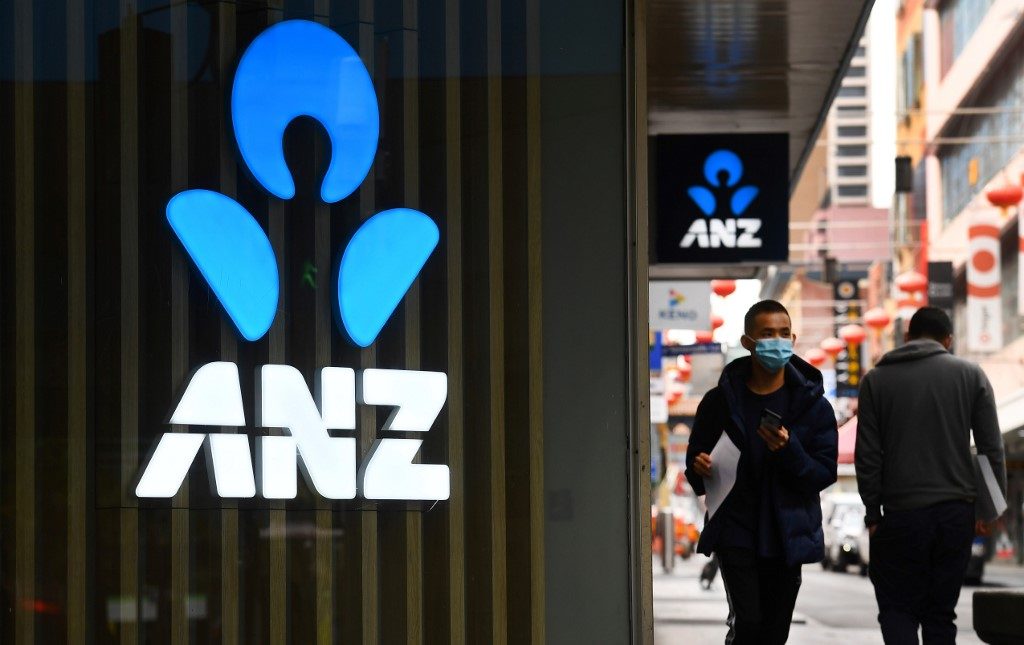 A man walks past an ANZ bank sign in Melbourne's Chinatown on April 30, 2020. - Australia's ANZ Bank announced a 50-percent dive in after-tax profits, as the lender set aside one billion Australia dollars (655 million US) to cover expected losses resulting from the coronavirus fallout. (Photo by William WEST / AFP)

The bank said that from 2030 it would no longer finance thermal coal mines or coal-fired power stations, joining Australia’s other “big 4” banks who have already made similar commitments.

Coal has long been a mainstay of the country’s resource-dependent economy.

Exports were worth almost US$50 billion in 2018 – or more than 3% of gross domestic product, according to central bank research.

In the last few months major customers – most notably China, Japan, and South Korea – have all vowed to reach net-zero carbon emissions by the middle of this century.

That is likely to mean reduced dependence on fossil fuels, particularly coal, which accounts for almost half of global carbon dioxide emissions.

After historic bushfires and prolonged drought, a poll released this week by The Australia Institute showed 4 in 5 Australians are concerned by climate change and only 12% back Morrison’s plans for a gas-led COVID-19 recovery.

But investors like ANZ are increasingly voting with their feet.

“We are in a unique position, through our lending decisions, to support customers and projects that reduce emissions as well as support economic growth,” ANZ said on Thursday.

“That is why we’ve announced important changes to our carbon policy, supporting the transition to a net zero emissions economy by 2050.”

The Australian Financial Review quoted a former central bank governor as saying that suggestion risked sparking a run on the banking sector.

The coal industry has publicly shrugged off upheaval in the sector and predicts strong demand in Asia for thermal coal over the next 10 years – particularly from India and Vietnam.

Those technologies – such as carbon capture – “will be critical in helping countries continue their economic development into the future while reducing emissions,” council chief executive Tania Constable said in a statement.

ANZ Bank also announced on Thursday that its post-tax profit had plunged 40% after setting aside billions to cover loans unlikely to be repaid because of the coronavirus pandemic.

A further Aus$815 million was set aside to cover expected virus-related lending losses in Asia.

The bank said about 119,000 home loans across Australia and New Zealand were deferred during the crisis, with roughly 40,000 remaining frozen as of October 15 and another 11,000 requesting an extension. – Rappler.com