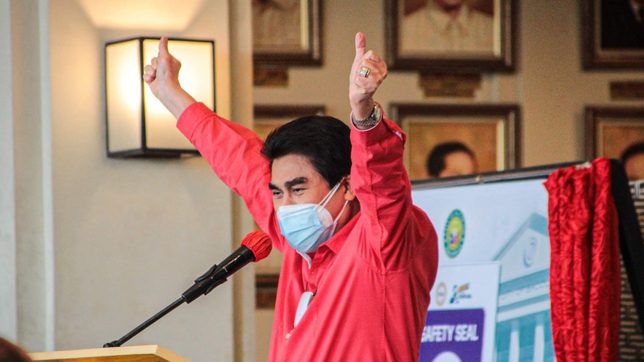 The Philippine Chamber of Commerce and Industry (PCCI) picked Bacolod City as the most business-friendly local government unit (LGU) outside Metro Manila, besting 10 other finalists in the highly urbanized city category of the nationwide search.

“This [award] is like a candle in the darkness. This reassures us that when this pandemic is over, we will all be back in business and we will row the boat together,” Mayor Evelio Leonardia said during a virtual ceremony on Thursday, November 18, where he accepted the award from PCCI president Benedicto Yujuico and chairperson Alegria Limjoco.

Yujuico and Limjoco were at the PCCI Innovation Center, while Leonardia and local business leaders were at a luncheon at the Bacolod City Government Center.

The 2021 recognition came 14 years after Bacolod won a similar accolade in 2007, also with Leonardia as mayor. The city has been a consistent national finalist of the PCCI award in the last four years since 2017, said Bacolod’s information office.

In his message of acceptance, Leonardia said the award will help accelerate the city’s economic recovery. He promised local business leaders, “We will tread that road to recovery altogether.”

The mayor said the city’s first award in 2007 was a major factor in attracting big investments to the city.

The PCCI’s awards committee cited the Bacolod City government for its efforts to keep the local economy afloat despite the COVID-19 crisis.

It recognized the LGU’s support for local businesses, including the 24-hour vaccination drive for those in the business process outsourcing sector and the service industry, as well as the mobile vaccination campaign that inoculated thousands of vendors in major public markets and public utility vehicle drivers, among others.

Bacolod was up against the cities of Baguio, Angeles, Cagayan de Oro, Davao, General Santos, Iloilo, Lapu-Lapu, Mandaue, Olongapo, and Zamboanga for the award.

Previously, the Department of the Interior and Local Government (DILG) recognized the city government with the Seal of Good Local Governance, a measure that gives LGUs and its employees incentives or performance-based bonuses.

Bacolod was also recently named by the DILG as Best Performing LGU-City Category in Western Visayas and was cited Most Competitive City in the Visayas in the Competitive Cities and Municipalities Index of the Department of Trade and Industry.

Bacolod’s bid book for the tilt included the application of information technology for pandemic-related services, mall-based and electronic processing of business permits, and accelerated release of permits within 60 minutes for applicants with complete requirements.

Leonardia said the number of registered businesses in Bacolod was at a record-high 25,627 in 2019 before the onset of the pandemic. – Rappler.com