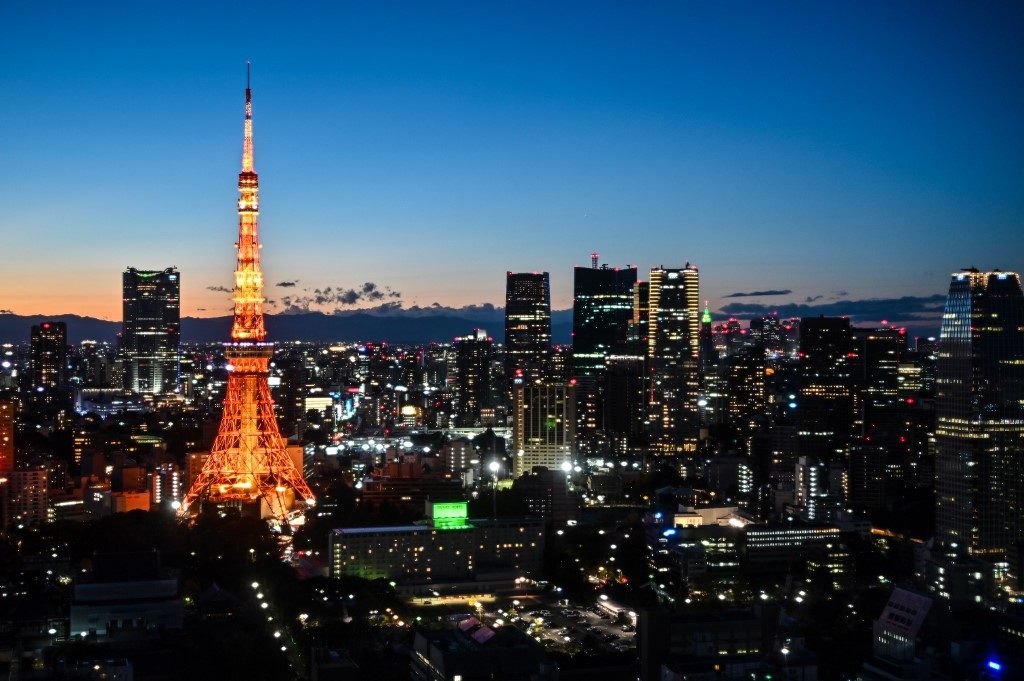 SKYLINE. The Tokyo Tower is seen at dusk in the Japanese capital on November 28, 2020.

Facebook Twitter Copy URL
Copied
'Financing, mainly of firms, is likely to remain under stress for the time being,' says the Bank of Japan

The Bank of Japan (BoJ) extended an emergency virus-related lending program but kept its monetary easing policy unchanged on Friday, December 18, as the country faces a record spike in new COVID-19 cases.

In May, the central bank launched a new lending scheme aiming to channel funds to small and medium-sized businesses suffering from the economic fallout of the coronavirus pandemic.

At a two-day policy meeting, the BoJ extended the end-date for those measures by 6 months to September 2021.

It made no change to its ultra-loose monetary policy, however – keeping the key interest rate at -0.1% and the 10-year government bond yield target at 0%.

“Japan’s economy has picked up, but the pace of improvement is expected to be only moderate while vigilance against the novel coronavirus continues,” the central bank said.

“Financing, mainly of firms, is likely to remain under stress for the time being,” it added, referring to the extension of the lending program.

Speaking later, bank boss Haruhiko Kuroda emphasized its commitment to its long-standing policies, including the still-distant goal of 2% inflation.

“We’re not going to revise the 2% inflation goal,” he told reporters.

“In regard to the interest rate level, it is expected to hover at the level of the current long- and short-term rates or lower.

“We don’t plan on revising the negative interest rate either,” he said, apparently quashing speculation that the long-standing position could soon be up for discussion.

The pandemic has wrought global economic carnage, with Japan only just exiting recession, and many countries have announced massive cash injections.

Japan has seen a relatively small coronavirus outbreak overall, but the nation has reported record numbers of new infections in recent weeks.

The BoJ’s move comes after the government approved more than $700 billion in fresh stimulus this month to fund projects from anti-virus measures to green tech – the country’s 3rd such package this financial year.

On Thursday, December 17, Tokyo Governor Yuriko Koike and her staff warned that the capital’s hospitals were struggling to provide routine care because of the sharp rise in new coronavirus cases.

The city, which is preparing to host the virus-postponed Olympics next summer, raised its alert level for pressure on medical services to the top of a 4-tier system for the first time. – Rappler.com