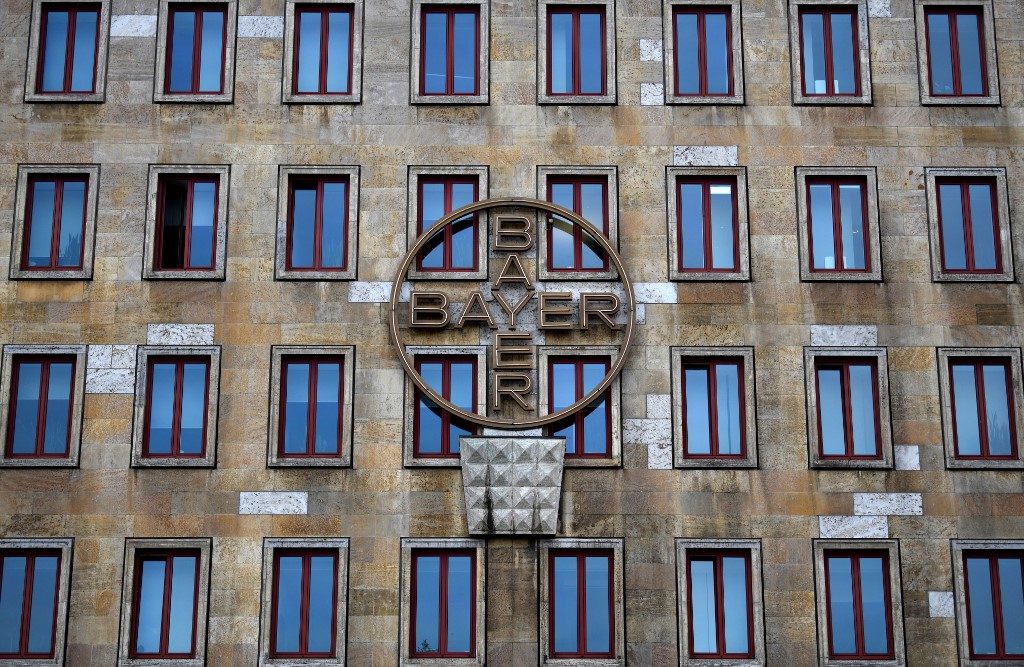 The Bayer logo on the facade of the group's headquarters in Leverkusen, Germany, on April 23, 2019. (Photo by INA FASSBENDER / AFP)

Bayer on Tuesday, November 3, posted another huge loss due to steep impairment charges at its agrochemical division and increased legal costs over its glyphosate weed killer linked by plaintiffs to cases of cancer.

The German pharmaceuticals and chemicals giant made a 3rd quarter net loss of 2.7 billion euros ($3.2 billion), compared with a profit of 1.04 billion euros in the same quarter last year.

The results were well down on analyst estimates for 798 million euros in profit, according to the FactSet financial information service.

Bayer’s 63-billion-euro acquisition of United States agrochemical group Monsanto, completed in 2018, has exposed the Leverkusen-based company to multibillion-euro suits over its Roundup glyphosate weedkiller, while it has also been hit hard by the coronavirus pandemic.

The company said it would take a non-cash impairment charge of 9.3 billion euros due to “reduced growth expectations” on various assets in its agricultural business, as COVID-19 places “additional strain” on the unit, finance chief Wolfgang Nickl said in a statement.

However, the quarterly result improves on the 9.5-billion-euro loss Bayer posted in the 2nd quarter, which included provisions for more than $10 billion (8.5 billion euros) in settlements for most lawsuits over Roundup announced in June.

Shortly afterwards, however, a California judge expressed major reservations about the settlement’s validity, forcing Bayer to back down on part of the agreement involving future cases.

Bayer said there were around 125,000 claims involving Roundup in June, but it will now “take more time” to address legal issues, and it increased provisions for them in the 3rd quarter to $2 billion from $1.25 billion previously.

“The company is continuing to work on a joint proposal to address potential future Roundup claims together with plaintiffs’ counsel,” it said, adding that it was “working in good faith” to address the issues raised by the court.

The agrochemical business was also impacted by the depreciation of the Brazilian real, which is “weighing heavily” on trading in the world’s second largest agricultural market.

Despite the loss, Bayer confirmed its outlook for the full year “thanks to stringent cost management and the acceleration of our structural measures,” chief executive Werner Baumann said in the statement.

In October, Bayer said it would accelerate a cost-cutting program that may lead it to slash jobs as it also tries to mitigate the impact of COVID-19.

Bayer said in an earnings call that the company has 3,500 fewer workers than last year, and the transformation program would be 60% complete at the end of the 2020.

Its pharmaceuticals division recovered in the quarter, Bayer said, helped by its blockbuster blood thinner Xarelto, although the drug’s patent expiry in 2024 poses a challenge for future earnings prospects.

Bayer said last week it would buy US-based biotech firm AskBio for as much as $4 billion as it aims to get a foothold in the rapidly growing gene-therapy market.

The results failed to please and Bayer shares saw the sharpest fall on Frankfurt’s blue-chip DAX, down 1.2% at 1200 GMT compared with a rise of 1.8% for the market as a whole.

Bayer’s share price is now down 43% for the year to date. – Rappler.com