Benham Rise has oil and gas?

MANILA, Philippines - An official of the Department of Energy (DOE) said this is a good time to do a seismic study to determine if there are oil and gas deposits in Benham Rise, the recently awarded underwater territory east of the Philippines.

Energy Undersecretary Jose Layug Jr. told reporters on Monday, September 10, that, if seismic data would show commercial quantity of deposits in Benham Rise, they are looking at offering it to investors in the upcoming round of new exploration contracts.

"It would be nice to include the Benham Rise in PECR 5," Layug said, referring to the Fifth Philippine Energy Contracting Round (PECR5) in 2013.

He said 4 exploration companies have already expressed interest in doing seismic surveys in the eastern side of the Philippines. 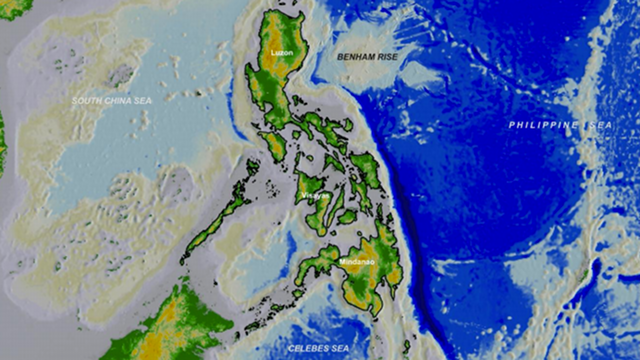 FIRST VICTORY. This is the Philippines' first victory for territorial claims under the UN Convention on the Law of the Sea.

Screen grab from a document the Philippines submitted to UN

It is the first territory that the Philippines won under the UN Convention on the Law of the Sea (Unclos), the same convention the Philippines invokes in its two-month standoff with China over Scarborough Shoal on the western side of the country.

The Philippines filed its claim for Benham Rise in 2008 and the UN has officially approved the claim in April 2012.

The Bureau of Fisheries and Aquatic Resources (BFAR) has previously said it has plans to also explore the potentially rich marine resources  at the new territory, as well as the largely unexplored Pacific seaboard

The DOE has previously auctioned energy blocs in the western side of the Philippines under PECR-4.

However, investor interest has been dampened by the ongoing territorial dispute between the Philippines and China, which claims all of the South China Sea (or West Philippine Sea). - Rappler.com