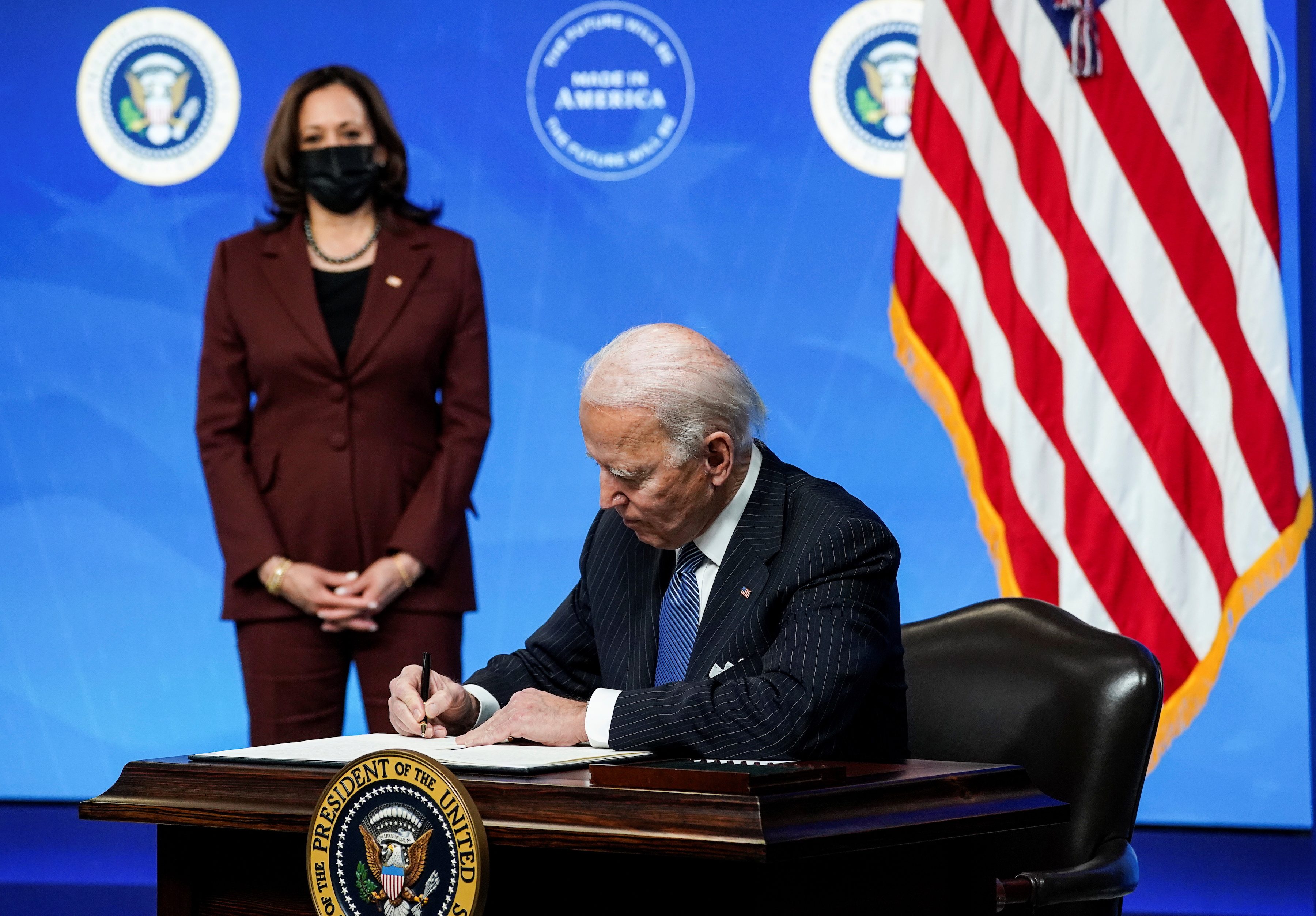 SIGNING. US President Joe Biden signs an executive order after speaking about his administration's plans to strengthen American manufacturing as Vice President Kamala Harris listens in the South Court Auditorium at the White House in Washington, January 25, 2021.

Facebook Twitter Copy URL
Copied
'America can't sit on the sidelines in the race to the future. Our competitors aren't waiting,' says US President Joe Biden

President Joe Biden vowed on Monday, January 25, to leverage the purchasing power of the United States government, the world’s biggest single buyer of goods and services, to strengthen domestic manufacturing and create markets for new technologies.

The Democratic president signed an executive order aimed at closing loopholes in existing “Buy American” provisions, which apply to about a third of the $600 billion in goods and services the federal government buys each year. The order will make any waivers more transparent and create a senior White House role to oversee the process.

Biden reiterated plans announced on the campaign trail to replace the fleet of federal cars with US-made electric vehicles.

Revitalizing the manufacturing sector, which accounts for about 12% of the US economy, is a key part of Biden’s broader push to drive up wages, create more union jobs, support minority-owned businesses, and strengthen US supply chains, White House officials say.

Boosting US manufacturing has proven a vexing challenge for previous administrations, including that of former president Donald Trump.

“America can’t sit on the sidelines in the race to the future. Our competitors aren’t waiting,” Biden said. “To ensure the future is made in America, we need to win not just the jobs of today, but the jobs and industries of tomorrow.”

Manufacturers have been attracted by lower wages and weaker environmental standards in China and other countries in recent decades. This exodus has resulted in critical gaps that have been laid bare during the COVID-19 pandemic, such as the making of medical equipment.

China overtook the United States as the world’s top manufacturer in 2010, and was responsible for 28% of global output in 2018, according to United Nations data.

“This order is a good first step in revitalizing US manufacturing, which Trump’s policies failed to do over the past 4 years,” AFL-CIO president Richard Trumka said.

Major US retailers, including Walmart, have launched high-profile “Made in America” campaigns, only to court foreign manufacturers afterward.

Rebuilding supply chains and developing new ones is key to US economic growth, trade experts say.

The US trade deficit surged to $68 billion in November, its highest level in 14 years, as businesses filled shelves with foreign goods and supplied domestic factories reliant on foreign parts, offsetting a rise in exports.

Biden’s order directs federal agencies to reevaluate the threshold used to determine US content, to prevent companies that sell to the government from importing largely foreign-made goods and selling them as US-made after making minor tweaks.

New percentages for required US content will be determined as a result of the process to be launched on Monday, officials said.

Canada, the second largest US trading partner, is worried Canadian companies and workers could bear the pain if trading relations between the neighboring countries deteriorate.

“We are always concerned by ‘Buy American’…for sure that is going to be an issue very, very high on our agenda in our work with the Biden administration,” Canadian Finance Minister Chrystia Freeland told reporters in Ottawa.

Asked if the order would be seen as protectionist, a Biden administration official said Sunday night, January 24, that it would be fully consistent with US commitments under the World Trade Organization, and Washington would work with trade partners to modernize global rules. – Rappler.com