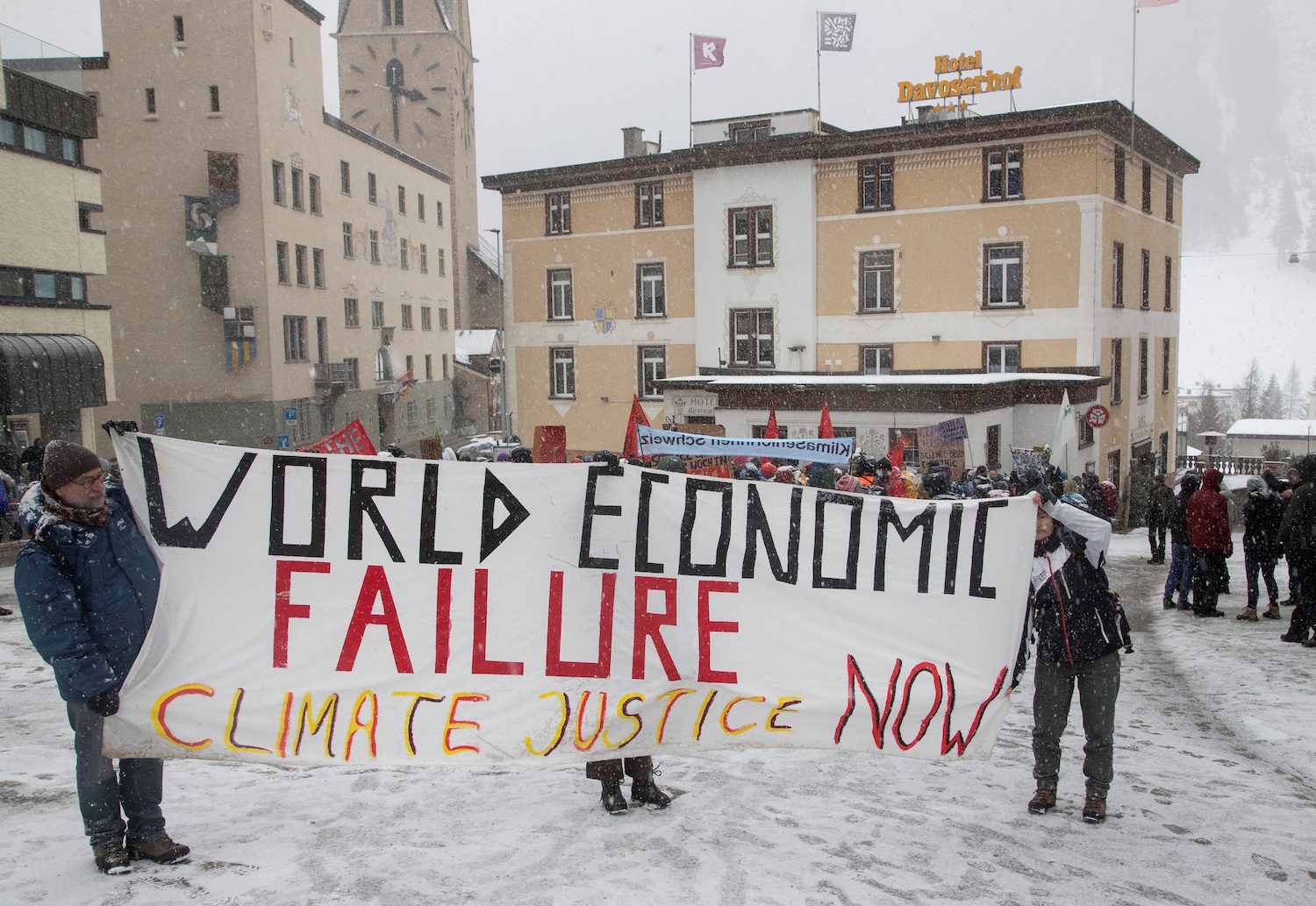 CLIMATE JUSTICE. Climate activists display a banner during a protest ahead of the World Economic Forum 2023 in the Alpine resort of Davos, Switzerland, January 15, 2023.

Facebook Twitter Copy URL
Copied
'We are demanding concrete and real climate action,' says the head of the Young Socialists party in Switzerland

DAVOS, Switzerland – Big oil firms came under pressure at the start of the World Economic Forum (WEF) from activists who accused them of hijacking the climate debate, while a Greta Thunberg-sponsored “cease and desist” campaign gained support on social media.

Major energy firms including BP, Chevron, and Saudi Aramco are among the 1,500 business leaders gathering for the annual meeting in the Swiss resort of Davos, where global threats including climate change are on the agenda.

“We are demanding concrete and real climate action,” said Nicolas Siegrist, the 26-year-old organizer of the protest who also heads the Young Socialists party in Switzerland.

The annual meeting of global business and political leaders opened in Davos on Monday, January 16.

“They will be in the same room with state leaders and they will push for their interests,” Siegrist said of the involvement of energy companies during a demonstration attended by several hundred people on Sunday, January 15.

The oil and gas industry has said that it needs to be part of the energy transition as fossil fuels will continue to play a major role in the world’s energy mix as countries shift to low carbon economies.

On Monday, a social media campaign added to the pressure on oil and gas companies, by promoting a “cease and desist” notice sponsored by climate activists Thunberg, Vanessa Nakate, and Luisa Neubauer, through the nonprofit website Avaaz.

It demands energy company CEOs “immediately stop opening any new oil, gas, or coal extraction sites, and stop blocking the clean energy transition we all so urgently need,” and threatens legal action and more protests if they fail to comply.

Sumant Sinha, who heads one of India’s largest renewable energy firms, said it would be good to include big oil companies in the transition debate as they have a vital role to play.

“If oil people are part of these conversations to the extent that they are also committing to change then by all means. It is better to get them inside the tent than to have them outside the tent,” Sinha, chairman and CEO of ReNew Power, told Reuters, saying that inclusion should not lead to “sabotage.”

Rising interest rates have made it harder for renewable energy developments to attract financing, giving traditional players with deep pockets a competitive advantage.

As delegates began to arrive in Davos, Debt for Climate activists protested at a private airport in eastern Switzerland, which they said would be used by some WEF attendees, and issued a statement calling for foreign debts of poorer countries to be canceled in order to accelerate the global energy transition. – Rappler.com