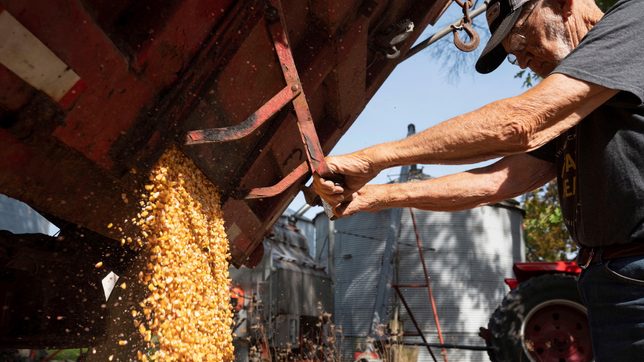 FARMING. Dale Nething, 86, transfers a load of corn from his truck to a grain silo on his family farm in Ravenna, Ohio, October 11, 2021.

Facebook Twitter Copy URL
Copied
Lower crop prices would be good news for consumers after global food prices soared to the highest level in a decade. But food inflation is far from over.

Big US harvests, near-perfect weather for planting in Brazil, and signs of slowing purchases by top buyer China are bolstering supplies of two of the top globally traded commodities: soy and corn.

The rising stocks indicate that prices for those key crops, as well as for other staples such as sugar and coffee, may have peaked after the surge sparked by the onset of the pandemic, farmers, brokers, and analysts said.

Lower crop prices would be good news for consumers after global food prices soared to the highest level in a decade, according to the United Nations food agency.

Dwindling supplies and strong global demand for crops over the past 18 months drove food inflation and spurred fears of shortages.

Cheaper soy and corn would lower the cost of feeding livestock used to produce meat, which has been out of reach for many people during the COVID-19 pandemic. But falling prices could threaten farmers’ profits, especially after seed and fertilizer companies raised prices on crop inputs.

Since topping out at near-decade highs in May, Chicago Board of Trade soybean futures have fallen 27% while corn futures fell 24% as near-perfect growing conditions across broad swaths of the United States led to a bountiful harvest.

But with the northwestern United States and Canada still reeling from a historic drought and dry weather potentially continuing there due to the La Niña climate phenomenon, prices of oats, wheat, and canola are poised to remain high, meaning food inflation is far from over. Wheat futures recently surged to a nine-year top.

The market for soybeans is under the most pressure, as rising supplies and concerns about a cooling of Chinese demand are pushing prices lower.

After finishing the 2021 harvest of what he called a bigger-than-average soybean crop on the 3,600-acre farm he operates in Woodhull, Illinois, Drew DeSutter booked some sales on soybeans he will deliver to grain dealers in 2022 in case the market declines by the time that crop, which he has not even planted yet, matures.

“I do not think it is a bad idea for farmers to set some prices on next year’s crop,” DeSutter said.

The US Agriculture Department (USDA) raised its outlook for world supplies of soybeans every month since it gave initial projections for the current marketing year in May. If the current forecast of 104.57 million tons is realized, that would be the second biggest world soybean stocks record.

China, the top global buyer of soybeans, has slowed purchases in recent months due to poor margins crushing soy into meal and oil to feed livestock. Analysts say shipments to China in 2021 might be less than 100 million tons due to a collapse in hog sector profitability and a sharp rise in the use of wheat for animal feed.

Even prices of vegetable oils including palm oil, which surged due in part to a labor shortage in Malaysia, have begun to show weakness, with palm oil posting losses in three of the last four weeks. But soy and canola oil have been in high demand for biodiesel, as companies transition to greener fuel.

While poor weather has cast doubt on the state of China’s corn crop, the USDA and private analysts expect China to import less of the grain than it did last year. Global corn supplies were seen rising 4.1% in the 2021-2022 crop year, according to USDA data.

“Given the current balance of supply and demand, I believe that the higher prices are behind us,” said Camilo Motter, a grain broker in Brazil, the top global producer of soybeans, sugar, and coffee.

Argentina, projected to be the world’s third largest corn supplier and fourth largest supplier of soy this year, is expected to produce a record corn crop and a larger soybean crop than last year, according to the Buenos Aires Grains Exchange.

After a rough growing season, Brazil has had ideal weather for planting its next crop – long stretches of dry days for field work followed by ample rains that helped shepherd crops through the early stages of development.

In Brazil’s coffee belt, the largest amount of rain for the month of October since 1983 fell, after farmers struggled with the worst drought in nearly a century earlier in 2021. Although some damage was already done to plants by frosts and drought, market players believe the ample moisture could give next year’s crop a large boost.

Montesanto Tavares Group, a large coffee producer and processor in Brazil, expects a near-record crop in 2022.

Benchmark sugar prices on the ICE exchange touched a 4-1/2-year peak on October 11 amid signs of renewed demand from China in a period when Brazil production data confirmed a dismal crop in the world’s top grower after a harsh drought.

But the long-term supply outlook seemed to improve since, analysts say, due to the weather in Brazil and good prospects for the upcoming harvest in India and Thailand, the other two large global players. Market speculators have begun to slash their long sugar position, an indication that their yearlong bets on rising prices might be ending.

“With the market range-bound and upside potential deemed to be limited, speculators have probably decided to take their profits and deploy their funds elsewhere,” a European sugar trader said.

In the northern US Plains, farmer Doyle Lentz managed to squeak through this year’s drought with a surprisingly big soybean crop but faced shortfalls in canola and spring wheat production due to the dry soils. For next year, he has booked some sales of soybeans but was holding off on canola and wheat contracts due to uncertainties about prices of fertilizer and other inputs.

Lentz said he would not be able to turn a profit on canola at current prices and would need a further rally before he committed any acres to that crop.

“We are going to have to spend a lot more time with the calculators and when we get to some point where we can make a profit we will have to lock that in,” said Lentz, who has a 6,000-acre farm in Rolla, North Dakota.

In the Canadian Prairies, the severe drought that shrank production of grains and canola is likely to extend into 2022, said Colin Laroque, professor of soil science at University of Saskatchewan.

The La Niña weather phenomenon usually means cold, dry weather for the Prairies, at least into February, he said. It would take a deluge of rain in spring to counter the drought and restore soil moisture, but a soaking on that scale would make it difficult to plant crops, he added.