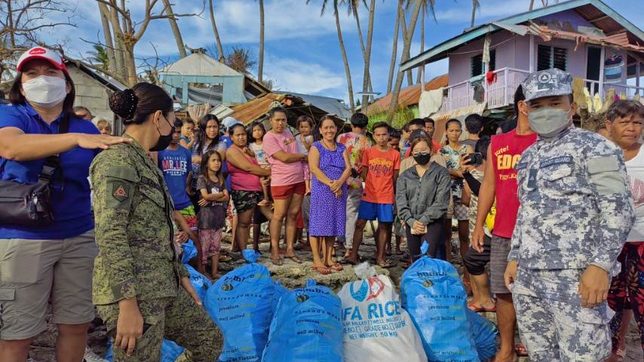 Engineers of power firms operating in Bohol province said on Thursday, December 23, that crews are working double-time to restore power in towns devastated by Typhoon Odette (Rai), adding that other regions like Bicol have also sent teams to help the local effort.

In a public briefing, Governor Arthur Yap said the National Grid Corporation of the Philippines (NGCP) has focused on restoring Bohol’s damaged power connection to Leyte.

“But even if that is reconnected, there are transmission towers damaged on our island,” Yap said in a mix of English and the local language. “It is not a mere problem of connection. Will our transmission lines be able to handle the (restored) connection?”

NGCP representative Raul Galano said they are rushing to repair two badly hit transmission systems between Tagbilaran and Ubay by the New Year: the Tagbilaran-President Carlos P. Garcia, Alicia to Ubay line, and the Tagbilaran-Polilya-Carmen-Ubay line, both with 69-kilovolt capacity.

Bohol II Electric Cooperative, Inc. (BOHECO II) general manager and engineer Eugene Tan said the backbone of the Valencia to Alicia line in the 3rd district is now ready to receive power from the NGCP.

A task force is now working on the transmission line from Alicia to Ubay, Talibon, Trinidad, and other interior areas, he added.

“These are the worst-hit communities and we’re sending double the number of crews,” Tan said.

“My hope is we complete tasks as soon as possible to give hope to our people,” he added, acknowledging that residents of these towns are “depressed” by post-Odette conditions.

“We will not let you down,” Tan promised the struggling communities.

BOHECO I’s representative, only introduced as Engineer Kidlat, said their crews have been working “from Day 1, starting from 5 am.”

He said the first three days were spent clearing roads to allow access to heavy equipment. Workers are now repairing posts and stringing wires in Calape, Clarence, and Tubigon towns. He said Dauis and Panglao, where damage was less, are now waiting for power supply from the NGCP.

Yap announced that Landbank will provide P100,000 in financial assistance for relief operations to each of the province’s 47 municipalities and lone city.

But he urged local government units to send in reports of transitional shelters needed by residents.

Most 2nd district LGUs have submitted their reports except for Clarin, Getafe, Sagbayan, San Isidro, and San Miguel.

Only Duero and Sierra Bullones in the 3rd district have sent in reports, Yap said.

“We need this because the National Housing Authority is already preparing the financial package for provinces affected by the typhoon,” the governor said.

Meanwhile, Katapatan Troopers from the 47IB, the Philippine Air Force, and the Bohol Panglao International Airport Police collaborated in transporting relief goods by chopper to evacuees around Bohol on Thursday.

Fisherfolk volunteers also helped the Philippine Coast Guard (PCG) and the Philippine Army in loading and unloading relief aid for Pandanon Island in Getafe town. The PCG delivered the aid onboard the BRP Tubbataha and also conducted disaster assessment on the island on Wednesday, December 22.

Yap visited Talibon on Tuesday, December 21, and met with Mayor Janet Garcia to determine the needs of the community, which still had no telecommunications signal at the time of his visit.

The governor also spoke with vendors to discuss rehabilitation plans for their destroyed market. – Rappler.com