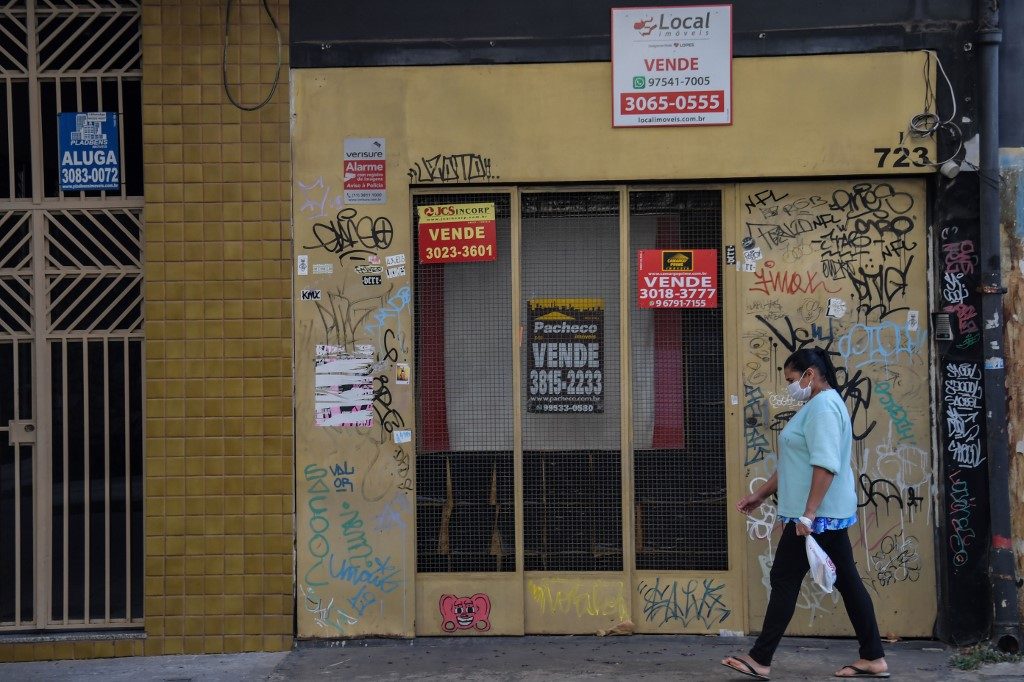 A woman walks past an empty store in a commercial area of Sao Paulo, Brazil, on June 17, 2020. - Sao Paulo is resuming its economic activity, but in some streets of Brazil's largest metropolis a succession of low iron curtains is evidence of the impact of the coronavirus: merchants have closed down. (Photo by NELSON ALMEIDA / AFP)

Facebook Twitter Copy URL
Copied
This move ends a spree of 9 consecutive cuts, and most analysts predict that the rate will remain at 2% until at least the end of 2020

Brazil’s central bank maintained its benchmark interest rate on Wednesday, September 16, at 2%, a record low, highlighting its “caution” in the face of uncertainty related to the coronavirus pandemic.

The move ends a spree of 9 consecutive cuts, and most analysts predict that the rate – which stood at 6.5% in June 2019 – will remain at 2% until at least the end of the year.

The central bank’s monetary policy committee in a statement emphasized the “uncertainties over the rate of growth of the economy” and indicated that “inflation is expected to increase in the short term.”

This small change, however, masks a very sharp increase in the price of food (up 6.1% over the first months of the year), including a surge in essentials for the average Brazilian diet, with rice up 19.3% and black beans up 28.9%.

This increases is caused in particular by a boom in exports, especially to China, due to the depreciation of the Brazilian real, which lost 27% of its value against the dollar in one year.

Demand in the domestic market has meanwhile increased, thanks to the government’s allocation of some 600 reais ($112) over 5 months to more than 60 million people, to help limit the economic impact of the coronavirus crisis on the nation’s poor.

The business sector is also concerned over difficulties faced by President Jair Bolsonaro’s government in advancing its austerity reform program.

Brazil entered a recession in the 2nd quarter, with a record 9.7% GDP contraction, but forecasters were initially more pessimistic. – Rappler.com