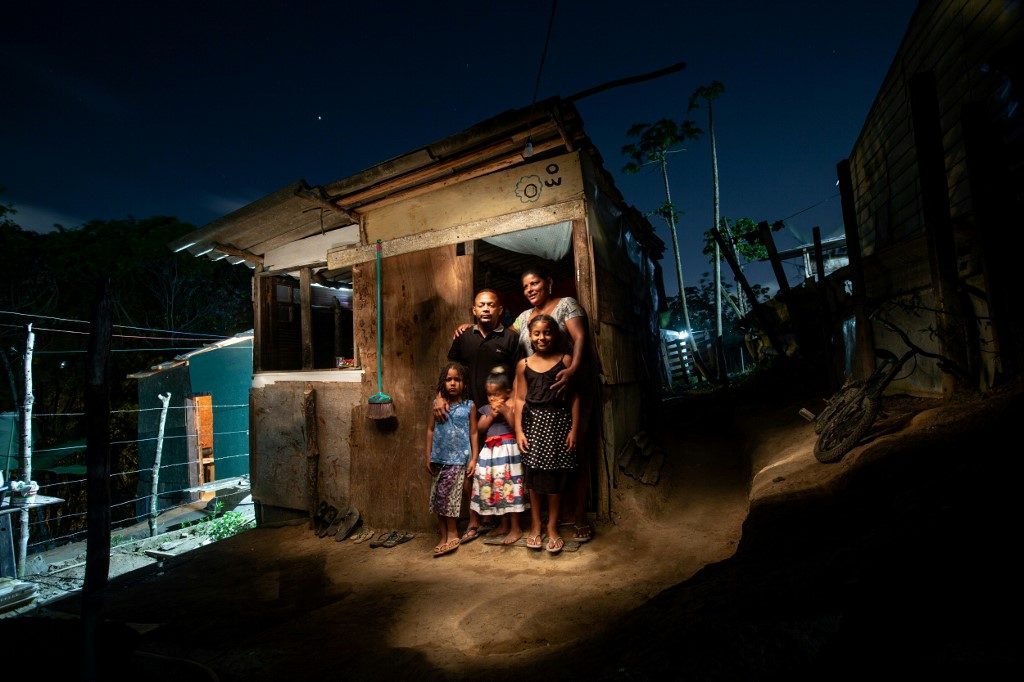 AID WORRIES. Antonio Pedro de Souza (2nd L), 42, a painter who has been out of work since the beginning of the pandemic, poses for a picture next to his wife (R), Ilma Silva Santos, and their children at their home at Manuel Faustino squatter camp in Brazil on October 16, 2020.

Facebook Twitter Copy URL
Copied
Coronavirus relief payments for over 67 million low-income workers in Brazil will expire at the end of 2020. Workers are unsure how their families will survive.

Since she and her husband lost their jobs because of the pandemic, Ilma Silva Santos, a construction worker from the slums of Salvador in northeastern Brazil, has been feeding her family of 5 thanks to government relief payments – now set to expire at the end of the year.

Asked how her family will survive after New Year’s, she says, “I don’t even know how to answer.”

Santos, her husband, and their 3 children live in a two-room shack in a squatter camp called Manuel Faustino on the city outskirts, where nearly everyone receives the COVID-19 relief payments – as do more than 67 million low-income workers in Brazil, nearly one-third of the population.

The money is not much. The payments started at 600 reais (about $110) a month in April, then were halved in September as President Jair Bolsonaro‘s government struggled to fund them.

But to people in Manuel Faustino, the difference between receiving that money or not is enormous.

When the benefit runs out, “I’m not going to live, I’m going to survive,” said resident Jaira Andrade do Nascimento, 37, outside her small shack, one of about 60 that line the settlement’s 3 dirt streets.

“300 reais isn’t a lot, but at least with that we knew we’d be able to buy food,” said another resident, Juraci Andrade dos Santos, 26, a barber who lost his job when the pandemic started.

Brazil – Latin America’s biggest country, with 212 million people – has the second highest death toll in the pandemic, after the United States, with more than 173,000 people killed.

The health crisis has also battered the economy.

Unemployment is at a record-high 14.6%, and would be higher if nearly 6 million workers had not given up looking for jobs.

Against that backdrop, the emergency aid has become a political, socioeconomic, and budgetary hot potato.

Bolsonaro won the presidency in 2018 on a platform of austerity and budget-cutting reforms. But he embraced the massive aid payments when they boosted his approval ratings.

The far-right president’s popularity plunged early in the pandemic over his controversial handling of the disease, which he downplayed as a “little flu.” But then it rebounded to around 40%, the highest of his term.

Pollsters found he was performing particularly well among Brazilians receiving the aid payments.

“That leads you to believe that after the stipend ends, his approval rating will decline,” said political scientist David Fleischer of the University of Brasilia.

Up for reelection in 2022, Bolsonaro has been scrambling to keep up the payments.

But they are hugely expensive. They have cost more than 615 billion reais so far, exploding the budget deficit.

The Bolsonaro administration has explored various ways to keep the program going, but has not managed to make the math work without breaking Brazil’s constitutionally mandated spending cap next year.

That would put the president at odds with his backers in the business world and his deficit-hawk economy minister, Paulo Guedes.

“The president would like to extend the emergency stipend for as long as possible, but he is also fearful of a crisis in confidence in the markets,” Silvio Cascione, Brazil director for the consultancy Eurasia Group, told Agence France-Presse.

Bolsonaro appeared to back down Tuesday, December 1.

“Some people want to perpetuate certain benefits. But nobody should live like that. It’s the surest path to failure,” he said.

The sheer size of the program shows Brazil’s deep inequalities.

The number of Brazilians benefitting from the aid payments is nearly twice as high as the number with formal jobs.

Brazil was already one of the 10 most unequal countries in the world, according to World Bank figures.

Experts say the pandemic has only made things worse, hitting the poor hardest in both health and economic terms.

In Manuel Faustino, that adds up to hard choices, now about to get harder.

Even with the emergency aid, “buying face masks and hand sanitizer is difficult. Either you buy those things or you eat,” said community leader Miralva Alves Nascimento, 61.

When the aid ends, she said, “I’m going to have to tighten my belt even more. Stop drinking coffee every day and save wherever I can.” – Rappler.com