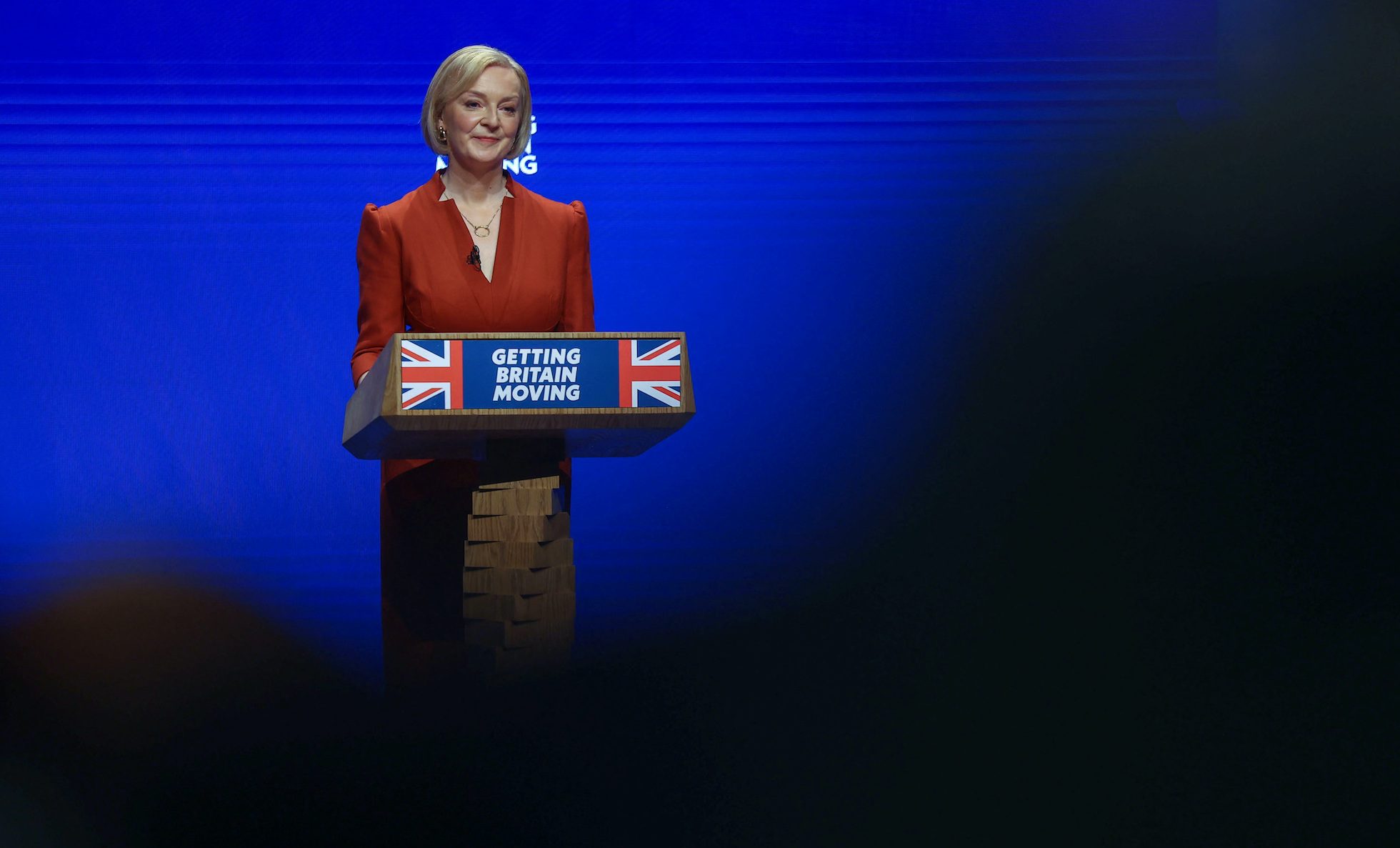 Facebook Twitter Copy URL
Copied
British Prime Minister Liz Truss is reportedly considering allowing a rise in corporation tax to take place in April 2023, something she promised to halt in her bid to be UK leader

Discussions were underway in Downing Street over whether to scrap elements of the plan which caused turmoil in financial markets the moment it was announced by finance minister Kwasi Kwarteng three weeks ago, Sky News said, citing sources.

The Sun newspaper said Truss was considering allowing a rise in corporation tax to take place next April, something she promised to halt in her bid to be prime minister, in which she vowed to sweep away the “orthodoxy” of economic policy.

Kwarteng, asked repeatedly in an interview with BBC television whether the reports of a change of policy on corporation tax were accurate, said that he was focused on his growth plan.

“Our position hasn’t changed. I will come up with the medium-term fiscal plan on the 31st of October, as I said earlier in the week, and there will be more detail then,” he said on the sidelines of International Monetary Fund (IMF) meetings.

Kwarteng is due to announce his medium-term budget plans on October 31, alongside independent fiscal forecasts.

Truss is under huge pressure within her Conservative Party to change her push for 43 billion pounds ($48.8 billion) of unfunded tax cuts as polls show her support has collapsed and investors have balked at the potential impact on the public finances.

Some lawmakers have pondered whether she should be removed from the job only a month after becoming Britain’s fourth prime minister in just six years since the Brexit referendum.

The pound, which has fallen sharply since Truss emerged as the front-runner to enter Downing Street in August, leapt on the reports and was up almost 2.5% against the US dollar shortly after 5 pm (1600 GMT) on Thursday.

Kwarteng, asked by the BBC about any discussions going on back in London to tear up his package, said, “I speak to the prime minister all the time, and we are totally focused on delivering the growth plan.”

He and Truss bowed to pressure earlier this month and ditched part of the mini-budget which would have eliminated the top rate of income tax, something they had said would help spur Britain’s sluggish economic growth rate. The IMF has said it would worsen inequality.

The government has repeatedly said it will stick to the rest of the tax cut plans while also protecting public spending, but economists and critics say something has to give.

In a sign of how far Britain’s reputation for sound economic management and institutional stability has fallen, the head of the IMF, Kristalina Georgieva, said on Thursday she had told Kwarteng of the importance of “policy coherence and communicating clearly.”

“I do believe that it is correct to be led by evidence. If the evidence is that there has to be a recalibration, it is right for governments to do so,” she told reporters.

Truss has quickly run into deep opposition to her leadership even among some Conservative lawmakers, many of whom who never wanted her to replace Boris Johnson as leader.

“If I was Liz Truss I wouldn’t wait to be thrown out of office by my party. I hope I’d resign,” Tim Montgomerie, founder of the influential ConservativeHome website, said on Twitter.

“Given the pain being caused to the real economy by the financial turbulence, it’s not clear why it is in anyone’s interests to wait 18 more days before the inevitable U-turn on the mini-budget,” he said on Twitter.

Asked if he and Truss would still be in their jobs next month, Kwarteng replied: “Absolutely, 100%. I’m not going anywhere.”

Earlier, Foreign Minister James Cleverly had warned that a change of leader would be “a disastrously bad idea, not just politically but also economically.”

Under current rules, lawmakers can only write letters to call for a no-confidence vote when the leader has been in place for a year. But that convention might not hold after a fire-sale in the government bond market drove up borrowing costs and mortgage rates and forced the Bank of England (BoE) to intervene to protect pension funds caught up in the market chaos.

The BoE’s emergency bond purchases are due to end on Friday, October 14. Many analysts have said it might have to maintain some kind of support given the fragility of the bond market.

“A central bank is like a doctor: if the patient is really ill, and even if the patient has misbehaved, it is very difficult for a doctor to walk away,” said Mohamed El Erian, chief economic adviser at Allianz.

But Larry Fink, chief executive of US investment behemoth BlackRock, said British government bond prices suggested that a great part of so-called liability-driven investment funds at the center of the chaos had been “reconstructed.”

There are signs however that the rise in borrowing costs is feeding through into the real economy.

The Royal Institution of Chartered Surveyors said on Thursday that house prices showed the weakest growth in September since early in the coronavirus crisis and they look set to fall with mortgage rates recently jumping further.

The country’s largest homebuilder, Barratt, has flagged a plunge in reservations in recent months, causing it to issue a profit warning after what has been a robust few years for the sector. – Rappler.com