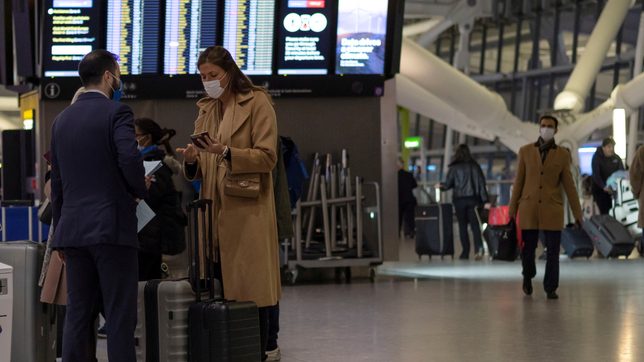 TRAVEL. A passenger talks with an employee as she checks-in for an American Airlines flight between London and New York, at Heathrow Airport in London, Britain, November 8, 2021.

The boss of the British Airways owner, International Airlines Group (IAG), said on Monday, November 22, its transatlantic bookings had already reached nearly 100% of 2019 levels after the United States dropped restrictions earlier this month.

Airlines such as BA and Virgin Atlantic had pinned their hopes on the reopening of the Europe to United States routes as vital to rebuilding their finances, after more than 18 months of restrictions left them nursing billions of dollars of debt.

Luis Gallego told the Airlines UK conference that the group was recovering, and he expected a return to pre-pandemic flying levels by 2023.

“Now as the world opens up, we are growing our capacity,” he said. “Transatlantic bookings have already reached almost 100% of 2019 levels. I expect North Atlantic routes to reach full capacity by next summer.”

Gallego warned however that a move by London’s Heathrow Airport to hike charges could hit the recovery, and he noted that the 40% of passengers who use the airport to transit on to different final destinations could use alternative hubs.

The UK’s Civil Aviation Authority has made an initial proposal for Heathrow to be allowed to charge as much as 50% more per passenger over the 2022-2027 period.

“If the rise in landing charges goes ahead, I know IAG would not be alone in reconsidering our airlines’ use of Heathrow as a port,” he said. “Right now, aviation is trying to emerge from its worst crisis ever. UK operators need to be able to compete.” – Rappler.com