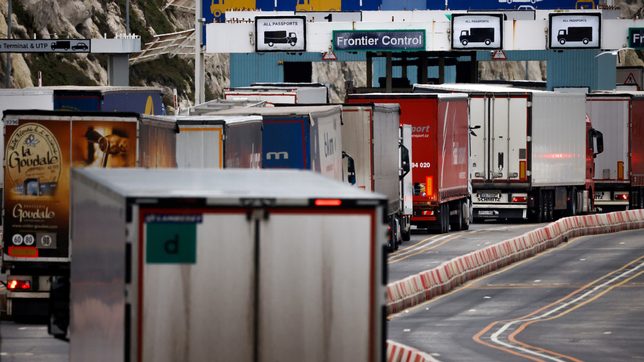 TRADE. Trucks queue at border control for the port of Dover after the end of the Brexit transition period, in Britain, January 15, 2021.

The British meat industry warned on Wednesday, March 24, of a permanent loss of export trade with the European Union of between 20% and 50% even after post-Brexit “teething problems” are ironed out.

Additional checks and paperwork for British exports since the country’s December 31 exit from the EU’s single market and customs union have led to delays and higher costs for many businesses.

Britain’s relations with the bloc, meanwhile, have soured over COVID-19 vaccines and accusations from both sides that the other is acting in bad faith over their Brexit divorce and trade agreements.

In the first 6 weeks of the year, Britain’s EU meat exports were at 50% of average levels last year, the British Meat Processors Association (BMPA) said.

The BMPA warned that the situation will not improve much under the current post-Brexit trading regime and called on the government to reengage with the meat industry and the EU to work out detailed and lasting solutions.

“Dismissing trade disruption at the borders as short-term ‘teething problems’ is no longer credible. British meat companies are painting a very different picture,” it said.

Britain’s goods exports to the EU in January slumped 40.7% from December, according to the Office for National Statistics (ONS), but the government says the figures were inflated by pre-Brexit stockpiling, COVID-19 restrictions, and other “teething problems.”

Under a Brexit deal reached in late December, British trade with the EU remains free of tariffs and quotas on goods, but exporters – especially sellers of fresh produce – say their businesses are still threatened by increased costs and delays.

The meat industry faces up to 120 million pounds ($164 million) of extra costs a year to trade with the EU, the BMPA said, adding that it takes up to 3 days to send goods to the continent, leading EU customers to cancel orders.