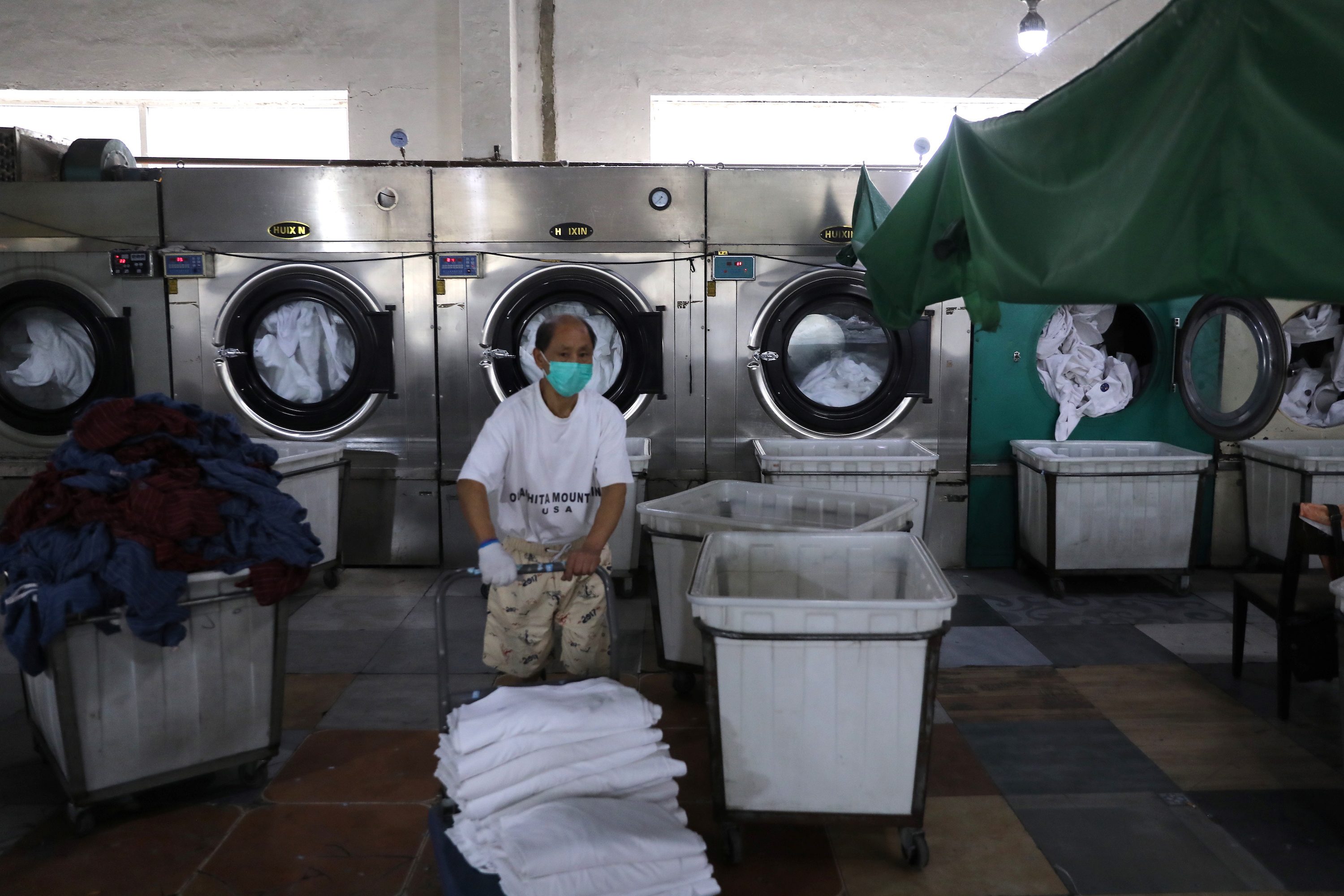 LAUNDRY BUSINESS. A worker moves clean linen at a laundry in an industrial park in Shenyang, Liaoning province, China, September 30, 2021.

Small firms caught in China’s prolonged energy crunch are turning to diesel generators, or simply shutting shop, as coal industry officials voiced fears about stockpiles ahead of winter and manufacturing shrank in the world’s No. 2 economy.

Beijing is scrambling to deliver more coal to utilities to restore supply as the northeast grapples with its worst power outages in years, particularly the three provinces of Liaoning, Heilongjiang, and Jilin, home to nearly 100 million people.

Gao Lai, who runs an industrial laundry service in Shenyang, the capital of Liaoning, said he was losing money after the power crunch forced him to hire a diesel generator.

“We can afford it for just four days, but if it’s for longer, then the costs are too much, so we can’t survive,” he told Reuters.

“We are willing to make it work because the country needs it, but if [power curbs continue] in the long run, we have to think of a way out.”

The curbs were triggered by shortages of coal, which fuels about two-thirds of China’s power generation.

Thermal coal futures closed Thursday, September 30, up 4.2% on the Zhengzhou Commodity Exchange after hitting an all-time high of 1,408 yuan ($218) per ton.

The contract surged 96% in the July to September period on tight supplies and strong demand, its biggest quarterly jump since the first quarter of 2017, spurring the exchange to adopt trading limits.

Since last week, more than 100 companies from electronic component manufacturers to gold miners have notified stock markets of production suspensions. Some have said they resumed production in the last two days, however.

The strain comes as the China Coal Industry Association warned it was “not optimistic” about supplies ahead of winter, the peak season for demand, and added that power plant inventories were now “obviously low.”

It urged companies to “spare no effort” to boost supply and focus on sales to smaller, high-energy consumers who have not signed long-term supply contracts.

Although coal production hit a record in August, analysts with Chinese investment bank CICC said a recent spate of mine accidents had made regulators more cautious about approving expansions in output.

They said imports, down 10.3% on the year in the January to August period, were unlikely to rise significantly over the rest of 2021 and more local production had to be “freed.”

In Shenyang, staff at a steel parts factory that has been shut for the last few days said they had not yet rented a generator but might do so if rationing continued.

Zhai Junwang, manager of a company that rents standalone diesel-fired generators, said brisk business in recent days had led to a doubling in rates.

“There’s very limited stock,” he said, but added that he did not expect the situation to last, as most small factories using his generators were losing money.

The government has said its priority will be to guarantee household power and heating supplies over the winter, as state-run energy firm Sinopec pledged to boost imports of liquefied natural gas.

But Citi analysts said in a note they expected power shortages to persist in the peak winter season for heating, most of it coal-fired.

Experts are pressing for fundamental reforms to China’s energy system.

The crisis was caused not by supply shortages but an inflexible grid system, said Zhang Boting of industry research group the China Society for Hydropower Engineering.

“The solution…isn’t simply relying on increasing power generating capacity, but boosting the ability of the grid to adjust peaks and solve the serious mismatches between energy loads and energy supplies,” he said on the group’s website. – Rappler.com