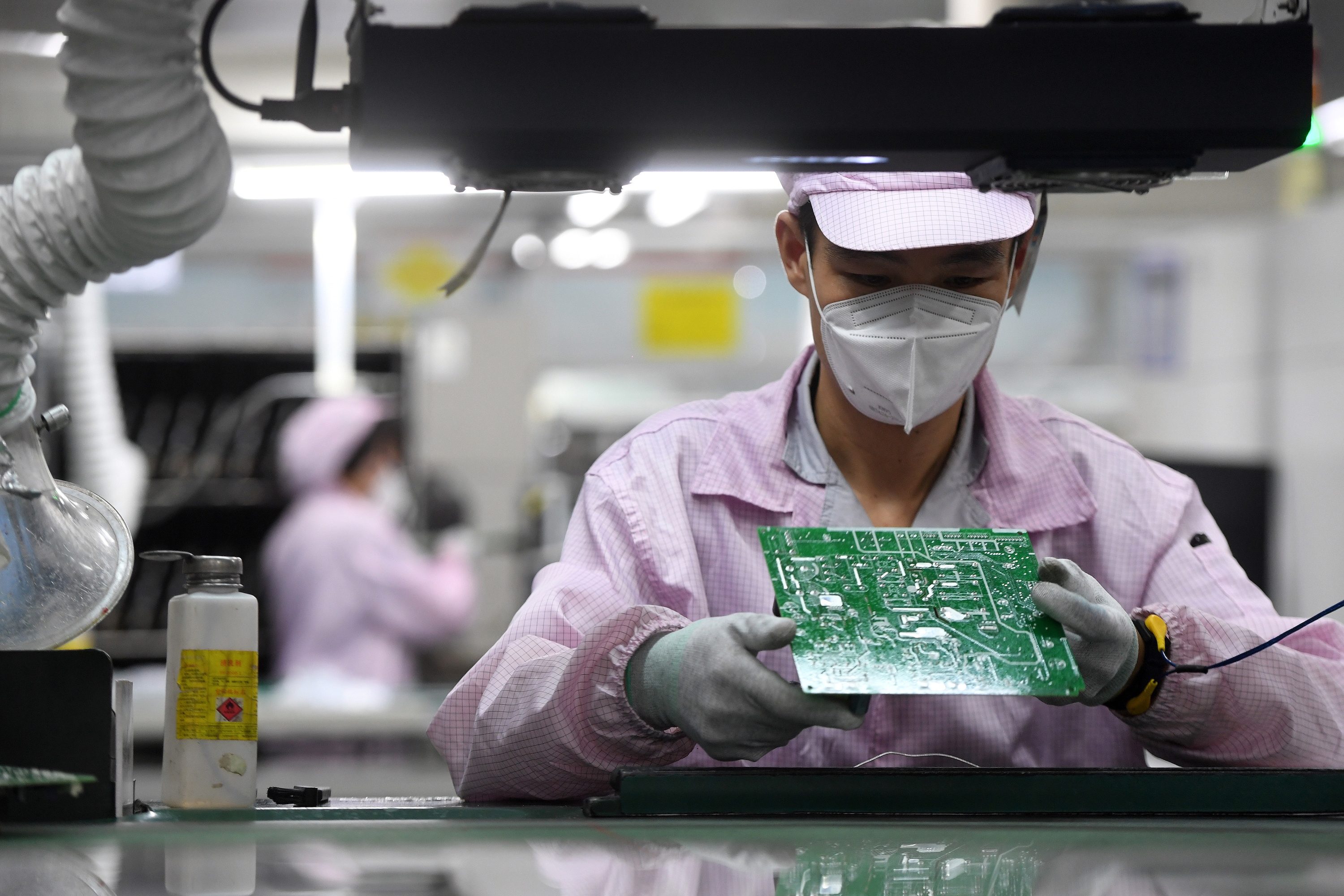 FACTORY WORK. An employee inspects a circuit board on the controller production line at a Gree factory in Wuhan, Hubei province, China, August 16, 2021.

China’s businesses and the broader economy came under increasing pressure in August as factory activity expanded at a slower pace while the services sector slumped into contraction, raising the likelihood of more near-term policy support to boost growth.

The official manufacturing Purchasing Managers’ Index (PMI) fell to 50.1 in August from 50.4 in July, data from the National Bureau of Statistics (NBS) showed on Tuesday, August 31, holding just above the 50-point mark that separates growth from contraction.

Analysts polled by Reuters had expected it to slip to 50.2.

“The worse-than-expected August PMIs add conviction to our view that the growth slowdown in H2 could be quite notable,” Nomura economists wrote in a note.

“We expect Beijing to maintain its policy combination of ‘targeted tightening’ for a few sectors, especially the property sector and high-polluting industries, complemented by ‘universal easing’ for the rest of the economy.”

Nomura is not alone in its views as many other analysts also expect the central bank to deliver a further cut to the amount of cash banks must hold as reserves later this year to lift growth, on top of last month’s cut which released around 1 trillion yuan ($6.47 trillion) in long-term liquidity into the economy.

The manufacturing PMI showed demand slipped sharply, with new orders contracting and a gauge for new export orders falling to 46.7, the lowest in over a year. Factories also laid off workers, at the same pace as July.

Adding to signs of a broadening economic slowdown, COVID-19-related restrictions drove services sector activity into sharp contraction for the first time since the height of the pandemic in February last year.

The official non-manufacturing PMI in August was 47.5, well down from July’s 53.3, data from the NBS showed.

While most of the weakness should reverse with relaxing COVID-19 restrictions, tight credit conditions and weakening foreign demand will continue to weigh on China’s economy, he said.

“This epidemic in multiple provinces and locations was a fairly big shock to the services industry, which is still in recovery,” said Zhao Qinghe, of the NBS.

Catering, transportation, accommodation, and entertainment industries were most affected, said Zhao. Construction activity accelerated to the fastest pace since March.

There are signs China may have largely contained the latest coronavirus outbreaks, with zero locally transmitted cases reported on August 30, for the third day in a row.

But it spurred authorities across the country to impose measures including mass testing for millions of people as well as travel restrictions of varying degrees and port shutdowns.

Meishan terminal at China’s Ningbo port resumed operations in late August after shutting down for two weeks due to a COVID-19 case. The closure caused logjams at ports across the country’s coastal regions and further strained global supply chains amid a resurgence of consumer spending and a shortage of container vessels.

The official August composite PMI, which includes both manufacturing and services activity, fell to 48.9 from July’s 52.4. – Rappler.com