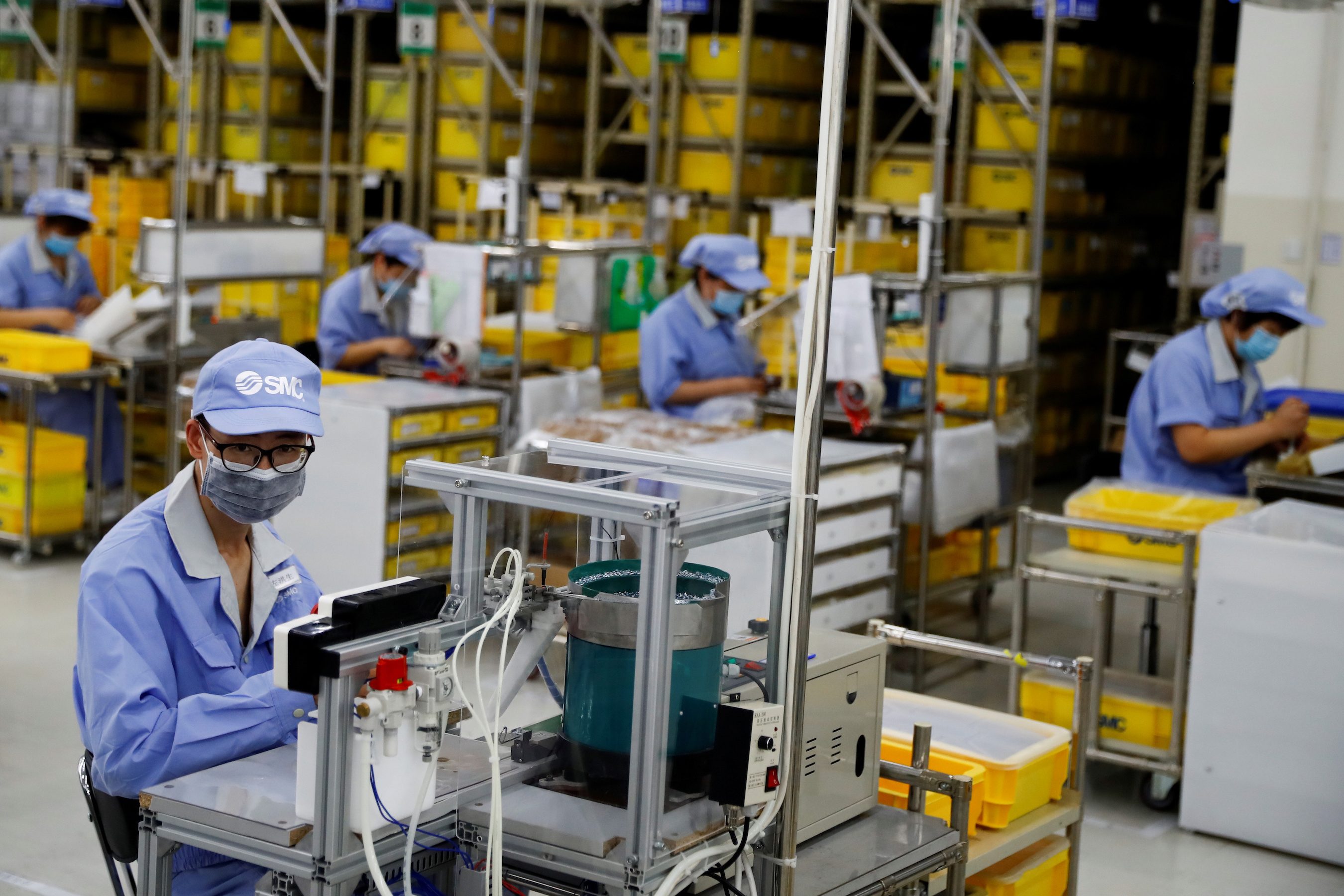 FACTORY OUTPUT. Employees work at a factory of component maker SMC during a government-organized tour of its facility in Beijing, China, May 13, 2020.

China’s factory activity grew at the slowest pace in 5 months in January, hit by a wave of domestic coronavirus infections, but still in line with the ongoing recovery in the world’s second largest economy.

The official manufacturing Purchasing Managers’ Index (PMI) fell to 51.3 in January from 51.9 in December, the National Bureau of Statistics said in a statement on Sunday, January 31.

It remained above the 50-point mark that separates growth from contraction on a monthly basis, but was below the 51.6 expected in a Reuters poll of analyst forecasts.

In January, mainland China reported more than 2,000 local cases of the coronavirus. While the number was small compared with other countries, authorities were concerned about transmission risks during the Lunar New Year travel rush – the world’s biggest annual human migration spanning 40 days from January to February.

During the month, several large cities were locked down with tens of millions tested for COVID-19, interrupting factory activity and weighing on the services sector, including logistics and transportation.

“The recent localized epidemic has had a certain impact on the production and operation of some enterprises, and the overall expansion of the manufacturing industry has slowed,” said Zhao Qinghe, an official at the statistics bureau.

“The period before and after the Lunar New Year is also traditionally an off-season for the country’s manufacturing industry,” Zhao said in an accompanying statement.

The new coronavirus outbreak, mostly in the north, is expected to be a temporary restraining factor while China’s vast industrial sector continues to find strength in resilient export demand.

The official PMI, which largely focuses on big and state-owned firms, showed the subindex for new export orders stood at 50.2, expanding for the 5th straight month, though down from 51.3 in December.

Economic indicators ranging from trade to producer prices all suggest a further pickup in the industrial sector.

A subindex for small firm activity stood at 49.4 in January, up from December’s 48.8.

China’s gross domestic product grew 2.3% on year in 2020, making it the only major economy in the world to dodge a contraction last year as many nations struggled to contain the COVID-19 pandemic.

In the services sector, activity expanded for the 11th straight month, the statistics bureau said, albeit at a slower clip, weighed by the latest COVID-19 outbreaks. – Rappler.com