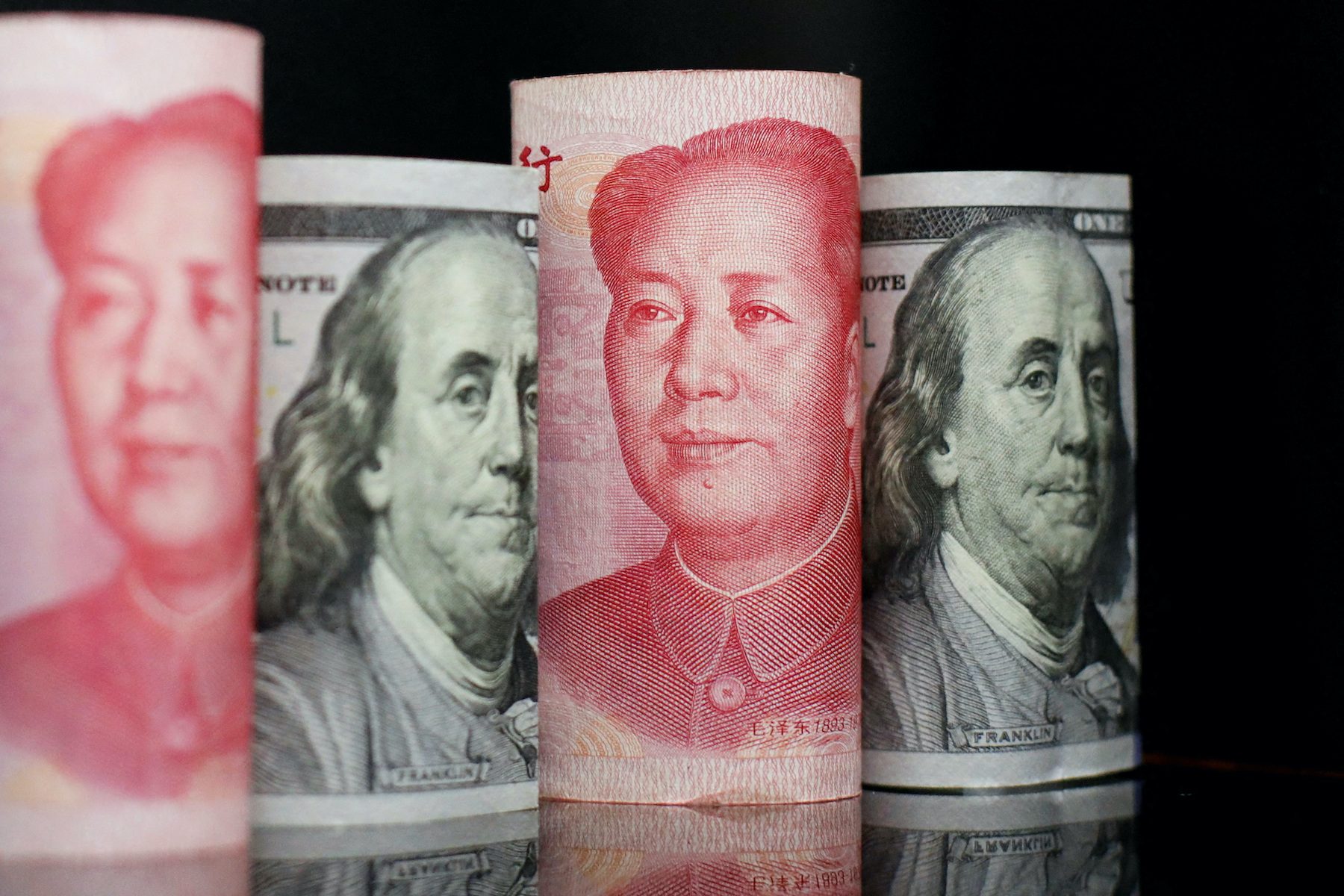 CURRENCIES. Chinese yuan and US dollar banknotes are seen in this illustration picture taken September 29, 2022.

Facebook Twitter Copy URL
Copied
While the yuan, or renminbi, has been making gradual inroads into Russia for years, the crawl has turned into a sprint in the past nine months

Chinese entrepreneur Wang Min is delighted about Russia’s embrace of the yuan. His LED lights company can price contracts to Russian customers in yuan rather than dollars or euros, and they can pay him in yuan. It’s “win-win,” he says.

Wang’s plans have been transformed by the conflict in Ukraine and the subsequent Western sanctions on Moscow that have shut Russia’s banks and many of its companies out of the dollar and euro payment systems.

His contract manufacturing business with Russia has been small in the past, but now he’s preparing to invest in warehousing there.

“We hope that next year sales in Russia can account for 10% to 15% of our total sales,” said the businessman from China’s southern coastal province of Guangdong, whose annual revenue of about $20 million mainly comes from Africa and South America.

Wang is seeking to capitalize on a rapid “yuanization” of Russia’s economy this year as the isolated country seeks financial security from Asian powerhouse China. He sees a win-win situation in Chinese exporters reducing their currency risks and payment becoming more convenient for Russian buyers.

While the yuan, or renminbi, has been making gradual inroads into Russia for years, the crawl has turned into a sprint in the past nine months as the currency has swept into the country’s markets and trade flows, according to a Reuters review of data and interviews with 10 business and finance players.

Total transactions in the yuan-rouble pair on the Moscow Exchange ballooned to an average of almost 9 billion yuan ($1.25 billion) a day last month, exchange data analyzed by Reuters showed. Previously, they rarely exceeded 1 billion yuan in an entire week.

“Everybody was motivated and even pushed towards the rouble or other currencies including, and first of all, the renminbi.”

Indeed, yuan-rouble trading totaled 185 billion yuan in October, more than 80 times the level seen in February when Russia launched what it refers to as a “special military operation” in Ukraine near the end of the month, according to exchange data.

The surge of interest has seen the yuan’s share of the currency market jump to 40% to 45% from less than 1% at the start of the year, said Dmitry Piskulov, international projects head at the Moscow Exchange’s foreign-exchange market department.

By comparison, the dollar/rouble pair, which commanded more than 80% of trading volumes on the Russian market in January, has seen its share drop to about 40% as of October, according to exchange data and the central bank.

The US Treasury declined to comment on the yuan’s growing presence in Russia.

Until April, Russia didn’t even make the top 15 list of countries using the yuan outside mainland China, in terms of the value of inbound and outbound flows, according to data from global financial networking system SWIFT.

It has since jumped to No. 4, lagging only Hong Kong, the city’s former colonial ruler Britain, and Singapore.

To put this in a global context, though, the dollar and euro are still by far the dominant currencies, representing more than 42% and 35% of flows respectively as of September this year. The yuan has risen to almost 2.5% from below 2% two years earlier.

Wang’s business optimism is echoed by Shen Muhui, who heads a trade group for small exporters to Russia in neighboring Fujian province. He said more and more Russian buyers were opening yuan accounts and settling transactions directly in the Chinese currency, which he said was a big advantage.

“The Russia-Ukraine conflict has brought opportunities for Chinese businessman,” said Shen, adding that his association had received many inquiries from Chinese companies interested in doing business in Russia.

It’s not only Chinese companies, or small companies, joining the yuan train.

Seven Russian corporate giants, including Rusal, Rosneft, and Polyus, have raised a total of 42 billion yuan in bonds on the Russian market, according to Reuters calculations, and the list could grow with No. 1 lender Sberbank and oil firm Gazpromneft saying they’re also considering renminbi debt.

Aluminum producer Rusal, which buys raw materials from China and then sells a large chunk of its finished goods there, told Reuters it had stepped up the share of yuan used in those purchases and sales this year, and that the share would continue to rise, though it declined to provide a detailed breakdown.

Xi and Putin: ‘No limits’

While President Vladimir Putin has long sought to reduce Russia’s reliance on the dollar, geopolitics has turbocharged this trend in 2022.

China, the world’s No. 2 economy, is the biggest global power not to join economic sanctions against Russia. Indeed, Putin and Chinese President Xi Jinping sealed a “no limits” partnership in February, weeks before Moscow launched what it describes as a “special military operation” in Ukraine.

The yuan comprised about 19% of Russia’s trade settlements with China in 2021 versus the dollar’s 49% share, Andrey Melnikov, deputy director at international cooperation department at the Russian central bank, said in September.

While 2022 figures haven’t been published yet, the Chinese currency is gaining ground, according to Melnikov, who told a conference that demand for yuan liquidity had risen sharply due to reduced access to traditional payment methods and the freezing of its overseas gold and foreign exchange reserves.

The central bank declined to comment for this article.

Bank governor Elvira Nabiullina is tracking the growth, telling lawmakers this month that the influx of yuan illustrated a “transformation of the currency composition of our economy.”

Regulators are also aware of potential perils, such as a disparity between a growing number of yuan-held current accounts and deposits of the currency, with yuan-denominated lending only starting to develop.

The central bank has said lenders should seek to reduce the growing risks of yuanization of their balance sheets – or gaps between yuan assets and liabilities – by increasing payments in yuan for imports, investing in yuan-denominated securities, or using yuan in trade transactions with other countries.

Regulators do not plan to limit yuan usage now and may encourage banks to use more by relaxing provisioning requirements for the currency while tightening them for dollars and euros, Elizaveta Danilova, director at the central bank’s financial stability department, told a conference this month.

Akopian at Caderus Capital said some Russian brokerages reported that their clients were keeping an increasingly large part of their assets in yuan.

The inflows have led to a broad fall in interest rates on yuan deposits within Russia. They range from 0.01% to 2.45% for one-year yuan deposits in Russia, compared with 1.6% for one-year deposits on the mainland, according to Russian banking aggregators and major Chinese banks.

“You can open a renminbi account in most Russian banks already. Interest rates are very low, because there is an abundance of renminbi in investors’ pockets,” Akopian added. “That’s why as soon as any renminbi product comes to the market, it becomes very popular. There’s great demand.”

Some small Russian savers are also getting onboard, seeking to hedge against rouble uncertainty.

Andrey, a communications specialist from Moscow who said he relocated to Dubai in September to avoid being called up to fight in Ukraine, bought both yuan and dirhams online through his Russian bank, as a safety play before he left.

“I see it as a way to save my funds from an unpredictable drop in the rouble value,” said the 35-year-old, who asked for his surname to be withheld because he evaded the mobilization.

“I can convert my roubles to these alternative currencies, but it’s more like buying a share or a bond.” – Rappler.com