As uncertainty looms over cash-strapped China Evergrande Group, seizing up China’s junk bond market, pressure is building on its peers to access fresh funding to repay notes worth nearly $300 billion due over the next two years.

Once its top-selling developer, Evergrande now looms as one of China’s largest-ever restructurings as a crackdown on debt ends a freewheeling era of building with borrowed money which became infamous for ghost cities and roads to nowhere.

Evergrande will default on a dollar bond if it fails to pay interest due on Thursday, September 23, within 30 days, and the risk is that a messy liquidation drags down the whole property sector, which accounts for a quarter of the country’s gross domestic product.

The nervousness has resulted in a handful of Chinese real estate developers having their ratings downgraded by agencies as concern swirls about their debt and repayment abilities, which, in turn, will weigh on their borrowing costs.

Debt bankers said few companies were interested in tapping the market for fresh borrowings at the moment, as Evergrande’s fate remained unclear, and that any who must approach the market would probably have to pay up.

“Debt is being repriced and some developers may be shut out,” Michel Lowy, chief executive officer of asset management group SC Lowy, told Reuters. “Not the entire sector,” he said, but “investors will certainly be more careful about which developers to finance.”

Global investors have been on tenterhooks as debt payment obligations of Evergrande, laboring under a $305-billion mountain of debt, triggered fears its malaise could pose systemic risks to China’s financial system.

Chinese property developer bonds usually yield between 4% and 12%, if not higher, depending on their credit ratings and strength of their balance sheet and recent modest deals have been at the upper end of that range.

An index of high-yield Chinese debt has been tanking for months – even as global credits have rallied – as concerns at Evergrande’s predicament have seeped across the market.

An estimated $32 billion worth of bonds issued by Chinese developers are due to be refinanced by the end of 2021, according to Dealogic data, before major transactions expire in 2022.

Nearly $125 billion worth of developer debt – led by Evergrande which has five of the top 10 biggest maturations worth nearly $6.3 billion – is due next year, the Dealogic figures showed. A further $140.7 billion will mature in 2023.

The figures include both onshore and offshore bonds issued in dollars and yuan by Chinese developers.

“If we were to see a deal this week, the major response would be ‘well, there needs to be a premium,'” said a Hong Kong-based debt banker who could not be named as he was not authorized to speak to the media.

“No one has paid an Evergrande premium yet in the past few weeks but will they be paying that premium by the end of the year? We need to see how long this lasts.” 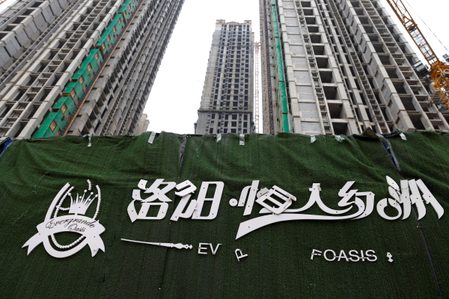 Money will find a way

China’s markets reopened on Wednesday, September 22, after holidays but were quiet in the lead-up to what is usually a busy period in October when firms have finalized their quarterly balance sheets and tend to look to tap markets.

Some Chinese property developers have begun asset sales and started looking for alternate funding sources, in one case shareholders, as widening spreads add to regulatory difficulties in accessing capital.

Guangzhou R&F Properties Company, which according to Fitch has $1.9 billion in debt maturing within 12 months, has already turned elsewhere – raising as much as $2.5 billion by selling a subsidiary and taking loans from its biggest shareholders.

Others are struggling, with shares in Sinic Holdings (Group) cratering almost 90% before being suspended from trade on Monday, after a Fitch outlook downgrade that has since been followed by a ratings cut to CCC+ by S&P on Tuesday, September 21.

Redsun and R&F declined to comment on Thursday and Sinic did not immediately respond to a request for comment.

“I don’t think the door of the capital markets will close completely for Chinese property developers, but it will be a matter of when and who is looking to raise money or refinance debt,” Jonathan Leitch, Hogan Lovells partner, told Reuters.

“There might be a small premium attached for some issuers, but there is so much liquidity in global markets currently that money will find its way to these companies.” – Rappler.com