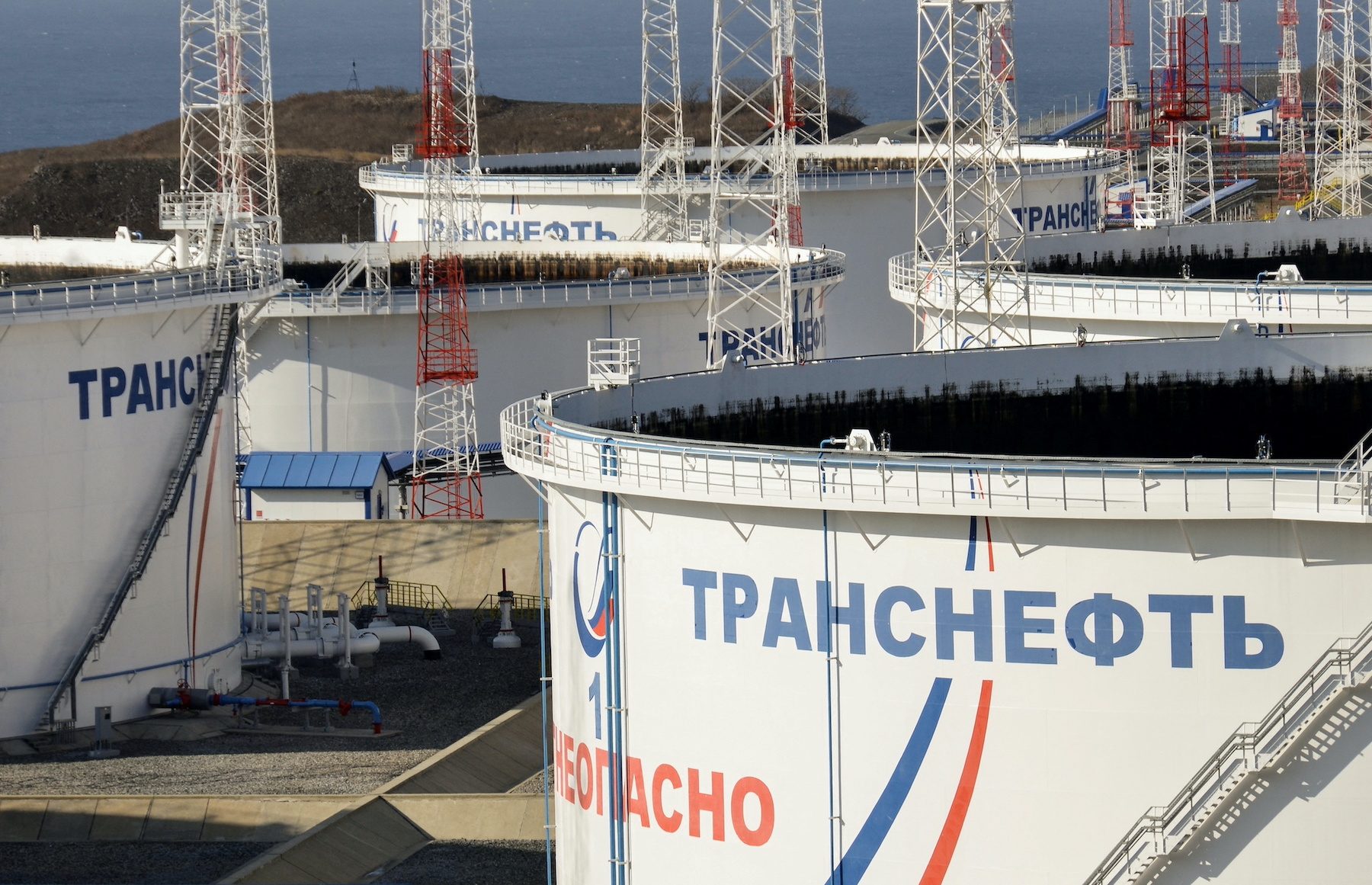 OIL. A general view of oil tanks in the Transneft-Kozmino Port near the far eastern town of Nakhodka, Russia, November 15, 2017.

LAUSANNE, Switzerland – Commodities traders such as Trafigura and Vitol have helped keep Russia’s oil flowing through its Baltic and Black Sea ports in March, when some Western firms started to snub the market, according to ship tracking, traders, and shipping sources.

Both Swiss-based trading houses have long-term deals with state-run Russian oil giant Rosneft to load crude under agreements struck before Moscow’s invasion of Ukraine triggered a wave of Western sanctions this month.

So far in March, the two companies combined have loaded 22 cargoes of Urals crude, equivalent to 2.32 million tons of oil or 16.7 million barrels, according to Refinitiv Eikon ship tracking data and sources. They shipped 1.84 million tons in February and 1.80 million in January.

The bulk of the oil the two companies buy comes from Rosneft, though a large chunk of the crude Vitol handles via Russian ports comes from Kazakh producers.

The purchases have not breached any restrictions imposed by the West and many European countries continue to buy Russian gas – even if some Western firms such as Shell and BP have stopped buying Russian oil in the spot market.

Other Swiss-based traders Glencore, Gunvor, and Petraco loaded Russian crude in March, though the volumes they took were slightly lower than in previous months, according to shipping data and information from traders.

The loading data offers an early indication of how the Ukraine conflict may be reshaping the global oil market as surging prices, volatility, and the threat of sanctions make it more difficult to trade.

With 12 cargoes of Urals to be loaded in March, according to the shipping data as of March 25, Trafigura is having its busiest month since June when it also loaded 12. Its monthly average since the start of 2021 through February was 8.3 cargoes, according to the data and trading sources.

Vitol’s 10 cargoes is on a par with February and January and broadly in line with an average of 9.6 since its deal with Rosneft started in October. Its monthly average for the first nine months of 2021 was 5.1 cargoes.

Benchmark Brent crude hit its highest level since 2008 this month on concerns about US and European bans on Russian oil imports. Urals crude, meanwhile, has been trading at record discounts to Brent prices.

Trafigura and Vitol told Reuters they were fulfilling existing contracts and had not struck any new deals for Russian oil since the Ukraine conflict, which Moscow calls a special operation, started on February 24. They did not comment on the volumes of Russian oil they have been buying.

While the long-term contracts are not public, three sources told Reuters that Trafigura has a deal running at least until next year while Vitol’s runs until at least October this year. The sources said the contracts gave the companies plenty of flexibility on how much oil they can buy each month.

“We are continuing to comply with our legal obligations arising under existing term agreements entered into prior to the war in Ukraine,” a Trafigura spokesperson said.

“We are taking every precaution to ensure we comply in full with applicable regulations and sanctions and we continue to engage with customers and governments to understand their requirements and provide the commodities and energy they need in severely disrupted commodities market,” the spokesperson said.

Deals for April are still being struck but so far Trafigura has lined up eight cargoes for the first 10 days of the month and Vitol has six. The companies are also offering Russian oil known as ESPO Blend, which is exported via Asian ports, in May.

The European Union banned transactions with several Russian energy companies including Rosneft on March 15. However, Brussels gave a two-month wind-down period for contracts already agreed and excluded purchases that were “strictly necessary.”

European oil refiners are currently studying what the new EU measures mean exactly for purchases of Russian crude and some are looking for oil from elsewhere while awaiting clarification, traders said.

Oil traders said they expected Trafigura and Vitol to press ahead with crude purchases from Rosneft in April and May, but possibly not at the volumes initially planned given the potential difficulties in selling the cargoes to EU buyers.

Most were early in the month and ordered before prior to the invasion, though Britain’s Shell snapped up a heavily discounted cargo of Russian oil from Trafigura on March 4. Shell had pledged a few days earlier to end its operations in Russia and later apologized for the trade after a hail of criticism.

Some cargoes of Urals due to be loaded by the Western firms in the second half of March have now been canceled. Shell, Neste, and TotalEnergies said they have stopped new spot purchases of Russian oil. Exxon did not immediately respond to a request for comment.

Trading house Petraco told Reuters the Russian oil it has loaded, or was due to load, was contracted prior to the Ukraine invasion and that it strictly complies with government policies.

Gunvor and Glencore both have Urals purchase tenders with Rosneft running from October through March this year and most of the Russian crude loaded fell under those contracts. Neither is expected to load any Rosneft oil in April, traders said.

Gunvor told Reuters it won’t do any new business with Russia while a source close to Glencore said it was only handling oil from pre-invasion contracts.

Russia plans to export 6.2 million tons of Urals crude from its Baltic ports and some 2.28 million via Novorossiisk in the Black Sea, according to the loading schedule for March.

While the ultimate destination of some cargoes may change, the total volume of Russian exports for March is expected to remain broadly in line with its plans before the invasion.

Most of the oil being shipped in March is due go to Europe, with about a third heading to India and China, shipping data shows.

However, traders said they expected about half the oil due to go to the Amsterdam-Rotterdam-Antwerp refining and storage hub would probably be offloaded onto bigger tankers and sent to Asia, given the reluctance of EU buyers to take Russian crude.

Litasco, the Swiss trading arm of Russia’s Lukoil, has one of the largest shares of Russian seaborne crude exports in March with some 1.5 million tons due to be loaded, according to shipping data. Litasco declined to comment.

China’s Unipec, the trading arm of Asia’s largest refiner Sinopec, took several Urals cargoes in March, tracking and trading sources said. Unipec did not respond to a request for comment.

Traders said several cargoes of Russian crude due to be loaded at the end of March did not have tankers lined up yet, raising doubts as to whether the loadings will happen.

While Swiss trading firms have been loading Russian oil, not all of their tankers have firm destinations at this point, three trading sources said.

“It’s one thing to load the oil, another to find the buyer,” one Urals crude trader said. – Rappler.com