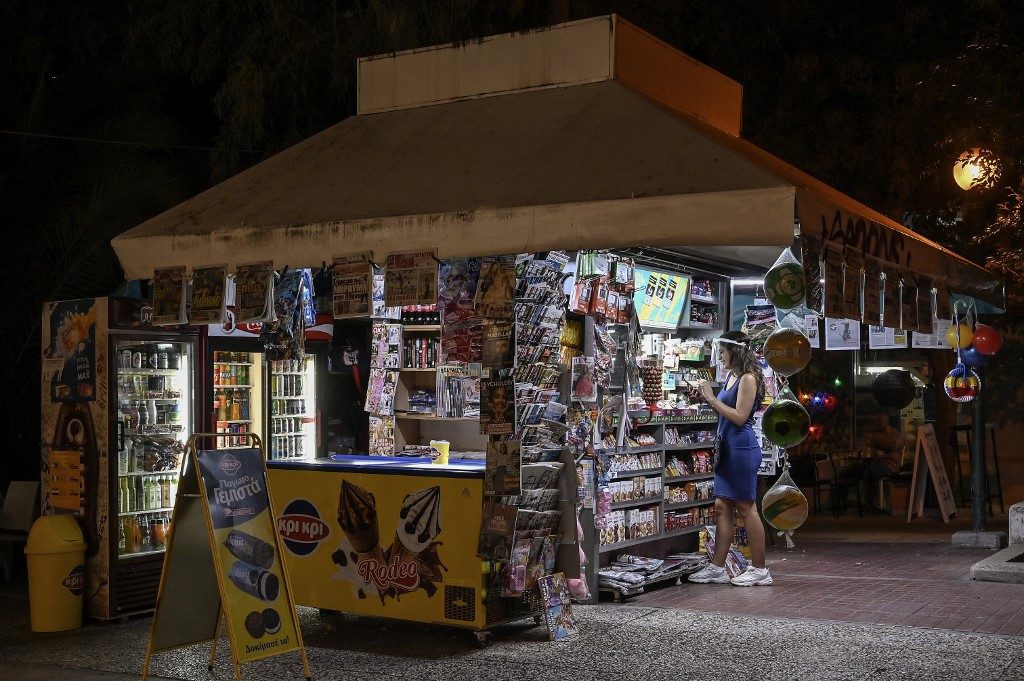 A woman wearing a face shield stands by a periptera – a town square kiosk selling beer, cigarettes, and newspapers – on a square of the Koukaki district, an area popular with tourists in Athens, on October 2, 2020. - Only about half of Greece's little kiosks across the country survived the economic crisis. At the end of September, because of the spike in the number of Covid-19 cases, the government ordered the closure of the kiosks from midnight to five o'clock in the morning to discourage after-hours bar crowds from gathering on squares. (Photo by LOUISA GOULIAMAKI / AFP)

Facebook Twitter Copy URL
Copied
'Many of my colleagues have shut down their kiosks in the center of Athens. I have endured, but for how long? The coronavirus is one more hardship for us,' says an owner of a Greek town square kiosk

Only about half of Greece‘s periptera, the little kiosks selling beer, cigarettes, and newspapers in town squares across the country, survived the economic crisis.

Now, those still standing face a fresh threat, from the coronavirus pandemic – and adding masks and gels to their inventory might not be enough to see them through.

A feature of the urban landscape and social life since 1911, many went out of business during the financial crisis that devastated the country between 2010 and 2018.

“During the financial crisis, out of 11,000 kiosks all over Greece, just 5,500 remained, 500 among them in Athens,” said Theodoros Mallios, the president of the kiosk owners union in Athens.

“These last months, I see more of them shutting down,” he added.

“The lockdown and the restrictive measures taken afterwards by the government might prove really difficult to overcome for our profession.”

Late in September, because of the spike in the number of coronavirus cases, mainly in big towns, the government ordered the kiosks to close from midnight to 5 am.

The idea was to discourage after-hours bar crowds from gathering at squares to buy liquor from the kiosks, most of which stay open into the small hours.

Panagiotis Karatsas, for one, keeps his open 24/7 at a spot near Athens’ central Syntagma square in a corner of the National Garden.

The new, enforced midnight shutdown has hit him hard, he said.

“With that measure, I’ve lost around 20% of my turnover, after already having endured two months of shutdown during the lockdown,” he added.

With the average Greek having less money to spend these days, and periptero owners facing heavy taxes, 40-year-old Karatsas said he had thought about giving up.

“Many of my colleagues have shut down their kiosks in the center of Athens. I have endured, but for how long? The coronavirus is one more hardship for us.”

“We are worried for our future,” he said.

“In the center of Athens, in Syntagma, the situation is worse than in other areas, because there are no residents,” he explained.

“Normally, we have as clients those working in offices, but now many of those are teleworking – and tourists, who this year have not visited the Greek capital.”

According to the Bank of Greece, during the first semester of the year, the number of foreign arrivals fell by more than 70%.

Karagiorgis does not know where he will find the 1,500 euros to renew his license with the city authorities, he added.

And Mallios is not even sure the city authorities want to renew those licenses.

“The municipalities want to give more space to the pedestrians and they are annoyed by the kiosks that are sticking out on squares and pavements.”

In the Petralona district, at the foot of the Acropolis, the cafes and restaurants in Merkouri Square are full to bursting.

Giorgos Siaplaouras, the kiosk owner there, was furious at the latest government measures.

“The measures are ridiculous and only promote the large supermarkets!

“Last night I closed at midnight but the square was full of people carrying coolers full of beers and other alcoholic drinks that they had purchased earlier from the supermarket,” he said.

“Shutting down the kiosks earlier won’t stop young people partying,” he said with a sigh.

Siaplaouras is a familiar face to locals.

Pensioner Dimitris Katsigiannis, 70, goes every morning to buy his newspaper at the kiosk, or just to chat with its owner.

“It’s a meeting point as much as the cafe,” he explained.

“During the 60s, when we didn’t have landlines in our homes, we came here to make our phone calls.

“Also, we would come to buy our newspapers – and candies for the children on Sundays.

“And now at my age, living alone, coming to the periptero is my daily walk, a way to have a break from my loneliness,” he added.

He cannot imagine his favorite place shutting down, he said.

“It would be dramatic. The whole neighborhood would lose its soul!” – Rappler.com