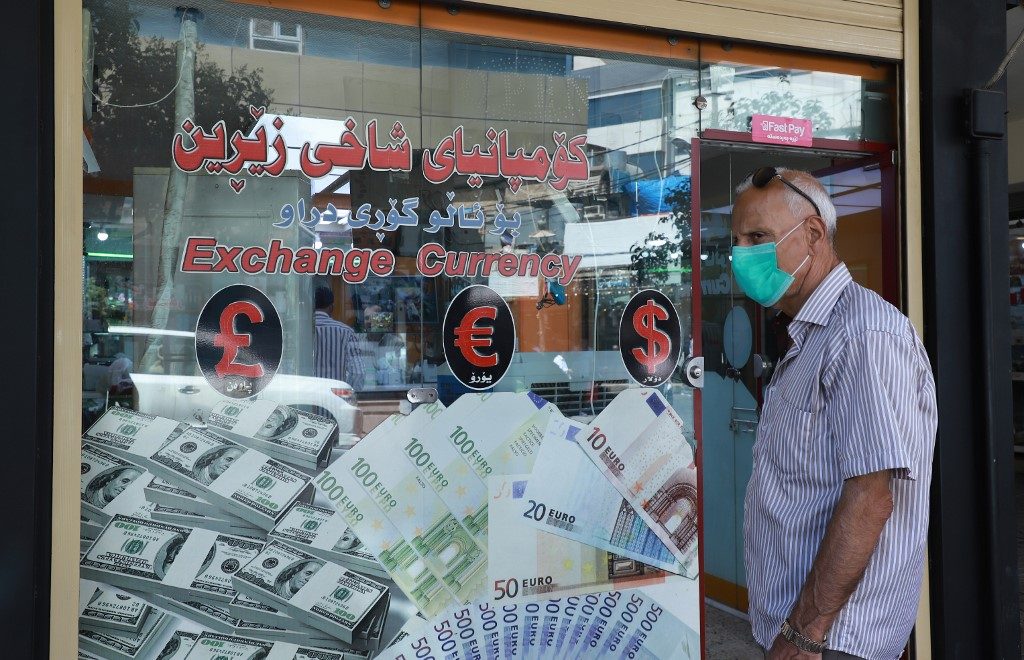 An Iraqi man, wearing a protective mask due to the COVID-19 pandemic, stands at the entrance of a money exchange office in Sulaimaniyah city in the Kurdish autonomous region of northern Iraq on August 4, 2020.

Facebook Twitter Copy URL
Copied
Traders in the Iraqi city of Sulaimaniyah, close to the border with Iran, see dramatic changes in the dollar-rial trade

In Iraq’s Kurdistan region and at the country’s Muslim Shiite holy sites, trading United States dollars for rials from Iran was once big business.

But the money exchange trade has been hard hit by lockdown restrictions to stop the spread of COVID-19, and by deep economic woes in both countries.

Traders in Sulaimaniyah, the second city of Iraqi Kurdistan and close to the border with Iran, have seen dramatic changes.

In March, before restrictions to stem the pandemic which has killed more than 5,000 Iraqis and infected more than 130,000 others, one dollar traded for 150,000 Iranian rials.

Tehran and Washington may be at loggerheads – coming close to open war in Iraq at the beginning of the year – but Iraqis have no problem keeping a mix of the rival banknotes in their wallets.

Betting on a rebound in the Iranian currency – and hoping the coronavirus crisis would pass quickly – many Iraqis rushed to snap up rials on the cheap.

The dollar-rial trade seemed like a welcome alternative income during the financial turmoil, which has destroyed countless livelihoods.

A survey by the International Rescue Committee (IRC) aid organization has found 87% of people questioned said they could no longer work because of the disease.

Iraq is going through its worst economic crisis in its recent history, hit by a slump in oil prices that account for almost all public revenues.

Government austerity cuts are expected to be severe.

“Since the appearance of coronavirus and the economic crisis it has caused, people who can no longer work are investing in Iranian currency to make their capital work,” said Saleh.

But the trader, a man with a small gray moustache sitting under a huge framed reproduction $100 bill, warned that not all had found profit in the gamble.

Many Iraqis use American dollars and their own dinars interchangeably, with the rates stable between the two currencies.

It is the big swings between dollars and Iran’s rial that attract those hopeful of winning on the difference.

American sanctions have long stifled the Iranian economy, and the closure of official border crossings between Iran and Iraq has added to the woes.

Hazar Rahim, a laborer in Sulaimaniyah, found this out the hard way.

“A few days ago, I bought 5 billion Iranian rials,” he told AFP. “I was betting on the market but I was taken by surprise. In a few hours, the rial dropped, and I’d lost 13,000 dollars.”

Two of the most holy sites for Shiites, Karbala and Najaf, are both in southern Iraq. Millions of Shiite pilgrims, the majority from Iran, visit every year.

They bring Iranian rials to spend and trade. In past years, the visitors brought in up to 5 billion dollars – crucial in a country where almost all tourism is to religious sites.

It also provided hundreds of thousands of jobs and accounted for around 2.5% of gross domestic product (GDP), according to official figures.

But with travel restrictions in place because of the virus, the shops and restaurants once busy with visitors are closed.

Iranian arrivals had already slowed amid deep economic woes at home since the United States in 2018 withdrew from the Iranian nuclear agreement and reinstated punishing sanctions.

The coronavirus in Iran – the worst in the region with more than 17,000 deaths and 310,000 infections – has only worsened the situation of the country.

The crisis has reduced Iran’s exports, causing devaluation and inflation.

According to the International Monetary Fund, Iran’s GDP is expected to shrink 6% in 2020, after contracting 7.6% last year.

In Iraq, meanwhile, tougher times loom as well. The economy is expected to contract almost 10% this year.

But with few apparent alternatives, dozens of Iraqis keep coming to the money traders in the hope that times will change, the rial will rise, and they can cash in. – Rappler.com