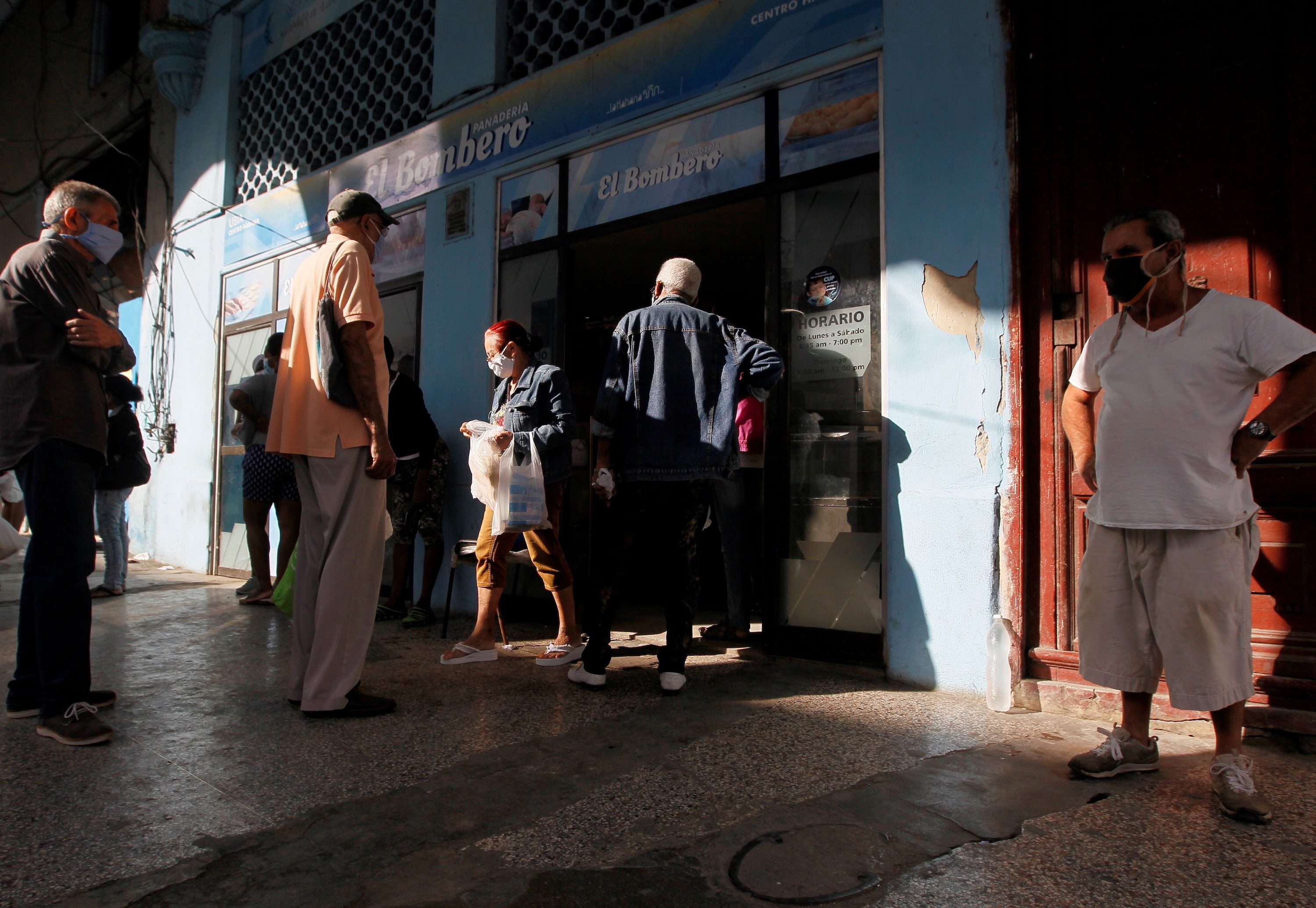 CUBAN ECONOMY. People stand in line outside a bakery in Havana, Cuba, January 20, 2021.

Facebook Twitter Copy URL
Copied
Communist-run Cuba is all but bankrupt. It failed in 2020 to pay restructured debt and is finding it difficult to obtain credit.

Cuba must devalue and deregulate further after taking initial steps this year to restructure its ailing state-run economy and presumably pay off long overdue debt, according to western creditors, business partners, and analysts.

Cuba devalued the peso this month from its decades-old official rate of par with the greenback to 24 pesos to the dollar. A dollar substitute called the convertible peso, fixed at the latter rate, was scrapped, as were various sectoral exchange rates between the two.

In addition, the government announced a gradual reduction in subsidies to state companies, utilities, and basic goods. In an effort to cushion the impact on the population, it imposed price controls combined with an average fivefold increase in state wages and pensions.

The changes were born of necessity. The Communist-run country is all but bankrupt. It failed last year to pay restructured debt and is finding it difficult to obtain credit.

Battered by the implosion of ally Venezuela, tighter US sanctions, and the coronavirus pandemic, the government says the measures could not be postponed. Cuba’s economy shrank by an estimated 11% last year versus 2019.

Six Cuba-based western diplomats and businessmen, whose governments and companies are owed money and who declined to be named, applauded the moves but said the government needed to go further.

A European diplomat, whose country is waiting for payment to the Paris Club of wealthy creditor nations, said the peso needed to be devalued to between 40 and 50 to the dollar, the current informal market rate. However, he feared authorities would balk at the possible political consequences.

“I think they are going to postpone further devaluation for a long while,” he said, pointing to popular complaints over higher utility and other prices in January that led the government to keep some subsidies destined for elimination and lower electricity and some other set prices.

Cuban authorities did not respond to a request for comment.

IMF not an option

While many capitalist countries facing a similar balance of payments and budget crisis might turn to the International Monetary Fund (IMF), US sanctions prohibit Cuba’s membership in the multilateral lender.

In return for budgetary financing, the IMF often advocates devaluation and cuts in subsidies to improve economic competitiveness. But without the wage increases, price controls and other policies simultaneously going into effect in Cuba to cushion the blow.

Cuba’s budget deficit is set to almost triple to 18% to 20% of the gross domestic product this year. The deficit is financed by state owned banks.

Moody’s rates the Cuban credit risk at Caa2, one of its highest.

Another diplomat and an investor said confusion and a half-baked approach in the rollout of the more than 1,000 pages of regulations was worrisome, giving as an example how company assets were valued.

“At first, they were insisting company assets, both state and joint venture, remain valued at the old 1-1 exchange rate,” the diplomat said, even though resolution 337 of the ministry of finance and prices establishing accounting rules for the devaluation excluded joint ventures from the rule.

“The problem appears to have been solved but it showed incompetence at certain levels of the politicized bureaucracy,” he said.

A European investor commented that the government said a major reason for the single exchange rate was to make state company accounts more transparent even as they were granted more autonomy.

“Apparently keeping the old rate is to tamp down inflation in the short term but it will result in assets being way undervalued to an equivalent of a few cents on the dollar compared with costs, income, and profits at the 24-peso rate, once more muddying the books,” he said.

Paul Hare, a former British ambassador to the island who lectures at Boston University’s Pardee School of Global Studies, said authorities must deregulate small business and foreign investment to foster growth and absorb labor, a view shared by many reform-minded Cuban economists.

“Will they open up key sectors such as agriculture, energy, or communications to foreign investment or allow small businesses to engage in manufacturing, exports and build more than mini enterprises?” he asked.

The Cuban government has said it intends to.

But the Cuba-based diplomats and businessmen were skeptical.

“They keep on repeating that this is their goal. But are they seriously doing it? Not so far,” one of the diplomats said. – Rappler.com