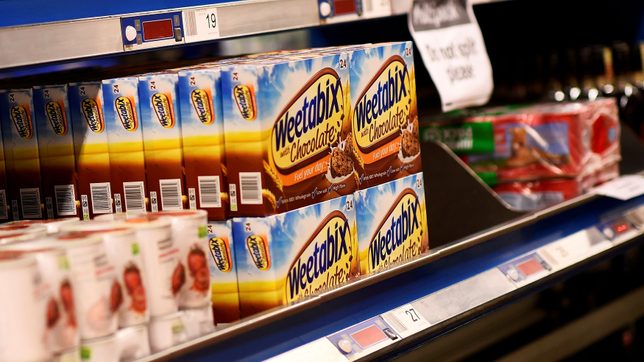 WEETABIX. Packets of Weetabix cereal and other food products are seen inside the Ocado Customer Fulfilment Centre in Hatfield on the outskirts of London, Britain, April 6, 2016.

Facebook Twitter Copy URL
Copied
Members of the Unite trade union are stepping up strike action at two Weetabix factories in Kettering and Corby, central England, in a dispute over pay and conditions

Britain, already reeling from a shortage of crisps, is now facing disruption to supplies of Weetabix, one of its most popular breakfast cereals, following the escalation of industrial action.

Members of the Unite trade union are stepping up strike action at two Weetabix factories in Kettering and Corby, central England, in a dispute over pay and conditions.

Around 80 engineers at the factories have been on strike every Tuesday and Wednesday since September. From Monday, November 8, strikes will take place every Monday, Tuesday, Wednesday, and Thursday, causing further disruption to Weetabix’s operations.

“We are working hard to minimize disruptions to our operations. We have a naturally resilient supply chain and have robust planning in place to help mitigate any shortages as a result of the strikes,” a spokesperson for Weetabix Food Company, which is owned by US cereal giant Post Holdings, said.

Britain’s supply chains are being strained by a post-Brexit shortage of truck drivers and the global supply hiccups caused by the COVID-19 pandemic, which is fueling inflation.

In August, McDonald’s pulled milkshakes and bottled drinks from its menu, and fellow fast-food chain Nando’s shut around 50 sites due to staffing shortages in its chicken supply chain.

Unite said its members are striking at Weetabix over cuts to their pay, terms and conditions that it says will cost some workers more than 5,000 pounds ($6,744) a year.

It said the changes amount to firing the workers and rehiring them under different terms.

The company disputes that.

“The current discussions with our team focus on a request for compensation for a change in shift patterns,” Stuart Branch, group people and IT director at Weetabix Food Company, said.

“As these changes are permitted under their existing contracts we will not be paying for them as it would be unfair to our other employees.”