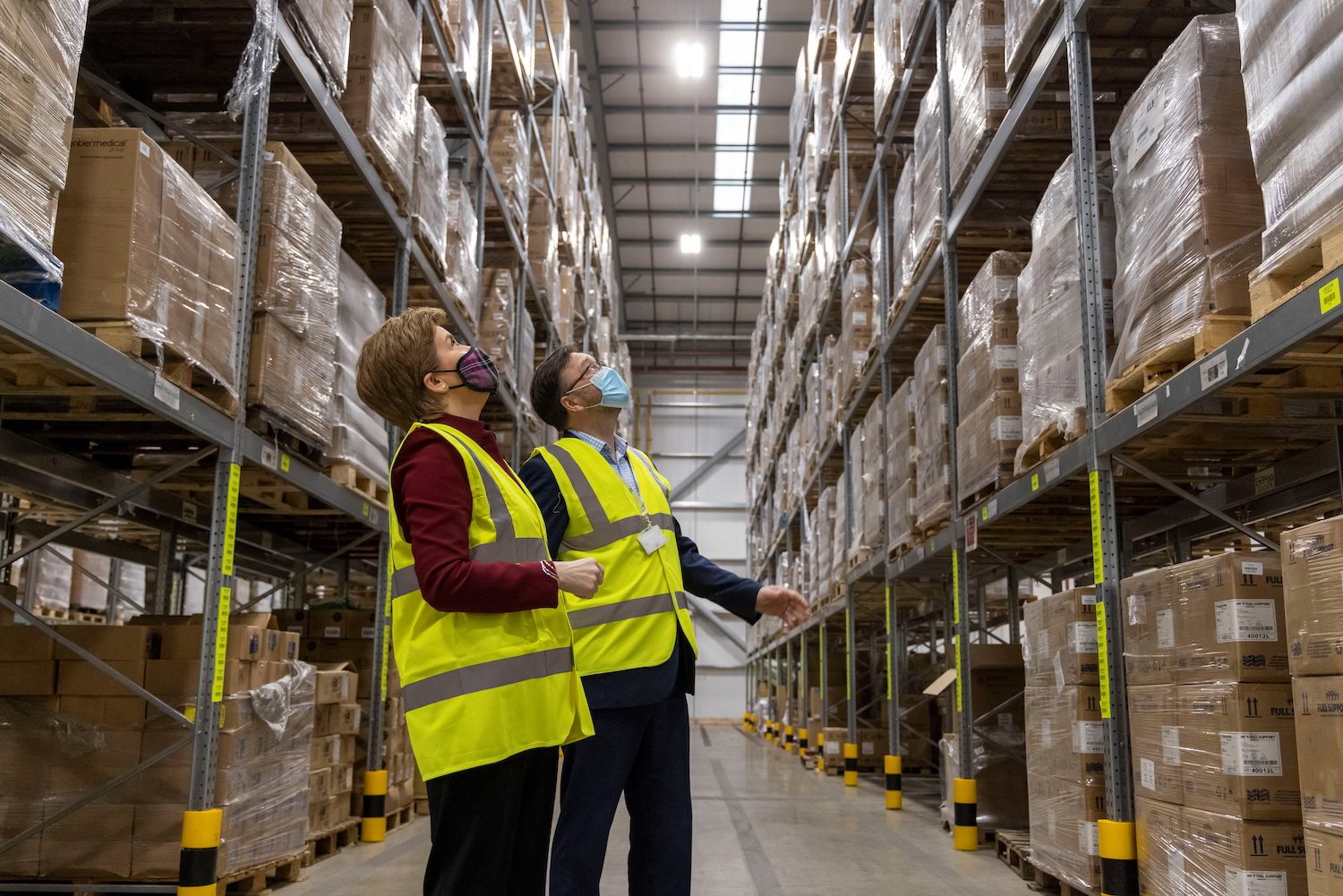 AID. Scottish First Minister Nicola Sturgeon looks up with Gordon Beattie, director of national procurement for NHS National Services Scotland, at the Titan logistics facility, where medical supplies are loaded to be sent to Ukraine, in Bellshill, Scotland, March 2, 2022.

Western drugmakers and medical device companies warn their plans to keep selling products to Russia may be complicated by economic sanctions targeting the country and its major banks in punishment over Moscow’s invasion of Ukraine.

Sanctions levied by the United States, Britain, Europe, and Canada against Russia do not apply to medicine and medical equipment, and the industry has a responsibility under international humanitarian law to continue supplying these products, industry trade groups, policy experts, and company officials said.

International aid groups are pushing to keep critical medicines flowing into Ukraine, where Russian troops are seeking to wrest control of major cities, prompting more than 870,000 Ukrainians to flee their country and millions to seek shelter from air strikes. Already, pharmacies are reporting shortages of medical supplies.

Many Western companies said they will stop selling everything from cars to movies in Russia. Transactions related to medicine and medical devices, as well as food, have been authorized despite US and EU sanctions.

But sanctions that have cut off Russian banks from the international financial system, as well as decisions by major shipping companies to suspend service to the country, could hinder the delivery of medical supplies as well.

The removal of seven Russian banks from the SWIFT international payments system – as well as the ongoing assault on Ukraine – could cause interruptions, MedTechEurope, the European lobby group for medical device companies, said. Without access to that payment system, it becomes more difficult to transact with Russia.

“The freezing of bank transfers could indeed have an impact on the export of medical devices from the EU to Russia, and we are actively looking into the extent of this and will see how the situation evolves,” the MedTechEurope spokesperson said.

The European Federation of Pharmaceutical Industries and Associations in a statement called for safe passage of medicines and vaccines to people in need in Ukraine, neighboring EU member states, and Russia.

The US drug industry group PhRMA said it supports the continued exemption from all sanctions of medicines and the materials needed to manufacture them.

Under international humanitarian law, everyone has a right to access essential medical services and supplies, including drugs and vaccines, Lawrence Gostin, a public health law expert at Georgetown University said.

“During times of conflict, this right of uninterrupted access to essential medical supplies has often been violated,” Gostin said. “Governments that impose sanctions are also supposed to make an exception for medical supplies. Yet sanctions often disrupt medical services and supply chains.”

The United States in a general license issued last week authorized transactions related to the export or re-exportation of medicine and medical devices with Russia. It has also issued carve-outs for energy-related payments and international organizations, among others.

The US Treasury Department declined to comment on the issue.

The EU supplied Russia with 6.5 billion euros ($7.23 billion) of pharmaceutical products in 2020, about 8.4% of the region’s total exports to Russia, according to Eurostat data. It sent about 1.6 billion euros of medical equipment to the country in the 12 months ended September 2021, according to MedTech Europe.

Top shipping group AP Moller-Maersk on Wednesday, March 2, warned that shipments to Russia, including medical supplies, risk being damaged or spoiled due to significant delays at ports and customs.

Drugmakers including Switzerland’s Novartis, Denmark’s Novo Nordisk and Lundbeck, Britain’s GlaxoSmithKline, and US-based Eli Lilly said they are working to ensure patients have continued access to their medicines.

Novo Nordisk, the world’s largest maker of diabetes medicines, said it would do “all we can to maintain supply in Ukraine and Russia” but it anticipates sanctions will make that more difficult. It has already had issues delivering medicine to Ukraine.

“The supply of medicines may be indirectly affected by sanctions in other areas, and we will do whatever we can to ensure the citizens of Russia receive their life-saving medication,” Novo Nordisk said in an emailed statement.

Lundbeck, which specializes in treatments for depression, said it will continue to serve patients who need medicine in Russia.

“As long as we can supply medicine to patients in Russia within the current sanctions, we will do so,” chief commercial officer Jacob Tolstrup said in a written comment. – Rappler.com