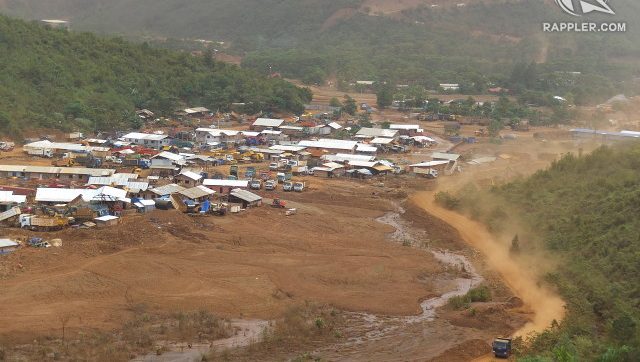 MINING. Trees in a critical watershed are cut to make way for a mining operation in Mindanao.

Facebook Twitter Copy URL
Copied
The Philippines could bring back open-pit mining despite environmental hazards, as the government struggles to look for cash to fund COVID-19 projects and revive the ailing economy

The Duterte administration is set to lift its ban on open-pit mining, a method deemed by environmentalists as the most destructive, as the government scrambles for cash to fund projects amid the COVID-19 crisis.

Talks to repeal the ban also come at a time when countries are discussing climate change issues at the 2021 United Nations Climate Change Conference or COP26.

“We need to because of the pandemic…. We need to take advantage of these mineral resources and ensure that we can move forward,” Environment Undersecretary Jonas Leones told One News’ BusinessWorld Live on Monday, November 1.

Leones said a technical working group has reviewed the proposal.

The late former environment secretary Gina Lopez banned open-pit mining in 2017 due to the environmental degradation it caused in areas where it was done.

Lopez’s predecessor Cimatu has supported the removal of the ban, upon recommendation of the Mining Industry Coordinating Council. But Duterte, on several occasions in the past, thumbed down moves to allow the resumption of open-pit mining operations. Should the Duterte government push through with repealing the ban, it would pave the way for several big-ticket projects to take off.

For instance, the $5.9-billion Tampakan copper-gold mine of Sagittarius Mines in South Cotabato, stalled since 2010, is among those that may get the go signal.

South Cotabato Governor Reynaldo Tamayo Jr. confirmed reports that he met with officials of the Department of Environment and Natural Resources regarding the matter, adding that he sees “no problem” with mining, as long as it is “done responsibly.”

“We want to see the angles of what they are planning to do in Tampakan,” Tamayo was quoted as saying in a Philippine News Agency report.

The mining site covers around 10,000 hectares and is estimated to produce 375,000 tons of copper and 360,000 ounces of gold concentrate annually. – Rappler.com