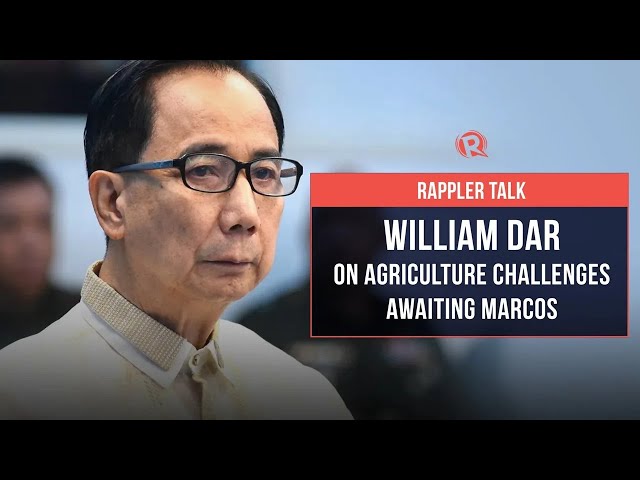 Dar’s Rappler Talk interview on Monday, June 27, comes days after Marcos announced he would helm the Department of Agriculture, at least temporarily. One of Marcos’ standout campaign promises was to lower price of rice to P20 per kilo though he did not explain in detail about his timeline for this goal or ways to achieve it amid forces driving up prices, including the Russia-Ukraine war.

Dar, who welcomed Marcos’ decision as a show of “political will” and a sign that the president-elect was taking food security seriously, said widening the coverage of irrigation systems is an urgently-needed solution and one that the government has failed to do presidency after presidency.

“If you want to have longterm sustainability for rice production, we need to fully develop the irrigation system good for 1.1 million hectares of rice lands. If you will just give construction to NIA (National Irrigation Administration), that will take more than 50 years to finish,” he said.

NIA has been a problem agency under the Duterte administration and was also flagged for performance under the Benigno Aquino III administration. For five straight years, the Commission on Audit had reported adverse findings – among them the “measly” performance in its mandate of increasing irrigation coverage throughout the country. More irrigated land can help boost rice production in the country, which, in turn, is one way to bring prices down.

But how to do this given the NIA’s lackluster track record? For most of Duterte’s term, the NIA was under the Office of the President. It was transferred back to the DA only in 2022, something Dar lobbied for.

Dar found that the NIA’s yearly capability is for construction of irrigation systems covering only 25,000 hectares of land. His solution? Give the job to the private sector.

“Our call in the [transition] report is for PPP (public-private partnership) in agriculture. Big infrastructure should be given to the private sector and the budget of NIA can be used to pay for the contracts of the private sector,” said Dar.

“In the next six years, if this is properly done, having the private sector do the construction, we can do it in six years,” he added, referring to the goal of irrigating 1.1 million more hectares of land.

This had been Dar’s plan in 2019 when he was appointed DA secretary. Back then, he wanted the PPP to be done via a build-operate-transfer scheme. But for most of his term, the NIA was under Malacañang.

Duterte had also appointed a retired military chief, Ricardo Visaya, to head the highly-technical NIA for most of his presidency. Could this explain the agency’s low performance?

“For me, the person to be appointed there should be an expert because the learning curve could take some time,” said Dar in Filipino.

Another irrigation solution Dar mentioned was building “secondary dams” or retrofitting existing big dams so that, during heavy rainfall when there is spillover of water, the excess can be used for irrigation.

Part of Dar’s recommendations to Marcos, his successor, would be to increase the ability of government to buy rice from Filipino farmers at high prices, to be sold to the public at low prices.

The National Food Authority (NFA), the agency that has the mandate to do this, currently has funds for purchasing rice good for a seven-day buffer stock. Through an executive order, said Dar, Marcos could authorize the steady increase of buffer stock to 30 days’ worth.

“This can help sustain, give farmers during harvest higher level of prices for their palay because prices of palay tend to drop during harvest time. Because of the low buffer stock being held by NFA, it does not have much influence in palay procurement,” said Dar.

Local governments of areas that are not producing rice or are not rice self-sufficient can also do their part by maintaining rice buffer stocks of their own and buying these from Filipino farmers, added the agriculture chief.

Other measures Dar cited in bringing down rice prices and helping farmers include a P15-billion fertilizer subsidy.

As his administration’s first DA secretary, Marcos, said Dar, could also ensure a much bigger budget for agriculture.

“Presently, the agriculture sector only gets 1.5% of the national budget in the country while other countries in ASEAN (Association of Southeast Asian Nations) is at 4% to 6%. So, tayo ay kulelat (we are last) in terms of budgetary support,” said Dar.

As for calls to repeal or amend the rice tariffication law, Dar said the law’s implementation will undergo a mid-term evaluation and the way forward would be clearer then when there is a closer examination of the measure’s impact on farmers and the economy. – Rappler.com