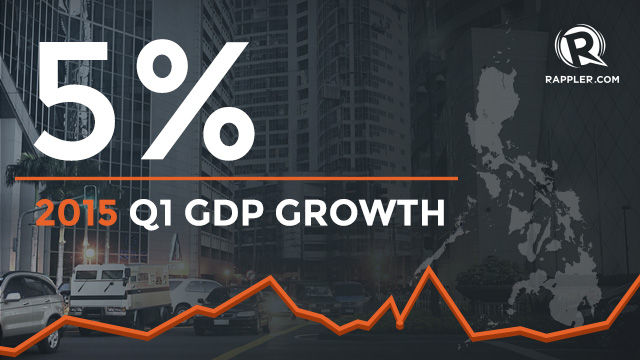 MANILA, Philippines – The Philippine economy’s first quarter economic growth was revised to 5% from the previous 5.2%, a day ahead of the announcement of the second quarter economic performance. The Philippine Statistics Authority (PSA) said Wednesday, August 26, that the downward revision was due to lower growth figures for public administration and defense; mining and quarrying; and agriculture, hunting, forestry, and fishing. The first quarter growth is lower than the 5.6% gross domestic product (GDP) rate in the same period last year, and down from 6.6% in the fourth quarter of 2014. It is the lowest since the 3.8% growth recorded in 2011.(READ: PH GDP growth slows to 3-year low: 5.2% in Q1 2015) It is also below the full-year government target of 7% to 8%. (READ: BSP: 7% to 8% PH growth target attainable) After a dismal first quarter, economists agreed that the GDP target for 2015 is unattainable. (READ: PH to miss 2015 GDP growth target – economists) 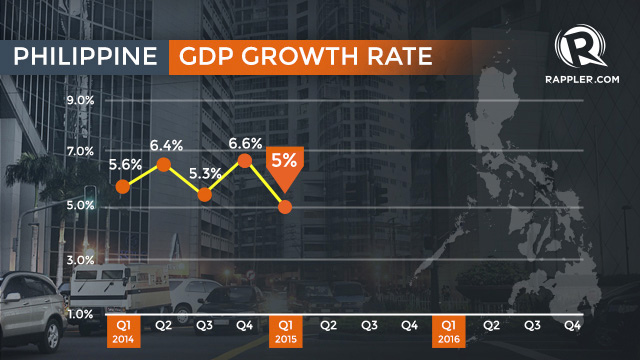 Magic number PSA revises the GDP estimates based on a revision policy approved by the former National Statistics Coordination Board – Executive Board, which is consistent with international standard practices on national accounts revisions. In relation to this, net primary income for the first quarter was also revised from 2.7% to 0.8%.   This contributed negative 0.35 percentage point to the downward revision of gross national iincome from 4.7% to 4.2%. Budget Secretary Florencio Abad said in a press conference Wednesday that the consensus figure for the second quarter GDP is 5.7%. Bank of the Philippine Islands’ ’s 2nd quarter GDP forecast is 5.8%, while Moody’s Corporation economics research division said in its latest report that the country’s GDP likely grew 6.8% in the second quarter of the year on the back of higher government spending. (READ: PH economic growth picking up despite slip in exports – Moody’s) Analysts said a GDP number over the general consensus of 5.7% will probably entice buyers back to the market, in light of the August 24 Black Monday Philippine stock plunge to 6.7%. But a number below 5.7% would elicit a graver response since GDP growth is probably one of the few things setting the country apart from its slowing regional peers. (READ: Worst may be over for PH stocks) “The improvements in public spending should offset the low numbers in exports, a problem that is externally affected because of weak demand abroad,” Abad said. Watch the live stream of the second quarter’s GDP announcement:
Broadcast live streaming video on Ustream – Rappler.com