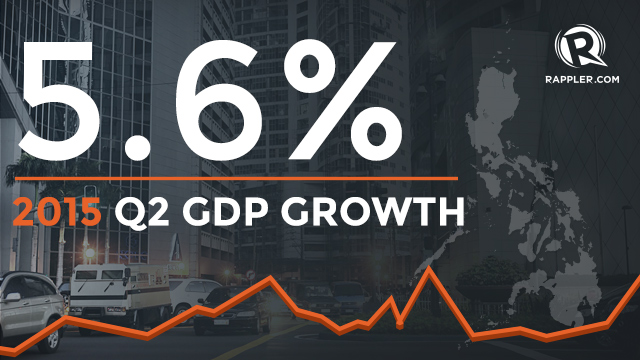 MANILA, Philippines (2ND UPDATE) – The Philippine economy grew 5.6% in the second quarter, fighting a regional slowdown with the help of strong performance of industry and services sectors and robust government spending.

Although the second quarter growth is higher than the first quarter gross domestic product (GDP) performance of 5%, it still lags behind the government’s and economists’ forecasts.

The general consensus was 5.7% – a “magic number” hoped to buoy the country’s growth for the rest of the year, following a dismal first quarter performance.

The previous quarter’s growth is also lower than the 6.7% reported in the same period last year. (READ: PH economy picks up steam in 2nd quarter)

The latest GDP figure also caused the Philippines to slip as the third highest among Asia’s major economies, behind China and Vietnam.

According to the Philippine Statistics Authority, the 5.6% growth was mainly driven by the services sector, which accelerated to 6.2% from 5.9%. The agriculture sector pulled down the GDP growth with -0.4%.

On the eve of the second quarter GDP growth announcement, the PSA revised downward the Philippine economy’s first quarter growth to 5% from the previous 5.2%. (READ: PH 1st quarter GDP lowered to 5%) 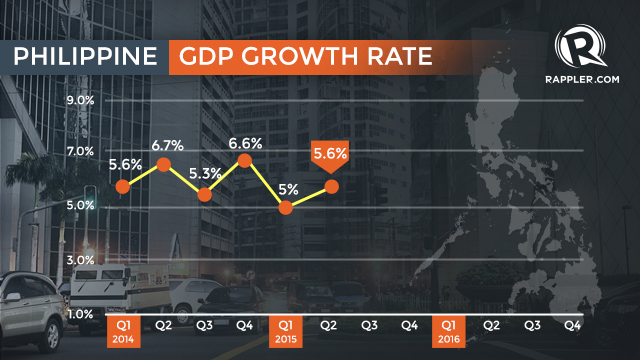 “Although slightly below the government’s target, it is important to ensure that the growth momentum is sustained,” said Balisacan, who is National Economic and Development Authority (NEDA) chief.

He said that the second quarter GDP growth “reflects significant improvement in government spending, especially in public construction” and  “indicates the sustained strong performance of the private sector.”

Balisacan added that the latest figures reflected the Philippines’ “resiliency from the prevailing weaknesses of the global economy.”

He said that although the first quarter growth figure is “lower than what the government and the market expected for the period … growth in the public and private sector remains robust as well as the services and industry sectors’ positive growths.”
The first-half GDP growth of 5.3% means the Philippines needs at least 8.7% in the second half to reach the government’s initial full-year target of 7%-8%. (READ: BSP: 7% to 8% PH growth target attainable)

“Even 7% is very hard. That’s why realistically we should probably be looking at 6% to 6.5% full-year GDP growth,” Balisacan said.

“We’ll meet soon with the economic managers to decide on the targets for the rest of the year. It’s very likely that we will scale down the target,” he added.

With growth averaging 5.3% in the first half, Balisacan said the economy growing by 6% to 6.5% by the end of the year is “very doable.”

Finance Secretary Cesar Purisima echoed the NEDA chief, saying that the 5.6% growth in the second quarter “proves our mettle as a resilient haven in these turbulent times.”

“Of 10 Asian economies, China’s economic slowdown will have the smallest impact on the Philippines. While trade with China has risen significantly in recent years, China’s share in our total trade with the world only accounts for 12%, reflecting a diversified trading position,” Purisima said.

He added that the country’s “externally induced” growth drivers such as remittances and business process outsourcing receipts “have minimal links with China’s economy.”

“In 2014 for example, remittances from China amounted to $31 million and accounted for only 0.1% of total remittances. Combined revenues from remittances and BPOs are projected to reach $47 billion this year, boding well for our growth prospects,” the finance chief said.

Purisima added that public spending is expected to play “a bigger role” in the performance of the Philippine economy in the second semester, citing “ample fiscal space in the P2.6 trillion 2015 budget to fund growth-inducing investments.”

Balisacan said on the sidelines of the briefing that China’s move to devalue the yuan may even benefit global growth should it lead to higher Chinese exports soon.

“Yuan depreciation isn’t that big. It isn’t harmful. It’s still beneficial for us because if you have a depreciation, imports become more expensive,” the NEDA chief told reporters.

“For industries that are producing goods as imports, that’s a plus for them. You don’t have to be an exporter to benefit from the depreciation,” he added.

“What’s harmful is when those changes are quite sharp and happen often that you can’t make good decisions,” Balisacan warned.

With the second quarter numbers in, Barclays said it cut its 2015 growth forecast for the Philippines to 5.5%, but said Balisacan’s expectation of 6% to 6.5% growth was “realistic.”

“Overall, despite the cut in our growth forecast, we expect the Philippines to continue to outperform the other ASEAN economies, with the country set to be the fastest growing economy among the major ASEAN economies for a third consecutive year in 2015,” Barclays regional economist Rahul Bajoria said in an email to Agence France-Presse. – with reports from Chrisee Dela Paz, Agence France-Presse / Rappler.com