Aug 28, 2015 6:14 PM PHT
Rappler.com
Facebook Twitter Copy URL
Copied
Among 36 government institutions rated for sincerity in fighting corruption, 21 get a thumbs up from business executives, according to the results of a Social Weather Stations poll 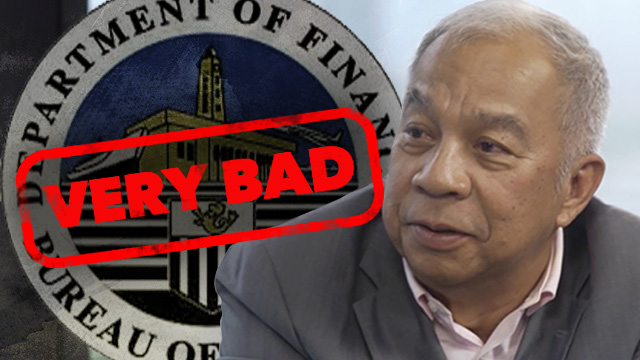 MANILA, Philippines – While businessmen’s perception of corruption in government has dipped to a “record low,” Filipino executives slapped the Bureau of Customs (BOC) with a “very bad” rating in its “sincerity” in fighting corruption, an independent poll revealed.

The results of the 2014/15 Social Weather Stations Survey of Enterprises on Corruption released Thursday, August 27, showed that 32% of executives surveyed said they have personal knowledge of a corrupt transaction with the government in their line of business in the past 3 months.

The survey also showed that 39% said most companies in their sector of business give bribes to win public sector contracts – again a record low from the previous lowest level of 41% in 2012 and 2013.

The survey was conducted from November 14, 2014, to May 12, 2015, among executives of 966 enterprises in the National Capital Region, Metro Angeles, Cavite-Laguna-Batangas, Metro Iloilo, Metro Cebu, Metro Davao, and Cagayan de Oro-Iligan. 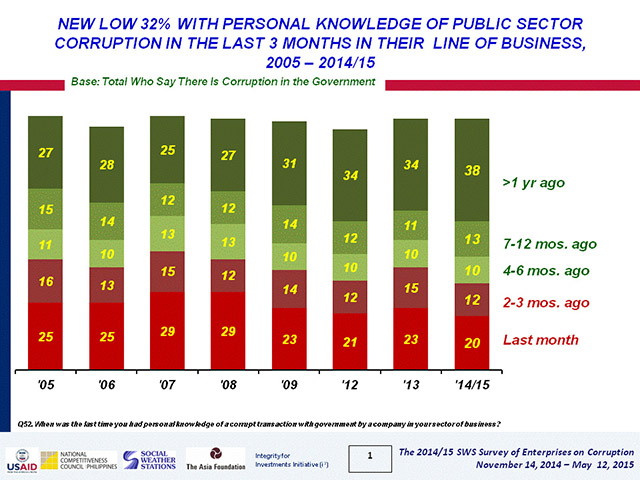 Although Filipino businessmen gave the BOC an improved sincerity rating of -55 from -63 in the last survey round, the rating is still categorized as “very bad.”

During the greater part of the survey period ending May 12, the Customs chief was John Sevilla, who resigned on April 23 and was replaced by Bert Lina a day later.

The other major revenue collection agency fared better, according to the survey. The Bureau of Internal Revenue improved to “neutral” (-4) from “poor” (-10).

Thumbs up for 21 gov’t agencies

The survey results also showed that of the 36 government institutions rated for sincerity in fighting corruption, 21 got favorable ratings, 9 neutral, and 6 unfavorable.

The Securities and Exchange Commission got the highest net sincerity rating in fighting corruption (+63); followed by the Social Security System (+57); Philippine Stock Exchange (+55); Office of the President (+54); and the Department of Trade and Industry (+51).

The following were rated “neutral”: Department of the Interior and Local Government (+9); trial courts (+6); Department of Environment and Natural Resources (+6); Armed Forces of the Philippines (+4); Department of Budget and Management (-7); Department of Transportation and Communication (-2); Senate (-2); BIR, (-4); and Commission on Elections (-6). 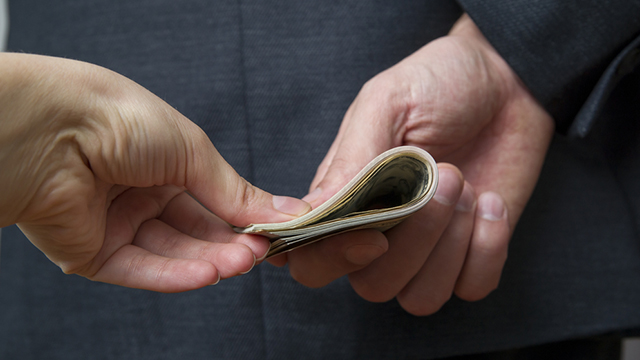 Another finding is that 23% of the respondents said most companies in their line of business give bribes to win private sector contracts. 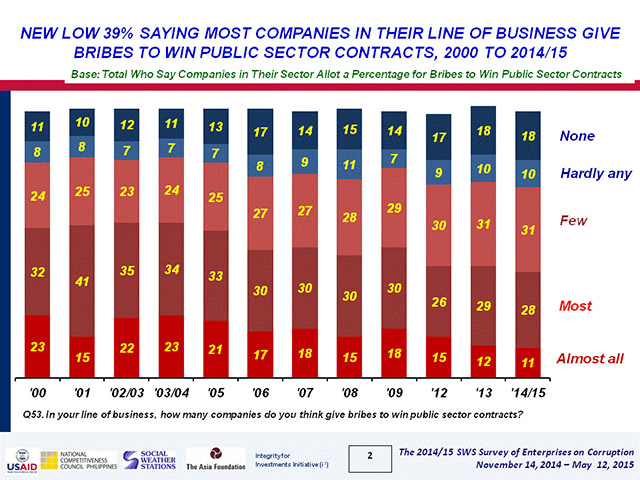 Fifty-seven percent said that corrupt executives in their own sector of business are often punished. 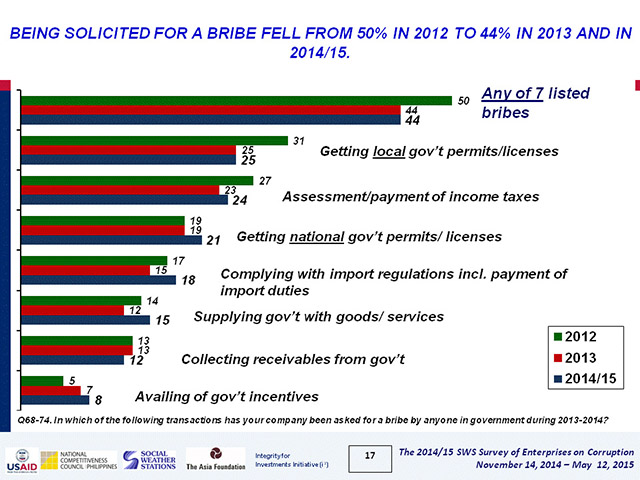 Nine in 10  or 90% agreed with the statement, “Corruption will be reduced by the passage of a strong law on the right of the people to information from the government.”

The survey also showed that a “new high” of 62% said “the government can be run without corruption,” while 78% disagreed that “to prosper in business in the Philippines today, one has to be corrupt.”

Among the other survey findings are the following:

Fifty-nine percent said the process of business permits/licenses renewal is easier now than 3 years ago, and the use of the Internet to transact with government has expanded. 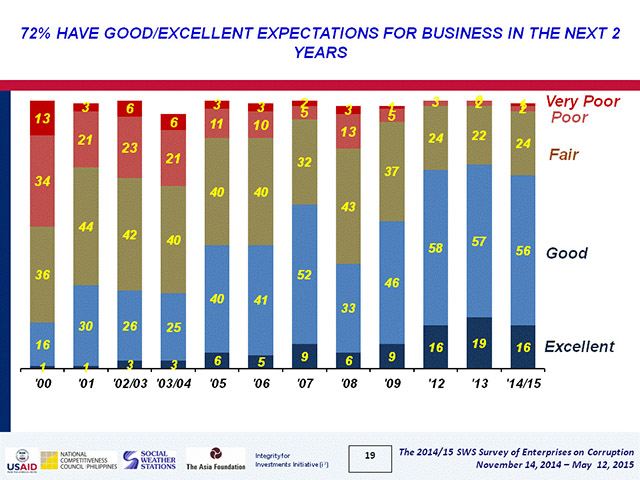 Sixty-four percent of the respondents are satisfied with the national government’s performance in promoting a good business climate – lower than the record high 70% in 2013.

Seventy-two percent have good/excellent expectations for business in the next two years – 4 points below the record-high 76% in 2013. This was at 55% in 2009.

Malacañang welcomed the survey results, which were presented by SWS, in cooperation with National Competitiveness Council, on Thursday, August 27.

Lacierda noted that under the Aquino administration, the Philippines has steadily climbed this index, from 134th place in 2010 to 85th in 2014.

“These figures reflect the reality of our government’s transformation in recent years: from one plagued by corruption and dishonesty to one that is committed to public service through Daang Matuwid (Straight Path),” he said. – Rappler.com