What business leaders want from the next PH president 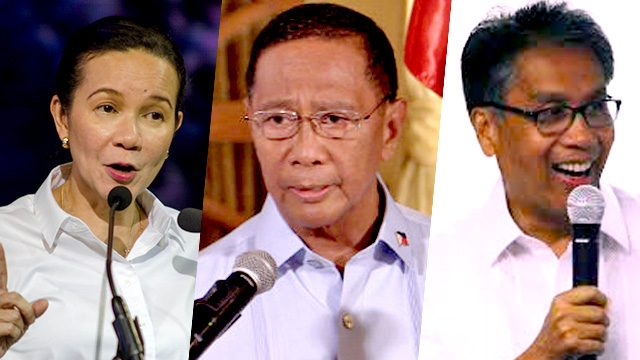 MANILA, Philippines – With contenders in the 2016 presidential elections formally throwing their hats in the ring, foreign business leaders have began to weigh in on what Filipinos should look for when electing the successor of President Benigno Aquino III.

Good governance, short- and long-term solutions to infrastructure woes, as well as sharply defined economic plan should be the key priorities of the next Philippine president, leaders of some of the country’s biggest foreign business chambers said on the sidelines of the 12th Joint Foreign Chamber Networking Night in Makati on Thursday, September 17.

“All the candidates are very well intentioned. I’m already here in the Philippines for 40 years. I wish Filipinos will vote someone who has a sharply defined economic plan that will promote inclusive growth,” European Chamber of Commerce in the Philippines (ECCP) president Michael Raeuber told Rappler.

Binay won over Roxas in the 2010 vice presidential elections. He was the early front runner in presidential preference polls but had steadily lost his edge due to corruption charges for acts allegedly committed when he was still Makati mayor. He is said to be eyeing Senator Ferdinand Marcos Jr as his running mate.

Roxas, who led the Department of Transportation and Communications and then the Department of the Interior and Local Government under Aquino, has formally asked Camarines Sur Third District Representative Leni Robredo to be his running mate.

“I wish Filipinos have a lot of choices; but what is improtant is the next leader’s priority should be inclusive growth,” Raeuber said. “The economy has grown, but it has not been fully inclusive.” (READ: Women are prime movers of inclusive growth – APEC leaders)

Although the Philippine economy has been growing at an average of 6.5% for the past 5 years, economists has said growth has not been fully inclusive.

Poverty incidence among Filipinos in the first semester of 2014 was estimated at 25.8%, according to the latest data of the Philippine Statistics Authority (PSA), higher than the 24.6% recorded in the same period in 2013.

“We have to somehow bring money to the rural areas. To do so, we need infrastructure. Today, all the rich are within Metro Manila, and a little bit in Cebu, Davao, other rural areas. We need to bring the sources of living to the far-flung rural areas,” Raeuber said.

Infrastructure underspending is one of the reaons for the lower-than-expected  Philippine economic growth in the first quarter of the year.

In the second quarter, however, infrastructure spending accelerated due to higher fund use of the Department of Public Works and Highways (DPWH).

Other than increasing spending on infrastructure, Raeuber said the next Philippine president should have a plan on diversifying the economic drivers of the country.

“The Philippines is so highly dependent on export of labor and the BPO industry. But that is only a part. And then what else do we have? A bit of electronics export. What else? It’s time to grow other sectors. For instance, there is an opportunity in responsible, controlled mining. It is untapped,” Raeuber said.

John Forbes, senior adviser of the American Chamber of Commerce in the Philippines, echoed Raeuber’s remarks. He said the Filipinos should support someone who has a policy program that will “bring total investment to 30% of GDP with a more open, more competitive economy.”

The next administration should not only remove foreign ownership restrictions in the Constitution, but all other barriers to entry not requiring constitutional change, Forbes said.

Meanwhile, Japanese Chamber of Commerce and Industry Philippines president Yoshio Amano told Rappler that “good governance and no corruption will revive and attract more foreign investments in the country.”

“Clean governance is the first step. Erase corruption and then go ahead with infrastructure development and foreign investments support,” Amano said.

“It is indeed more fun in the Philippines, if there is no corruption, there is good infrastructure and supportive government,” he added. – Rappler.com