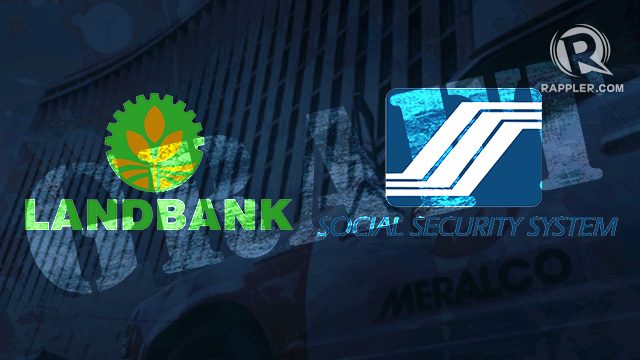 MANILA, Philippines – Key officials from the Land Bank of the Philippines (LBP) and Social Security System (SSS) face graft complaints before the Ombudsman in connection with the block sale of Manila Electric Company (Meralco) shares of stock to a company identified with controversial businessman Roberto “Bobby” V. Ongpin.

The alleged anomalous deal involved the block sale of SSS’ Meralco shares to Global 5000 Investment Inc for P5.669 billion/P90 a piece ($121.22 million/$1.92 per share) under the Arroyo regime, the Office of the Ombudsman said Thursday, September 24.

The Commission on Audit (COA) earlier slammed SSS for selling its Meralco shares to the company that was formed in 2008 by Ongpin, Iñigo Zobel, and Jose Campos – all businessmen identified with the late dictator Ferdinand Marcos.

The 3 are also facing the same Ombudsman probe.

Facing investigation for violation of sections 3(e) and 3(g) of Republic Act No. 3019 or the Anti-Graft and Corrupt Practices Act are the following former SSS officials:

Also facing investigation (based on a separate complaint filed by the Field Investigation Office of the Ombudsman) are LBP executives, namely:

Pico, Vergara, and Halog were also slapped with administrative charges for grave misconduct and conduct prejudicial to the best interest of the service.

The next step is for the Ombudsman to determine if the complaints have enough leg to be filed with the anti-graft court Sandiganbayan.

The Field Investigation Office (FIO) of the Ombudsman said that in January 2009, Cunanan and other SSS officials approved the block sale of its Meralco shares.

The deal involved the purchase of the state-run firms’ shares in Meralco by units of SMC and Ongpin-led firms. At the time, Meralco was controlled by the Lopez family and the target of a brewing battle for control by major business groups, including that of businessman Manuel V. Pangilinan. The deal that pushed through involved a P90-per-share valuation payable over 3 years. Pangilinan’s group offered to pay the same in cash.

The sweetheart deal was approved by SSS officials despite Global 5000’s lack of proven record considering it was only established one year prior to the sale, the FIO said.

Documents also revealed that SSS executives waived their voting rights to Global 5000 despite the lack of full payment and actual transfer of ownership.

COA earlier said the deal was “not in accordance with sound business practice as it has the effect of giving P4.535 billion ($96.94 million) loan to Global 5000 which had an initial paid-up capital of only P62.5 million ($1.33 million). (READ: San Miguel boosts Meralco stake in deal with SSS)

An ongoing investigation is being conducted versus LBP executives for approving P4.193 billion ($89.50 million) block sale of its Meralco shares in favor of Global 5000.

The FIO said in its complaint that LBP executives gave unwarranted benefits, advantage or preference to Global, “a firm with doubtful financial capacity and no track record to undertake the sale.”

LBP executives entered into a stock purchase agreement, which was undertaken in a matter of 10 days, without any negotiations, FIO probers added.

Both SSS and LBP previously defended the Meralco block sale.

LBP said in September 2012 that it practiced due diligence and transparency in the transaction. “The shares, if sold at P90 ($1.92), in December 2008, when the prevailing market price was P57 ($1.22) per share, would have represented a hefty premium of 58% over market price, if it pushed through.”

It also denied that the deal would have put the government at a disadvantage for “exposing the government to risks of more than P4 billion ($89.40 million).” (READ: No controversial Meralco share sale – Landbank)

SSS also earlier defended the agreement, saying it named state-owned Development Bank of the Philippines (DBP) as secondary buyer of the shares. It further said the parties agreed on a forfeiture clause, wherein all payments made by and dividends credited to the buyer would be forfeited in favor of SSS if both SMC Global Power and DBP failed to pay for the transaction. (READ: San Miguel boosts Meralco stake in deal with SSS)

The Meralco share sale is one of the “questionable” transactions that the Senate committee on banks, financial institutions and currencies investigated.