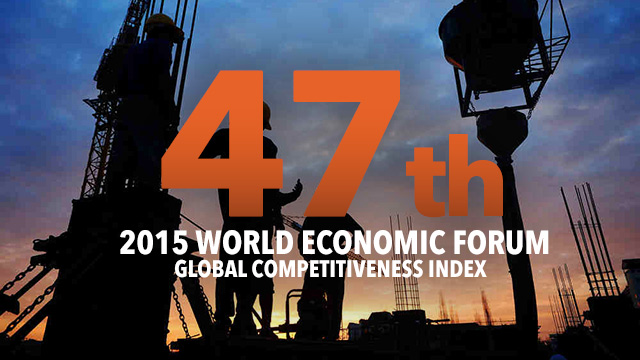 Based on the report released Wednesday, September 30, the country, together with 4
other Association of Southeast Asian Nations (ASEAN) members, namely Malaysia (18th, up two); Thailand (32nd, down one); Indonesia (37th, down 4), and Vietnam (56th, up 12) – all rank in the top half of the overall GCI rankings.

Singapore ranked 2nd place in the overall index, and cited as the most competitive Southeast Asian economy.

“With the exception of Thailand, all 5 have improved their showing since 2007, most notably the Philippines, which has leapfrogged 17 places,” the report noted.

The GCI was introduced by WEF in 2004, and it defines “competitiveness” as the set of institutions, policies, and factors that determine the level of productivity of a country.”

GCI scores are calculated by drawing together country-level data covering 12 categories – the pillars of competitiveness – that collectively make up a comprehensive picture of a country’s competitiveness.

The 12 pillars and the Philippines’ corresponding rank (out of 140 countries) and score (from a scale of 1 to 7) are:

The Makati Business Club (MBC) noted that the country moved up in 10 out of 12 pillars in the index from last year, with the largest improvements seen in labor market efficiency (up by 9 places to 82nd); health and primary education (up 6 places to 86th); and market size (up 5 places to 68th).

Noteworthy to mention also is that since 2010, the strongest performing pillars for the Philippines are in innovation (up 63 places to 48th); institutions (up 48 places to 77th), and macroeconomic environment (up 44 places to 24th) – “pillars that lay the ground for long-term, sustainable growth,” MBC noted.

In a statement on Wednesday, Presidential Spokesperson Edwin Lacierda said that despite global uncertainties, the country continnues to go from strength to strength, notable in its latest ranking in the WEF-GCI report.

“Our current rank of 47 – compared to last year’s 52 – further cements our reputation as a bright spot in Asia, an attractive destination for foreign investment, and a better place to do business for Filipinos,” he said.

Lacierda also pointed out that comparing the 2010-2011 and 2015-2016 reports, improvements have been noted in all 12 pillars, most notably in innovation, institutions, and macroeconomic environment.

Surveys such as this have proven it time and again: reform works, good governance works, Lacierda said.

The changes implemented under the Aquino administration have contributed toward increased transparency and efficiency, bolstering public trust and creating a more enabling environment for business, the presidential spokesperson added.

“The effects are palpable, not only at a macroeconomic level but also in our citizens’ everyday lives, with continuous improvements in the delivery of social services,” Lacierda said.

He added that as the country gears for the 2016 elections, developments such as these “continue to demonstrate the benefits of treading the straight and righteous path.”

Finance Secretary Cesar V. Purisima said in a statement on Thursday, October 1, that the improved ranking is a direct result of the unrelenting drive for good governance the Aquino administration has started back in 2010.

“I think the numbers themselves speak volumes: good governance is indeed great economics. If you look at the Philippines’ performance in the World Bank’s Worldwide Governance Indicators (WGI), we have improved leaps and bounds across all indicators,” he said.

The World Bank’s Worldwide Governance Indicators (WGI), released on September 25, showed the Philippines improving on all 6 of its dimensions since 2010. The WGI report covers 6 aggregate governance indicators for over 200 countries and territories over the period 1996-present, assessing:

Purisima said that comparing this year’s results to a base year of 2011, the country leaped 18 places for both political stability and control of corruption. The Philippines climbed 9, 7, 6, and 5 notches for rule of law, regulatory quality, government effectiveness, and voice and accountability, respectively, he added.

“Things going well tells us that we are doing right by our people, and that we must continue to do so. We have come a long way: the gap from where we were to where we are is the strongest encouragement we have to persevere on to where we want to go,” Purisima said.

The Makati Business Club (MBC) also welcomed the results of the 2015-2016 WEF-GCI report, and noted that the Philippines has come much closer to its goal of being in the top third of the global rankings.

“Congratulations are in order for all government agencies that have tangibly contributed to this milestone,” MBC said in a statement released September 30. (READ: BSP best performer in gov’t; OVP worst – MBC poll)

MBC noted that the country placed 5th out of 9 included Southeast Asian countries in the survey, especiallh highlighting that while Vietnam ranks 68th overall and 6th in ASEAN, it is steadily gaining on the ASEAN-5, garnering the highest jump among Southeast Asian countries with a 12-place improvement. Meanwhile, the Philippines ranks 16th out of the 19 covered APEC (Asia-Pacific Economic Cooperation) economies.

“These should provide the impetus to rapidly enact the needed reforms to sustain our momentum,” MBC said. 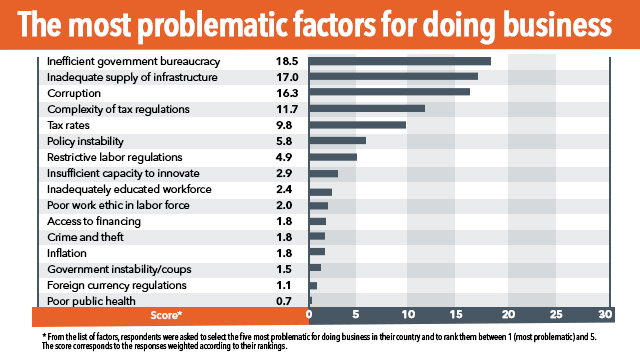 While it is notable that the country is improving, the annual WEF-GCI report cited the “most problematic factors in doing business” in the Philippines.

Topmost among them is inefficient government bureaucracy which scored 18.5; followed by inadequate supply of infrastructure with 17 as score; and corruption with a score of 16.3.

MBC said such top 3 “most problematic” factors for doing business in the country are among the priority areas of focus by the Philippine Business Groups and Joint Foreign Chambers (PBG-JFC) in the letter sent to President Benigno Aquino III in May.

These are supported by poor performances in the burden of government regulation (down 28 places to 101st); efficiency of legal framework in challenging regulations (down 24 places to 80th); quality of overall infrastructure (down 11 to 106th); and prevalence of diversion of public funds (down 22 to 100th), among others.

“In terms of information technology infrastructure, dropping in ranks were availability of latest technologies (down 20 to 78th) and international Internet bandwidth (down 30 to 76th).”

As possible solutions to the concerns, MBC said the PBG-JFC recommended the:

“MBC shares the PBG-JFC’s position that the implementation of these and other key measures will result in improved national competitiveness,” it said.

Overall, MBC (a partner institute of WEF in the Philippines since 1994).said the achievements of the last 5 years are certainly worth celebrating.

“Nevertheless, as the Philippines continues to improve, other economies are likewise moving and are either rapidly catching up or overtaking the country. Moving forward, especially toward a change in administration, MBC, through the PBGs and JFCs, commit to support all efforts aimed at further improving the country’s competitiveness,” MBC said.

First place in the GCI rankings, for the 7th consecutive year, goes to Switzerland, showing strong performance in all 12 pillars of the index, making it remarkably resilient throughout the the crisis and subsequent shocks, WEF said.

Singapore remains in 2nd place and the United States 3rd.

Germany improved by one place to 4th and the Netherlands returned to the 5th place it held 3 years ago. Japan (6th) and Hong Kong SAR (7th) followed and are both stable, WEF noted.

Finland fell to 8th place – its lowest position ever – followed by Sweden (9th).

The United Kingdom rounds up the top 10 of the most competitive economies in the world.

The 4th “industrial revolution” is facilitating the rise of completely new industries and economic models and the rapid decline of others, said Klaus Schwab, founder and executive chairman of WEF.

“To remain competitive in this new economic landscape will require greater emphasis than ever before on key drivers of productivity, such as talent and innovation,” Scwab said.

Xavier Sala-i-Martin, professor of Economics at Columbia University added that the new normal of slow productivity growth poses a grave threat to the global economy and seriously affects the world’s ability to tackle key challenges such as unemployment and income inequality.

“The best way to address this is for leaders to prioritize reform and investment in areas such as innovation and labor markets; this will free up entrepreneurial talent and allow human capital to flourish,” Sala-i-Martin said. – Rappler.com