#AskTheTaxWhiz: How can we make Aquino listen to our tax woes? I’m an ordinary employee receiving a little above minimum wage subject to the onerous withholding tax. Like what you wrote in your previous article, “Why push for tax reform?” I’m one of the 13 million employees who never had a choice but to contribute to the P232 billion ($4.98 billion) taxes withheld from our monthly salaries in 2014.

We are overtaxed but underserved. It may not be as significant as the taxes paid by the top taxpayers, but our income is not even enough to sustain a decent living without borrowing money or skipping meals to make ends meet.

Is there still hope for us employees? What can we do to make our unheard voices be heard as “Bosses” of PNoy (President Benigno Aquino III) who obviously and stubbornly dumped the proposed tax reform on lowering income tax rates?

Can we still trust the “Daang Matuwid” (Straight Path) after this tragic incident? Will you vote for the candidates being endorsed by PNoy? You have been advocating for paying the right taxes but can we really trust the government despite the unending and unresolved graft and corruption cases from the Marcos to the Aquino Administration?

How come other companies are paying less taxes? Is there really a way to avoid taxes? Or are we all awaiting death by taxes? I know small entrepreneurs who are always assessed and penalized by the Bureau of Internal revenue (BIR). What are the common violations and penalties incurred by ignorant taxpayers like me?

I agree with what you said, “If only more taxes means less traffic or better public transport system, it would have been easy for any taxpayer to pay taxes!”

Thank you for your tax questions.

Together with all the tax experts and advocates in the country, we mourn the death of the tax reforms in Congress and in this administration. But there’s still hope! On October 15, you can join our #BLACKPAYDAY protest by wearing black and/or changing your profile photo to black to support #TAXREFORMNOW in lowering income tax rates: 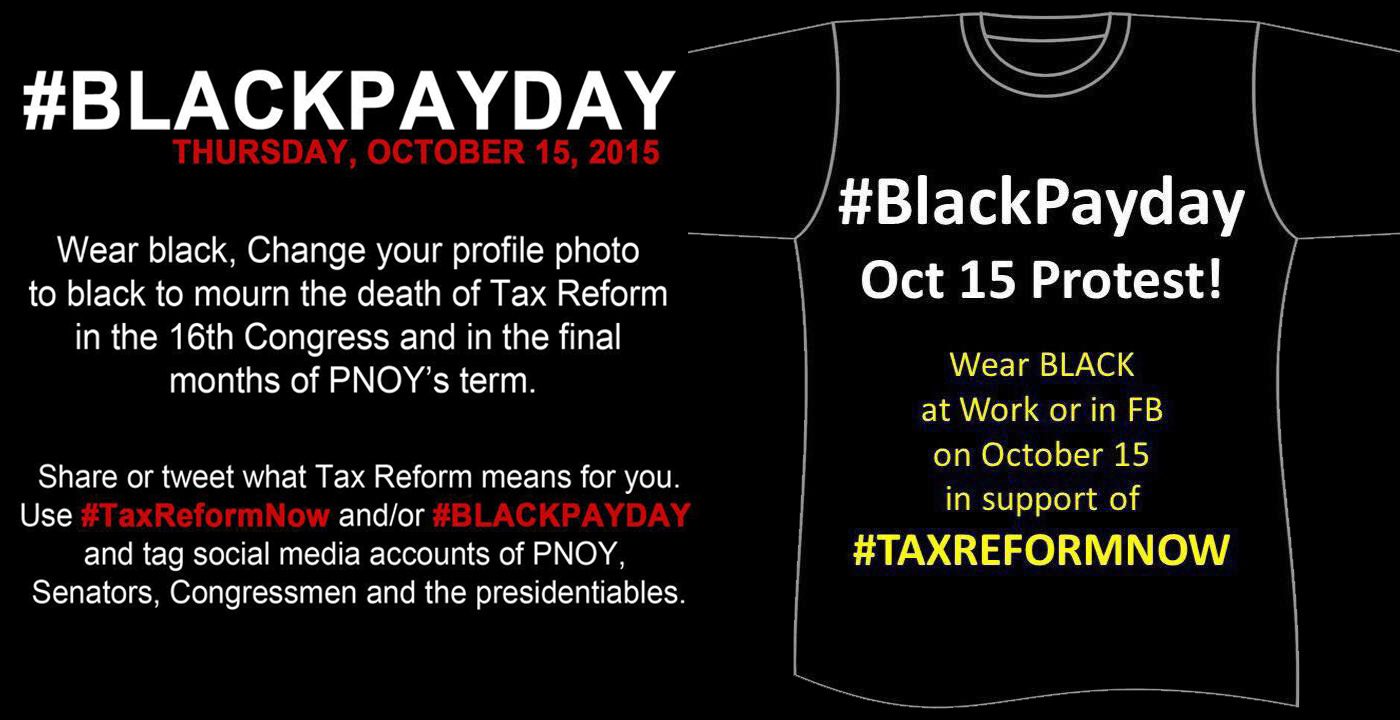 Unfortunately, the “Daang Matuwid” became too costly for most micro, small, and medium enterprises (MSMEs) but this is not entirely the government’s fault.

The mandate of the BIR is to assess and to collect taxes. Taxpayers have the responsibility to know the taxes and how to comply correctly. Although BIR could have been more customer-centric by making the tax compliance a lot easier and simpler to isolate the evaders from the ignorant and confused taxpayers like you.

Now more than ever, we have more power to influence the kind of government we want in the next 6 years by electing the right leaders.

Choosing the “Daang Matuwid” should not be a blind faith deal. We need to carefully scrutinize the background and platforms of each of their candidate. The values, principles, and advocacies of the candidates we will elect must be aligned with ours at the very least.

But let’s give where the credit is due. Many sectors have worked hard to institutionalize good governance both in private and public sectors.

In particular, the Institute for Solidarity in Asia (ISA) and Institute of Corporate Directors (ICD)’s Islands of Good Governance looks at milestone achievements in the use of the Performance Governance System (PGS), a locally developed governance reform program that draws on global best practices.

Several national government agencies, government-owned and controlled corporations, and local government units are now working toward this recognition. Each of these institutions has pledged to deliver breakthrough results, verified through audit, to show the impact of their transformation initiatives not only in their organizations but also on the communities they serve. The first “Island of Good Governance” will be named at the October 21-22, 2015 Public Governance Forum in Manila, where they will be presenting their transformation stories before an international audience.

In fairness, the Aquino administration inherited a lot of problems but they accomplished a lot. They may have missed some opportunities to institutionalize reforms including in the tax administration but we need to do our share.

For the last 4 to 5 years, we have been advocating for a genuine tax reform. We made several proposals and attempt to work with the government to promote a culture of honesty in paying taxes. But they seem to have other priorities.

I will not influence you with my votes but once I have a final list of trustworthy leaders from president to legislators, I will share it. But definitely, no block voting for me as I will put more weight on candidates’ position on pushing for a genuine tax reform. It should not be a motherhood statement but a strategic and effective policy to initiate overhauling of our tax system.

Tax avoidance is the use of right knowledge and tax strategy to legally save from paying unnecessary taxes, penalties, and compromises while tax evasion is the willful attempt not to declare and not to pay taxes.

If you can travel to Davao on Saturday, October 17, at the Grand Regal Hotel, we will be bringing the biggest and most anticipated gathering of the country’s tax experts – Tax Avoidance Congress 2015.

Learn how to enjoy a tax-free lifestyle – a lifestyle not free from taxes but free from the unnecessary burden of penalties and compromises. For inquiries, email to hello@spcg.ph or contact to (082) 285-2189.

Ignorance is our biggest problem. To avoid taxes is easy if we understand it. But it will be too risky if we second guess or simply Google our tax strategy. From our end, we published the tax handbook, “Got A Question About Taxes? Ask the Tax Whiz!” to simplify and “laymanize” the tax code and make it more appealing to the taxpaying public.

Regarding the violations and penalties incurred by taxpayers, here is a list: Thank you and enjoy a tax-free lifestyle!

Mon Abrea is a former BIR examiner and an advocate of genuine tax reform. He serves as chief strategy officer of the country’s first social consulting enterprise, the Abrea Consulting Group, which offers strategic finance and tax advisory services to businesses and professionals. Mon’s tax handbook,Got a Question About Taxes? Ask the Tax Whiz! is now available in bookstores nationwide. Follow Mon on Twitter: @askthetaxwhiz or visit his group’s Facebook page. You may also email him at consult@acg.ph.