PH drops to No. 103 in World Bank Doing Business report Facebook Twitter Copy URL
Copied
The fall is due to a drop in a number of indicators and the increasing competitiveness of other countries, but the results are disputed by the National Competitiveness Council

MANILA, Philippines – The Philippines has slipped to 103rd place among 189 economies in the latest edition of the World Bank-International Finance Corporation (IFC) Doing Business Report released on Wednesday, October 28.

The Philippines was at 95th place in last year’s report, but after adjusting for data revisions and the changes in methodology, the World Bank ranked the Philippines 97th in 2015.

The fall in ranking is reflected in a drop in a number of indicators: 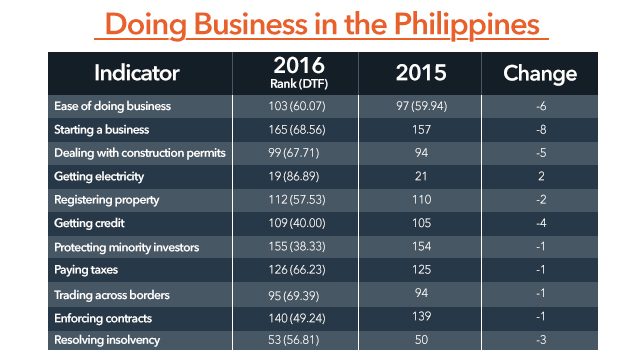 Despite this, the Philippines experienced a slight improvement in the Distance to Frontier (DTF) baseline, which rose to 60.07 from 59.94 last year.

DTF represents the best performance observed in each of the indicators across all economies in the report since 2005. It is graded on a scale of 0-100, with a higher number indicating improvement.

The Doing Business Report aims to show how easy or difficult it is for a local entrepreneur to open and run small to medium enterprises (SMEs) when complying with relevant regulations.

The report, however, does not measure all aspects of the business environment including macroeconomic stability, proximity to markets and regulations specific to foreign investment or financial markets, stressed Roberto Galang, operations officer at IFC.

World Bank Country Director for the Philippines Motoo Konishi also noted that despite the drop, the Philippines “is increasingly characterized by  strong economic growth, low inflation, healthy current account surplus, more than adequate international reserves and a sustainable fiscal position – a combination never before seen in its history.”

The latest survey also shifted the country’s position in ASEAN, dropping it one place to 6th behind Singapore, Malaysia, Thailand, Brunei, and Vietnam.

Malaysia, Vietnam, and Thailand also experienced a drop in rankings.

Indonesia, Cambodia, Laos all improved, while Brunei experienced the the biggest rise in the region, allowing it to leapfrog the Philippines. Galang pointed out that slight improvements can go a long way as it would only take an increase of 7 DTF points to get into the top third of countries.

He said one area that can be improved is tax collection. The country’s low score is due to the required 36 payments a year, costing SMEs 193 hours of work, Galang said.

This is because agencies like the Bureau of Internal Revenue (BIR) require monthly payments.

“Without reducing any taxes, we could make life easier for SMEs by simply asking for annual payment for VAT or for Philhealth,” Galang said.

Cutting down on procedures by combining them would help the Philippines become among the top performers in this indicator, Galang said.

Losing relevance as a diagnostic tool

This was disputed by National Competitiveness (NCC) Council Chairman Guillermo Luz who pointed out that the report failed to accurately reflect some of the on-going changes due to reforms in business regulations announced earlier this year. (READ: Start a business in 8 days and 6 steps, gov’t promises)

He said the report puts it at 16 steps and 29 days – an improvement of 5 days over the 2015 report – yet it does not show any change in the number of steps.

“In order to cut down on the amount of days, you will definitely need to eliminate some steps, yet the World Bank doesn’t recognize a change in that area,” he said.

This was part of Luz’s larger argument that the constant changing of methodology used in the Doing Business Report is comprising its credibility. (READ: New methodology in WB ‘Doing Business’ report draws flak)

“What get’s me about the report is this: Every year they make a change and apply it retroactively,” he said.

Luz continued: “You can’t change the rules later in the game, it doesn’t make sense. You’re losing the reference point that tells you whether you’re getting better or getting worse.”

This is why on the NCC website, the numbers shown are the original ones and not those that have been modified with new metrics.

For instance, NCC’s put the country’s ranking at 95 instead of the World Bank’s adjusted ranking of 97.

“We put up the original numbers to accurately reflect the changes on the ground from the previous year,” he explained.

Luz compared this to the World Economic Forum (WEF) Global Competitiveness Index which has seen less than 5 changes over 20 years. Every time the WEF makes a change, it also notifies the countries a year in advance to allow for adjustment, he added.

“They’re shooting themselves in the foot because the report loses credibility as a result because the numbers and the rankings keep changing,” he said, adding that even countries on the top, such as Malaysia, are complaining.

Luz added that “it’s a serious problem because while they may be just changing measurements, we are in fact instituting reforms in order to improve based on these metric which takes a lot of effort and time.”

“We have a lot to fix, and we will continue to do so, but how do we measure what to fix? This tool is starting to become unreliable and maybe we need a different tool,” he said. – Rappler.com