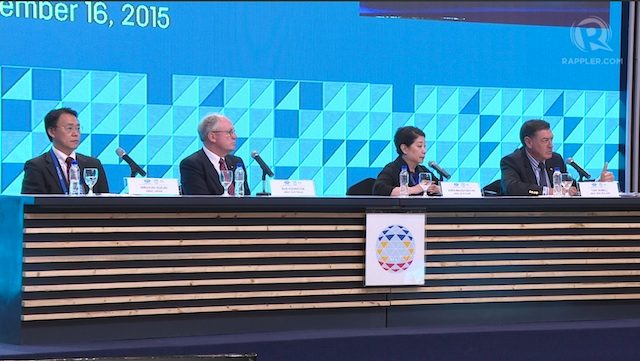 MANILA, Philippines – The Asia-Pacific Economic Cooperation Business Advisory Council (ABAC) will write leaders of Trans-Pacific Partnership (TPP) member countries to urge them to work on the ratification of the trade agreement by their respective legislatures.

The ABAC, led by 2015 chairperson Doris Magsaysay Ho, said in a news briefing that the TPP ratification would help pave the way for the Free Trade Agreement of the Asia Pacific (FTAAP), that covers APEC economies not part of the TPP.

In its 2015 report to APEC leaders, the ABAC cited the “enormous impact” of the TPP, the Regional Comprehensive Economic Partnership, and the Pacific Alliance “on regional growth and integration.”

“All are important for business in the region and as pathways towards FTAAP,” the ABAC said in its report presented to the media on Monday, November 16.

Rod Eddington of ABAC Australia said this is the reason why ABAC will write leaders of TPP member countries, who have concluded the agreement. The next step is ratification.

“One of the reasons the ABAC group had drafted and will write to all the leaders in TPP,  in fact all leaders of APEC, is for them to move as quickly as they can for ratification of TPP. The reality of these sorts of agreement is that until the TPP is ratified and comes into force, governments won’t turn their attention to FTAAP,” he said.

If realized, the FTAAP – seen as a potential rival to the TPP – would become the world’s largest free trade area, encompassing TPP and other regional frameworks.

Eddington said that the TPP is ratified, “we don’t think we’ll make real headway in FTAAP, and FTAAP is the big prize not only for APEC but particularly for members in APEC that promote free trade but  are not part of TPP.”

When asked, Tony Nowell of ABAC New Zealand clarified that the group is not specifically pushing for the TPP among other free trade agreements in the Asia-Pacific. He said that ABAC will congratulate the leaders of TPP members for concluding the agreement, “referencing the  importance of TPP as a building block towards FTAAP which is our ultimate agenda.”

“ABAC is not specifically pushing for TPP. TPP is one of a number of building blocks that we believe are important to achieve a free trade area in the Asia-Pacific…We see that as an important building block towards FTAAP,” Nowell said.

The APEC leaders created the ABAC in November 1995 to provide advice on the implementation of the APEC agenda and on specific business sector priorities. Its members are appointed by their respective leaders, and represent a range of business sectors, including small and medium enterprises.

The TPP, involving 12 of the 21 APEC economies, is the biggest trade deal currently in place. However, the deal has yet to be ratified by the legislatures of its members.

In a news conference on Monday, APEC Secretariat Executive Director Alan Bollard said that the FTAAP would help judge how 150 trade deals around the region, including the TPP, “fit together” or come in “conflict with one another.”

US President Barack Obama and the other 11 leaders of TPP member countries are expected to meet on the trade agreement in Manila on Wednesday, November 18, on the sidelines of the APEC Leaders’ Meeting. – Rappler.com