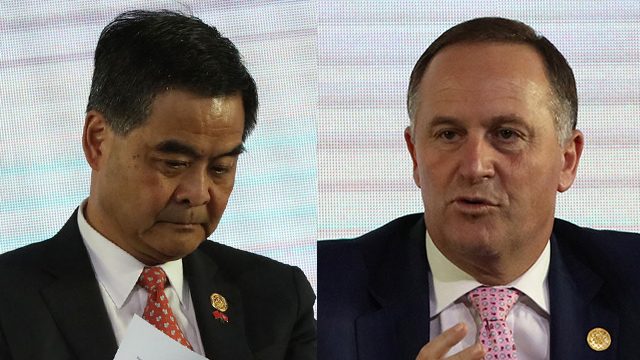 Facebook Twitter Copy URL
Copied
New Zealand and Hong Kong's leaders also weigh in on a trade deal for the region, while China pushes for the FTAAP

MANILA, Philippines – For New Zealand Prime Minister John Key, the Asia-Pacific Economic Cooperation (APEC) region should instead look into the potentials of the Trans-Pacific Partnership (TPP) than consider an APEC-wide free trade deal.

In an APEC CEO Summit session on “What is the next horizon for Asia-Pacific trade?” Tuesday, November 17, the leader of the developed country known for its exports of dairy, meat, and wine products and tourism said that any country in the APEC region that can meet the standards set in TPP should be welcomed into the deal by the 12 foundation countries.

Spanning about 2/5 of the global economy, TPP, which was concluded on October 5, involves significant market openings, tariff cuts on thousands of products, and pledges to protect investors across the 12 countries: Australia, Brunei, Canada, Chile, Japan, Malaysia, Mexico, New Zealand, Peru, Singapore, the United States, and Vietnam.

For Hong Kong Chief Executive Leung Chun-ying, the former British colony is very much a rule-based economy that welcome rule-based trade arrangements with other economies.

“But at the same time, I think the TPP has taken a high benchmark approach and these high benchmarks and high standards could become rigid,” he said.

“We want to be careful not to end up – for the world, not for Hong Kong itself – in the situation where some of these agreements actually make things rather complicated and confusing for enterprises, particularly small and medium enterprises (SMEs) that prevail in many parts of this region’s economy, including Hong Kong,” he detailed.

Putting micro, small, and medium enterprises (MSMEs) at the forefront of inclusive growh is the APEC’s focus for the year. (READ: Real work to help small businesses begins after APEC)

Thus, Leung said, “going forward, what I think we need to do is to seriously look at the “hows,” then he cited how the Doha Development Round has not been succcessful.

The Doha Development Round is the current trade-negotiation round of the World Trade Organization (WTO) that commenced in November 2001, and which aims to lower trade barriers around the world and facilitate increased global trade. Since the negotiations broke down in 2008, there have been attempts to revive the talks but to no avail.

“We need to look at the many plurilateral and bilateral free trade arrangements between and among the economies in this region and in other parts of the world, too,” Leung said. Key said if China is willing to accept what has already been negotiated in the TPP, then it should join along with any other APEC country.

China, which is experiencing a sluggish economic growth, is pushing for the Free Trade Agreement of the Asia Pacific (FTAAP). First proposed in 2006 and pushed by China during its chairmanship of APEC in 2014, FTAAP is seen as a potential rival to the US-led TPP.

But Key said, if the US Congress approves the TPP deal, it seemed to be unlikely that it would go back to square one to negotiate on FTAAP.

“In the perfect world, you would get to a situation where FTAAP has been concluded, all of the 21 countries and economies that sit within APEC are included in a free trade agreement,” Key said.

He also said that India would be part of that group because of its sheer size and significance. “That would be our ambition,” Key said.

Leung said that for him, there is no need to talk about the virtues or the “whys” of promoting free trade.

“We don’t even need to talk about what free trade is. Both Hong Kong and New Zealand, and there are many other economies out there, but the two economies are represented on this platform, have proved the virtues and the ‘whys’ of promoting free trade,” he said.

The Philippines, this year’s APEC host, has already expressed interest in joining TPP. (READ: APEC 2015: Where PH stands in the Trans-Pacific Partnership)

President Benigno Aquino III sought US support on the Philippines’ bid to join the TPP during his bilateral meeting with President Barack Obama on Wednesday.

Aquino made the statement at a joint news conference with Obama, and the former also announced that the two leaders welcomed continued stronger bilateral trade and investment ties. (READ: Aquino seeks Obama’s help on Philippines’ bid to join TPP) – Rappler.com