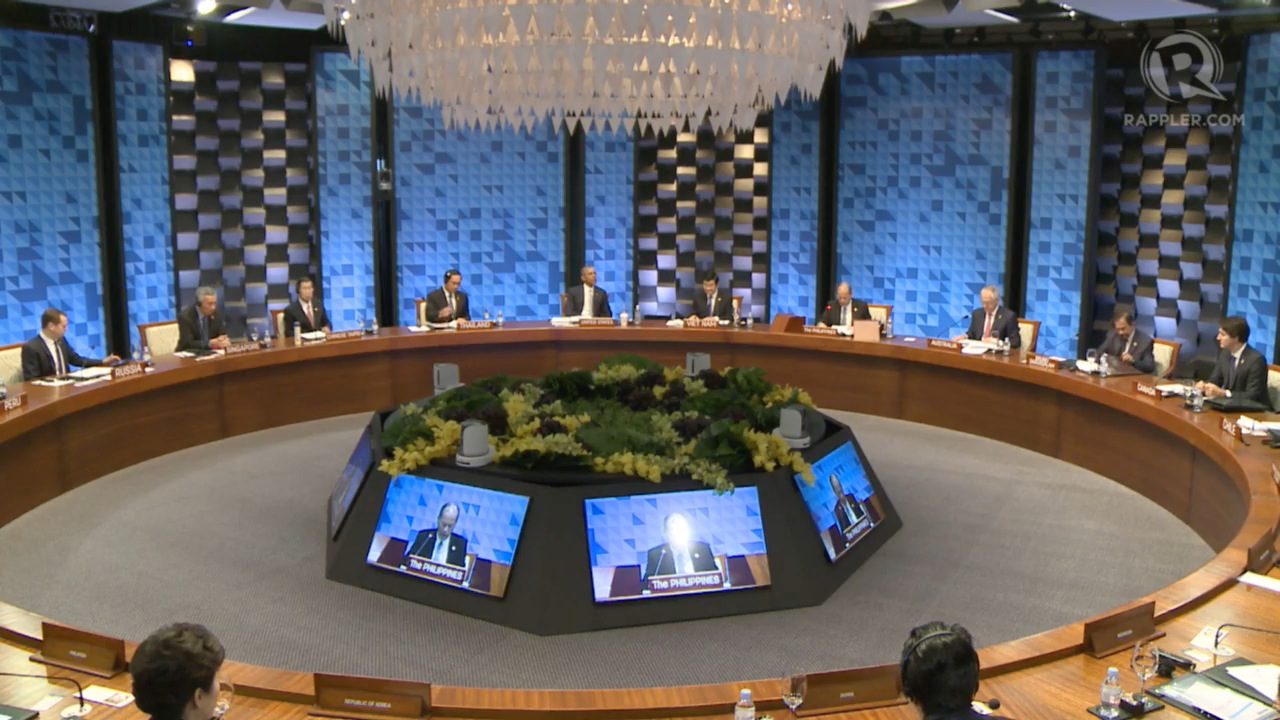 MANILA, Philippines – At the conclusion of a key regional meeting in this city, Asia-Pacific Economic Cooperation (APEC) leaders reiterated that the region should pursue an APEC-wide free trade agreement instead of being divided into US-led and China-led trade blocs.

In their declaration released Thursday, November 19, theleaders said the APEC-wide deal, known as the Free Trade Area of the Asia-Pacific (FTAAP), must build on regional agreements like the recently concluded US-led Trans-Pacific Partnership (TPP).

The leaders said they want to advance the FTAAP process by receiving findings and recommendations on a review of the deal when they meet again next year in Peru, the 2016 APEC chair.

First proposed in 2006 and pushed by China during its chairmanship of APEC in 2014, the FTAAP is seen as a potential rival to the US-led Trans-Pacific Partnership (TPP).

APEC ministers and business leaders, however, regard the TPP as one of the “building blocks” of FTAAP. (READ: APEC 2015: Trans-Pacific Partnership to transform Asia)

The US-led TPP aims to be the world’s largest free trade area, involving 12 parties that are also APEC members. China, however the world’s second largest economy is not part of the original members. (READ: FAST FACTS: The Trans-Pacific Partnership)

Obama and the 11 other TPP leaders met at the sidelines of APEC in Manila, their first meeting since the deal was concluded on October 5.

Each member of the TPP, however, must have the deal ratified by its respective legislature for the TPP to come into force, a process estimated to take between 18 months to two years. (Read: APEC 2015: Trans-Pacific Partnership to transform Asia)

The TPP is the economic component of the US policy of rebalancing military and economic attention to Asia. (READ:US-China rivalry on backdrop of Asia summits)

The leaders said they welcomed the progress in the TPP but officials must “ensure that regional trade agreements complement and strengthen the multilateral trading system.”

On November 17, at a panel discussion at the APEC CEO Summit, New Zealand Prime Minister John Key said the APEC region should instead look into the potentials of the TPP than consider an APEC-wide free trade deal.

Hong Kong Chief Executive Leung Chun-ying said during the APEC CEO Summit that he thinks the TPP has taken a high benchmark approach “and these high benchmarks and high standards could become rigid.”

He expressed concern about a possible situation where some of these agreements might be complicated and confusing for enterprises, particularly small and medium enterprises (SMEs) that prevail in many parts of the region, including Hong Kong. (READ: Is Trans-Pacific Partnership friendly to small businesses?)

In a briefing Thursday evening in Manila, Canadian Prime Minister Justin Trudeau said that “Canada is resolutely pro-trade,” and that the Canadian government knows how trade is important for growth and better opportunities.

Trudeau added that one commitment Canada made is a proper consultation process for TPP. “We look forward to hear from Canadians their concerns,” he said.

In a statement also on Thursday, President Benigno Aquino III said a number of leaders expressed their support for the Philippines’ bid to join TPP.

“This is a very encouraging sign; we of course want to join the TPP because it offers access to a far larger market. The US and Australia, among other economies, expressed their support for this particular endeavor,” Aquino said.

Another trade deal being discussed is the Regional Comprehensive Economic Partnership (RCEP), which includes China but not the US.

RCEP is being negotiated among the Association of Southeast Asian Nations (ASEAN), China, Japan, South Korea, India, Australia and New Zealand. (READ: ASEAN opens up half the world to PH trade)

The deal is much farther from coming into force compared to the TPP as no overall agreement has been reached as of yet.

The APEC leaders also released a separate statement in support of the World Trade Organization and outlined actions to be taken by APEC economies ahead of the 10th Ministerial Conference (MC10) to be held in Nairobi, Kenya from December 15 to 18.

The leaders promised to to engage actively and constructively in the upcoming discussions, with “the objective of achieving concrete, meaningful, balanced, and development-oriented outcomes.”

The leaders also recognized the contribution into force of the WTO Trade Facilitation Agreement (TFA) made. More than half of APEC members have since ratified the deal and the leaders called for the remaining to do “ideally before MC10.”

Calls were also raised to conclude the negotiation of an expanded ITA (Information Technology Agreement) before MC10.

Originally agreed in 1996, the original lowered tariffs on IT products such as cellphones which have led to lower prices for consumers. In 2013, the sector was estimated to account for $1.6 trillion.

The expansion seeks to widen the products covered in light of the rise of new products such as smartphones. – Rappler.com