Nov 26, 2015 9:33 AM PHT
Rappler.com
Facebook Twitter Copy URL
Copied
The upward revision from 5.6% is due to other services; trade and repair of motor vehicles, motorcycles, personal, and household goods; and construction 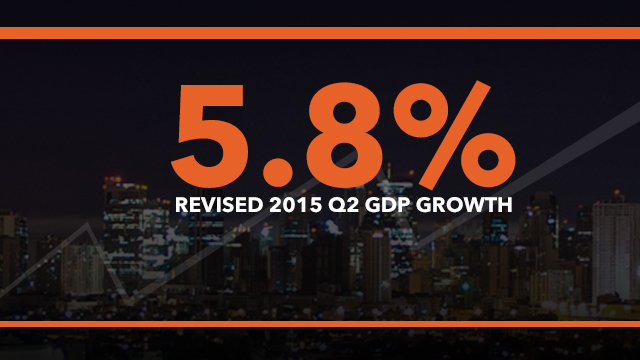 MANILA, Philippines – The economic expansion for the second quarter of 2015 has been revised to 5.8%, higher than the gross domestic product (GDP) growth of 5.6% announced in August, the Philippine Statistics Authority (PSA) said on Wednesday, November 25. (READ: Philippines’ Q2 GDP growth rises to 5.6%) The upward revision was due to other services; trade and repair of motor vehicles, motorcycles, personal, and household goods; and construction. The net  primary  income  from  the  rest  of  the  world  for the second quarter was revised upward from 2.2% to 3.6%.  This contributed 0.22 percentage  point  to  the  upward  revision  of  gross  national  income  from  5% to 5.4%.  The PSA revises the GDP estimates based on a revision policy approved by the former National Statistical Coordination Board Executive Board, which is consistent with international standard practices on national accounts revisions. The GDP growth for the third quarter will be announced Thursday, November 26, led by PSA and the National Economic and Development Authority. A chief economist from ING Bank Manila said on Wednesday that the country’s economic growth picked up to 6.3% in the third quarter on the back of accelerated government spending. (READ: PH growth picks up in Q3 – ING Bank) – Rappler.com