Nov 26, 2015 11:05 AM PHT
Rappler.com
Facebook Twitter Copy URL
Copied
(2ND UPDATE) The country’s GDP growth in the previous quarter was the third fastest in the region, after China’s 6.9% and Vietnam’s 6.8% 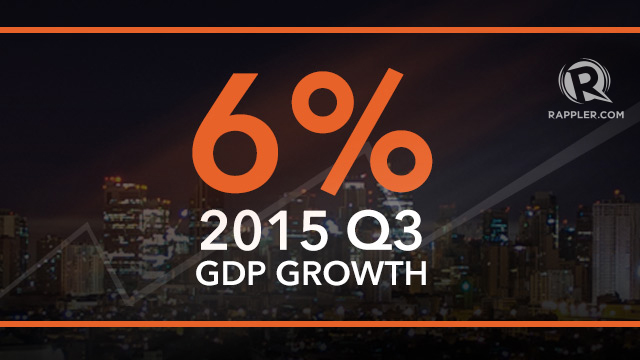 MANILA, Philippines (2ND UPDATE) – The Philippine economy, during the third quarter, grew at its fastest pace so far this year, driven by the gains of the services sector, improvement in state spending, and robust private consumption.

The Philippine Statistics Authority (PSA) announced Thursday, November 25, that the third quarter GDP growth is an improvement from 5.8% in the previous quarter, and from 5.5% in the same quarter in 2014. (READ: GDP Q2 growth revised to 5.8%)

This makes the country’s GDP growth the third fastest in the region, after China’s 6.9% and Vietnam’s 6.8%. The third-quarter figure for India, another fast Asian growing country, is not yet available as of this date.

GDP is the monetary value of all goods and services produced within the country’s borders over a specified period.

The government noted the 6% growth in the previous quarter is “an encouraging sign of a steadily growing economy.” 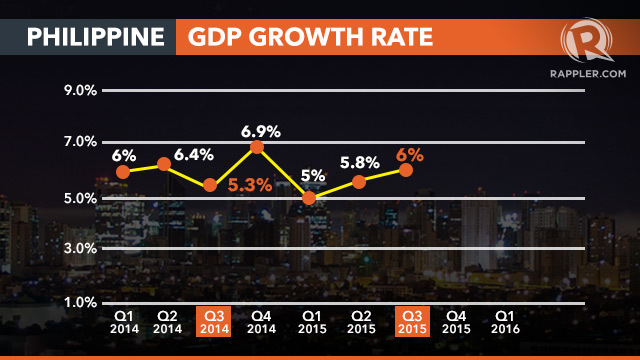 Philippine economic growth in the first 9 months of 2015 is now at 5.6%. A 6% full-year growth is very much likely given even better prospects for the last quarter, socio-economic planning chief Arsenio M. Balisacan said.

Balisacan said the country needs to grow by 6.9% in the fourth quarter to reach a full-year growth of 6%.

The government has targeted a 7%-8% full-year growth for 2015. Earlier this year, economists said the growth target will be missed, citing that the government must accelerate public spending and grow other sectors. (READ: PH to miss 2015 GDP growth target – economists)

Balisacan said on the sidelines of the announcement Thursday that there is no formal revision yet for the 2015 GDP growth target, but a 6% full-year growth is achievable.

Overall, the economy has yet to reach its peak and full potential, Balisacan noted. 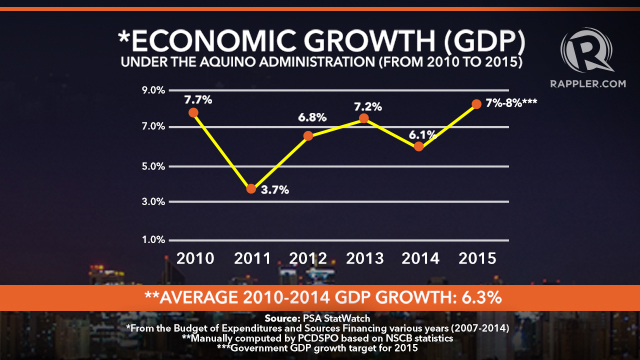 The public sector performance improved in the third quarter, as the government’s final consumption expenditure increased to 17.4% from 3.9%.

In a statement released Thursday, Finance Secretary Cesar V. Purisima said the investments in infrastructure and our people are creating a web of growth drivers setting the stage for higher quality growth.

With the 2016 budget, Purisima said the government will meet its 5%-to-GDP goal for infrastructure spending.

For the first 9 months of the year, the average government final consumption expenditure reached 7.2%, a leap from last year’s contraction of 0.2%.

Household consumption also grew by 6.3% on the back of more jobs, increasing income, low inflation, and inflow of remittances.

Public construction doubled to 41.2% from 20.6% in the previous quarter. Private investments in durable equipment at 12.1% which showed strong business confidence in the country, amid slowdowns among Asian economies, the government noted.

On the supply side, growth was driven by the services sector, which grew by 7.3%. Education, recreational, cultural, and sporting activities, and hotels and restaurants propelled other services to grow by 8%.

Also, with the setback in private construction, the industry sector also grew slower, albeit an improvement in manufacturing which remained as the sector’s major growth driver.

The slowdown in the construction came after 5 consecutive quarters of double-digit growth, thus, “this may just be part of the cycle of the sector,” Balisacan noted.

The services sector will remain strong and investments are likely to go up due to the expected increase in disbursements, the government official noted.

On trade, imports of goods and services have been robust at 13.5% versus last year’s 4.7%.

The growth trajectory will likely to continue in the last quarter, as domestic demand will still pick up during to the holiday season.

Low inflation, cheap oil prices, and the anticipated effects of election spending on the country’s growth support this outlook.

Exports are also seen to improve by next year. With the global economy still weak, the country recorded a P58.8-billion trade deficit, a reversal from the P7.3-billion surplus last year, thus net exports plunged by 906.4%.

There is also a need to innovate more with respect to tech and business processes to connect micro, small, and medium enterprises (MSMEs) to the global supply and value chains.

The importance of MSMEs – the focus of the Asia-Pacific Economic Cooperation (APEC) hosted by the Philippines this year – was also been emphasized.

More investments are also needed in research and development and technology to enable the agriculture, industry, and services sectors to develop significantly.

But El Niño remains a threat. Yields and harvests for palay and sugarcane were most affected due to inadequacy of irrigation water and rain.

The slight improvement in the agriculture sector’s performance is largely contributed by stronger growth in livestock, poultry, and fishery subsectors. The government has been taking measures to mitigate the impact particularly on food security and potable water supply.

On the coming elections, the government noted the need to remain focused on ensuring that the economy is on the right path as political changes take place.

With sound fundamentals, we are optimistic that the new administration will not find it difficult to traverse an even higher growth path, Balisacan said in a statement.

Purisima said that while we have the wind on our backs, “we must never stop running the good race we’ve started.”

“We have an empowered people increasingly knowing what it wants and how to demand it. We have sound fundamentals and solid demographics – and with the aforementioned investments, we are diligently doing our homework to reap the dividends,” Purisima said.

“We are confident that after 5 years we have laid our house with firmer foundations. But reform is a game that has no end. Increasingly, we look to our next set of leaders to carry the work of charting our future forward,” he said.

Communications Secretary Sonny Coloma said the government will intensify efforts to address challenges posed by extrinsic factors such the predicted severe El Niño scenario through the last quarter and into the first half of 2016, and the slowing growth of the global economy.