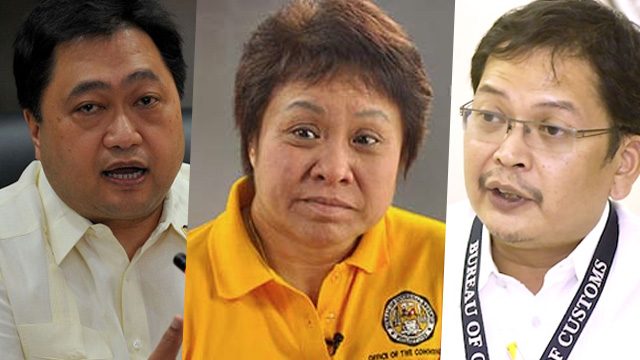 Their allegations stem from two department orders issued by Purisima, and one memorandum order issued each by Henares and Sevilla.

The complainants said that because of the orders, they were unable to exercise their professions as customs brokers. The orders stopped them from transacting with the Bureau of Customs because of the additional certifications and accreditations on top of of those required under the Customs Brokers Act of 2004.

The Ombudsman had dismissed the complaint because there is a pending case before a Manila Regional Trial Court over the same orders.

But the complainants’ lawyer, Catalino Generillo Jr, said that during the preliminary investigation, the Ombudsman was supposed to determine whether or not there was probable cause for the administrative cases.

Generillo noted that the respondents did not counter the petitioners’ argument that the only requirement for customs brokers, as mandated by law, is “a certificate of registration and a professional identification card.”

The lawyer added that the officials made an admission against their own interest in citing the case of Airlift Asia Customs Brokerage and Allan G. Benedicto vs. Court of Appeals, wherein the Supreme Court ruled that the DOF and BOC could not impose additional requirements for a customs broker outside those mandated by law.

Generillo added, “In sum, the uncontroverted facts above have established prima facie evidence, if not proof beyond reasonable doubt that the respondents committed acts that constitute violations of RAs No. 9280, 3019 and 9485 and grave misconduct.”