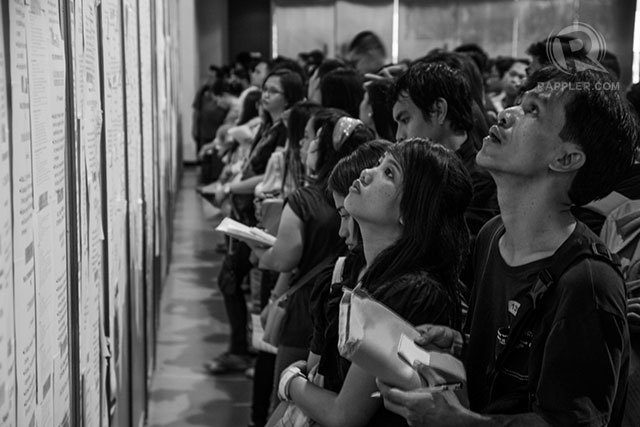 Facebook Twitter Copy URL
Copied
According to the Philippine Statistics Authority, there were about 2.6 million jobless Filipinos in 2015, a bit lower than last year

MANILA, Philippines — There are fewer unemployed Filipinos in 2015 than a year ago, a preliminary report of the Philippine Statistics Authority (PSA) showed.

This translates to about 2.6 million jobless Filipinos in 2015.

PSA did not give the reasons for the lower unemployment rate in 2015.

National Statistician Lisa Grace Bersales said unemployed males were recorded at 1.66 million or 63.7% of the total jobless rate, while unemployed females were at 940,000.

One-third of these unemployed persons were high school graduates (33.5%), and more than one-fifth were college graduates (21.8%), the PSA data showed.

But PSA noted that it recoded a lower participation among 15 years old and older Filipinos this year than in 2014.

For underemployment, the PSA data showed that the rate inched up to 18.5% from the 18.4% a year ago.

PSA said employed persons, which are grouped into agriculture, industry and services sector, were approximately at 38.7 million in 2015.

Those in the services sector, meanwhile, comprised more than half (54.7%) of the total employed persons.

About 18.9% were engaged in wholesale and retail trade or in the repair of motor vehicles and motorcycles, PSA said.

Meanwhile, workers in agriculture made up the second largest sector, accounting for 29.1%, while those in the industry sector, 16.2%.

When it comes to occupation, PSA said the laborers and unskilled workers comprised the largest proportion, with 31.5% among the total employed persons.

Those working as officials of the government and special-interest organizations, corporate executives, managers, managing proprietors and supervisors came second in proportion, with 16.3%.

Among the employed, 63% are full-time workers who worked for 40 hours or more each week, while the rest are part-time workers that go to work for less than 40 hours a week. — Rappler.com