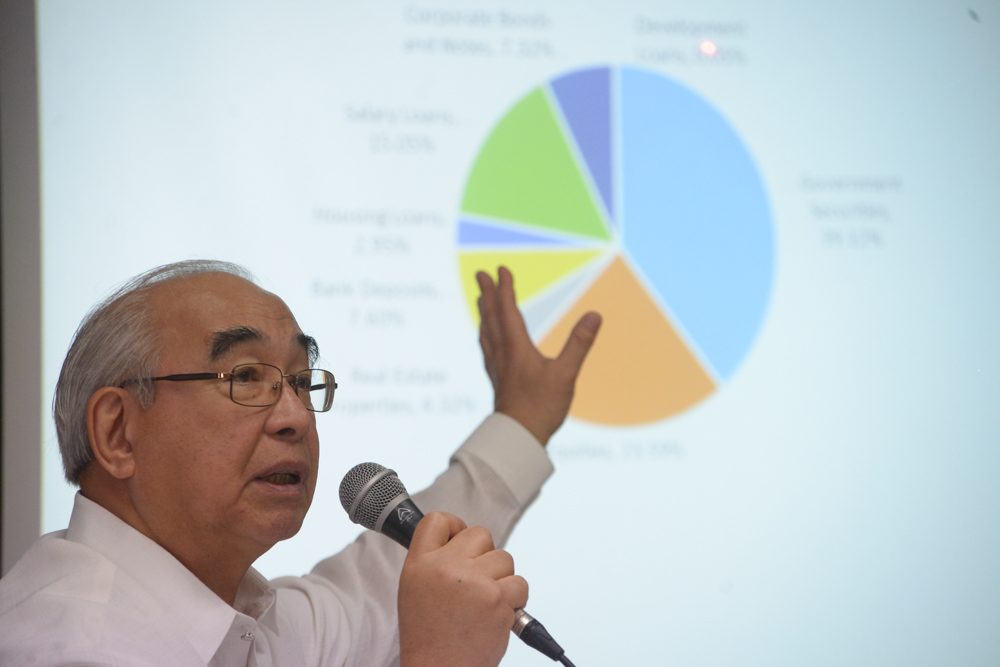 Facebook Twitter Copy URL
Copied
The proposed P500 to P1,000 pension hike will only be feasible if there is a corresponding increase in members' contributions, says SSS president Emilio de Quiros Jr

At a press conference on Monday, January 18, SSS president Emilio de Quiros Jr said they cannot accommodate even the proposed P500 and P1,000 increases without raising the rates of members’ contributions.

De Quiros stressed that, as it is, the current contributions are not enough to cover increased pensions. He noted that members even receive big interest for their contribution. According to the SSS chief, for every P1 contribution, members are given a benefit of P6 to 15.

“This is an unfunded liability. May malaking gap. (There is a big gap),” De Quiros told reporters.

If approved, the P1,000 increase would result to an additional expense of P28 billion out of the pension agency’s average income of P33 billion.

“Mag-uumpisa kaming kumain sa investment [fund], iiksi ang buhay ng SSS [fund],” he said. (We’ll have to get money from the investment fund, which will shorten the lifespan of the SSS fund.)

“We would be forced to raise the contributions from the current 11% to 15.8% to revert the fund’s lifespan to 2042,” he also said in Filipino.

House leaders believe that if the Senate approved the pension hike proposal’s accompanying bill, House Bill 6112, Aquino would have approved HB 5842, which seeks to increase the monthly pension of SSS members by P2,000.

Without HB 6112, SSS cannot independently approve any step-up in the contribution rates without the President’s approval, unlike other government-operated insurance funds like PAG IBIG and the Government Services Insurance System (GSIS).

Before Congress resumed session on Monday, Belmonte told reporters that he would ask Aquino to prompt SSS to increase pension by P1,000 since Senate President Franklin Drilon had committed to pass the complementary bill.

(Many SSS members only pay on the basis of the [minimum] income of P1,000. That’s just P100. How can an SSS member live by just depending on his or her contribution?)

While SSS pointed to the need to increase contributions to provide for better pension payouts, leftist groups slammed the SSS for its inefficiency in collecting contributions.

He also argued that the P13.5 billion employer delinquency will not cover the P56 billion additional expenditure if the P2,000 pension hike was approved. (READ: Senior citizens: ‘We can’t afford medication without SSS pension hike’)

SSS Commissioner Michael Alimurong said that majority of uncollected contributions were from the informal sector.

“This is composed of  the self-employed, migrant workers, and people who recently lost their jobs, who we can’t force to pay,” Alimurong said. – Rappler.com