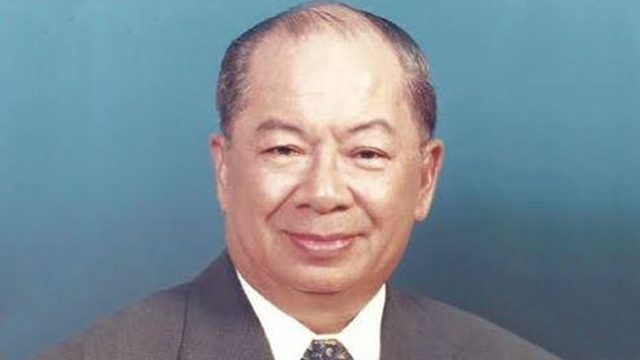 Singson, the first central bank governor under Republic Act 7653 or the New Central Bank Act of 1993, is credited with laying the foundation of a strong central bank and banking system that helped the Philippines withstand the 1997 Asian financial crisis better than its neighbors, among other global challenges.

Singson rose from the ranks in the old Central Bank where he started his career as a legal and evaluation officer in 1955.

Regional financial publication Asiamoney named Singson as Central Bank Governor of the Year in 1996 and 1997, “for his steady control of monetary policy against difficult odds, as well as for his independence,” the BSP said.

He served as president of JG Summit Capital Markets Corporation, and was senior adviser of JG Summit Holdings, Incorporated since he left the BSP in 1999.

Malacañang Palace said “the country mourns the loss of an outstanding central banker and a devoted publuc servant.”

In a statement, Palace Communications Secretary Herminio Coloma Jr said: “Gabriel Singson served the nation exemplarily as the first Governor of the new Bangko Sentral ng Pilipinas. He laid the foundations for a more stable banking and financial system that enabled the country to overcome the challenges of the Asian financial crisis in the late nineties.”

The BSP said it will hold a requiem mass and necrological service on Wednesday, March 30, at the BSP Assembly Hall in Manila.

Singson’s interment is on Friday, 1 April 2016, at the Heritage Park in Taguig City. – with a report from Chrisee dela Paz/Rappler.com