PH merchandise exports down 4.5% in February 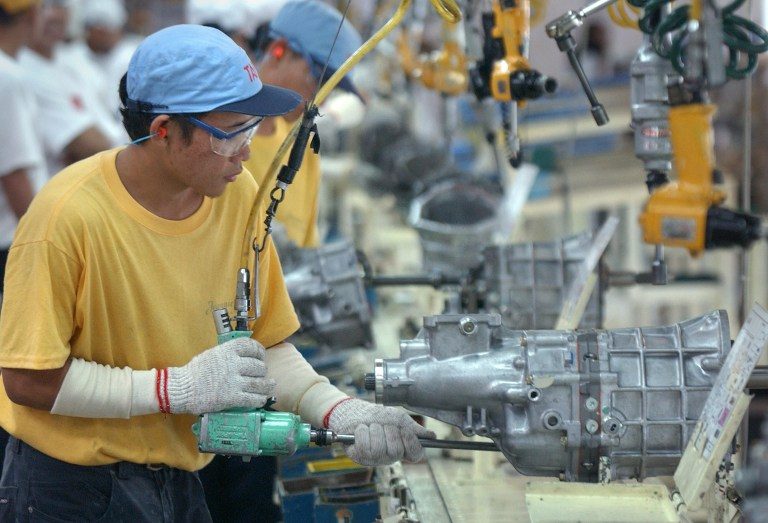 Facebook Twitter Copy URL
Copied
Weak global demand continues to push down Philippine export growth but this is expected to persist only within the near term, says NEDA

MANILA, Philippines – Continuing its slide this year amidst a weak global economy, Philippine merchandise exports fell by 4.5% in February, according to the National Economic and Development Authority (NEDA).

The country’s total export earnings hit $4.3 billion in February, down from $4.5 billion recorded in the same month last year due to decline in all commodity groups, the Philippine Statistics Authority (PSA) reported on Tuesday, April 12.

Socioeconomic Planning Secretary Emmanuel F. Esguerra said in a statement that sluggish world demand has affected the export performance of most countries in the region.

“The export performance of most of the trade-oriented economies in East and Southeast Asia continues to reel from weak global demand that is largely influenced by the global economic slowdown. For the Philippines, we see this continuing only within the near term but it remains important for us to set up short-term measures that will support some of our export products,” he said.

Only Vietnam and Thailand posted positive export gains while China recorded the steepest decline at 25.3 % during the period.

The World Bank recently kept its positive growth forecast for the Philippines even as it lowered its forecast for the region due mostly to slower growth from China as it transitions from an export-led  to a more domestically-focused economy.

“As softer external demand is expected over the near term, the Philippines should at least aim for a 5.4% growth in merchandise exports, which is the low-end projection of the Export Development Council,” Esguerra said.

Short-term measures include providing government support to export products that are seeing demand growing at faster than other export segments and where the Philippines has an increasing market share, he added.

Revenues from manufactured products fell slightly by 2% to reach $3.7 billion from $3.8 billion in February 2015, Esguerra said. This drop, he added, “reflected the general slowdown experienced by the manufacturing sector around the world.”

Despite the decline in overall manufacturing exports, Esguerra noted that electronics posted its 9th consecutive month of positive growth.

Electronic products comprised 49.4% of total merchandise exports for the period.

Likewise, exports of mineral products declined by 32.5% to $172.6 million in February due to lower exports of all segments except copper concentrates.

Outward shipments for petroleum products also declined by 60.5% to $6.1 million in February due to persistent low global oil prices.

Esguerra noted that with weak global growth, the country should focus on opportunities in the ASEAN region, an area expected to show economic improvement this year.

He added that the gross doemstic project growth in India and the ASEAN are expected to pick up, which will help balance the slowdown of China.

In particular, the ramping-up of investments in Indonesia and the Philippines, Vietnam’s continued expansion, and Thailand’s recovery from a slump in 2014 will prop up growth in ASEAN to 4.5%, higher than the 4.4 % growth estimated in 2015.

“This provides an opportunity for the Philippines to expand its export market in the region. And it is important to ensure that Philippine products conform to export standards so as not to lose market share,” the NEDA chief said. – Rappler.com