MANILA, Philippines – The government has released another advertisement in its ongoing campaign to raise tax awareness, and this time, it’s targeted a group who really should know their taxes – accountants.

In its latest Tax Watch campaign release, the Department of Finance (DOF) and the Bureau of Internal Revenue (BIR) revealed that there were 1,944 accountants, bookkeepers, and auditors in the National Capital Region who filed their income tax return for taxable year 2014.

Of that number, 11% or 214 filed zero income tax. Fifty-two of the zero income tax filers were from Quezon City, followed by 35 in Manila and 22 in Makati, the government said.

The ad also showed that 17% of the total filers or 338 declared monthly gross income of less than P13,890, which is equivalent to the monthly gross salary of an Administrative Assistant I.

To drive the point home, the ad also stated that “a certain accountant with more than P1 million earnings paid P25 income tax due for 2014.”

The DOF and BIR Tax Watch campaign publishes weekly lists of individual and non-individual taxpayers on the DOF website, as well as print ads. The goals: increase transparency in tax payments and encourage people to pay the right taxes.

The campaign has targeted multiple professions with one particular ad targeting doctors causing controversy in 2014.

Last week, the government turned the spotlight on lawyers ahead of the deadline for filing income tax returns on April 15. 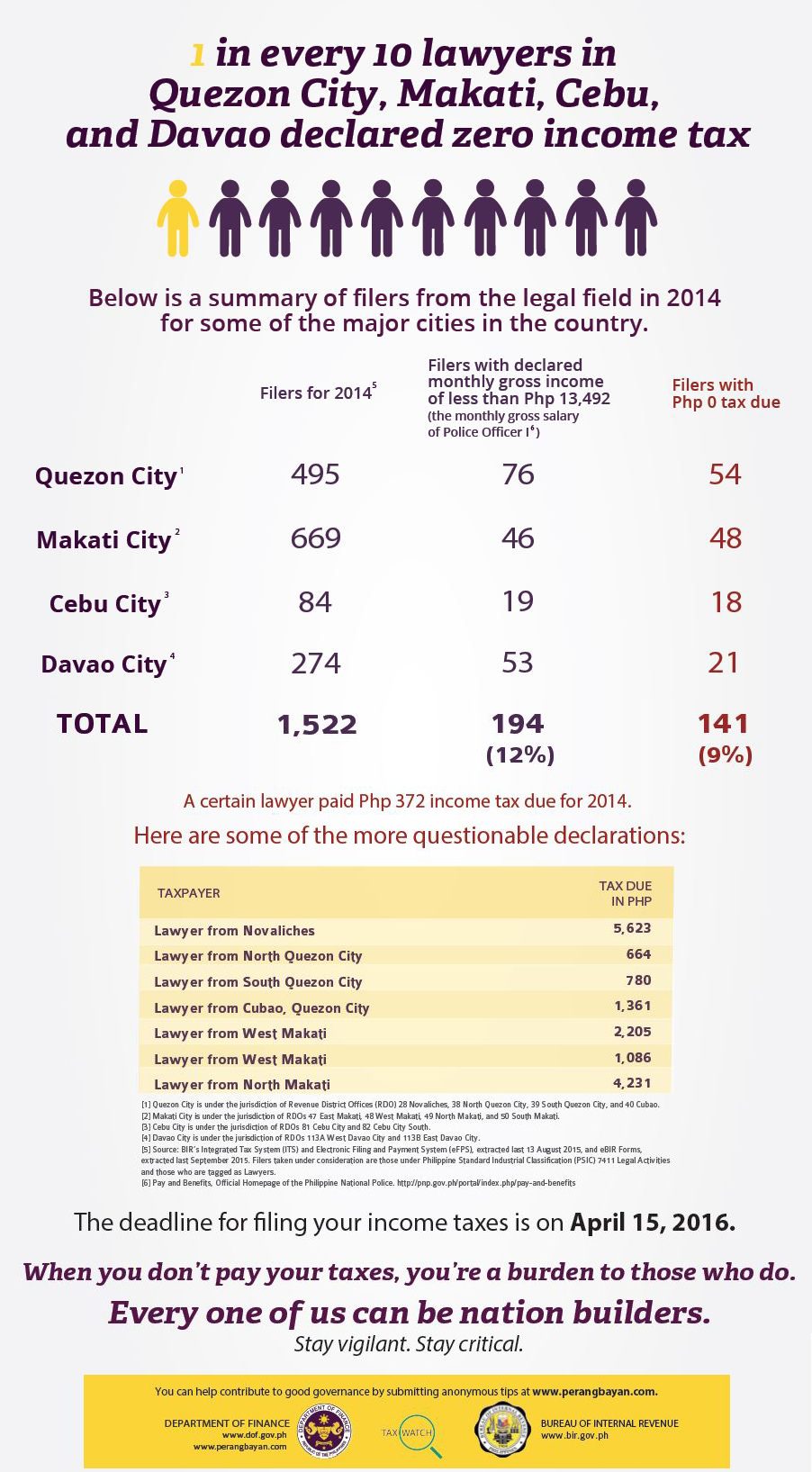 The DOF and BIR use the Tax Watch campaign as a means to increase tax compliance, which has been problematic especially among the self-employed.

“Only two in every 10 registered self-employed taxpayers are active filers. It is true that many self-employed and professionals pay less taxes than a public school teacher. In fact, every year, we lose at least P200 billion to tax evasion from the self-employed sector alone,” the DOF said.

For its part, the Tax Management Association of the Philippines (TMAP) estimates that the self-employed contribute only P38.6 billion or 14% of total personal income tax collections while salaried individuals contribute in excess of 85% of collections. – Rappler.com