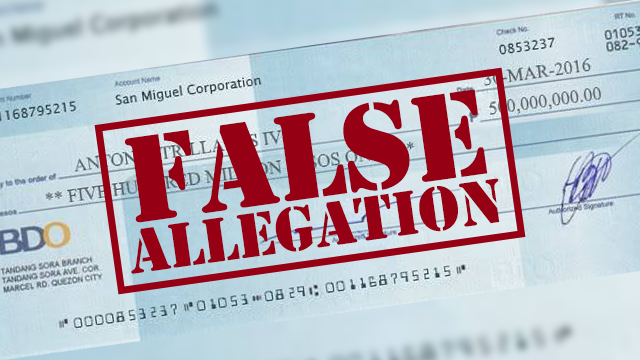 “This is nothing more than a fabrication and a blatant disinformation,” SMC said in a statement on Thursday, April 28, as a screenshot image of a Banco de Oro check for P500 million purportedly issued by San Miguel to Trillanes circulated in social media.

In a viral post on Facebook, Antonio Tamarkis claimed that the signature on the check belongs to SMC treasurer and chief finance officer Ferdinand Constantino.

SMC denied the allegation, saying that the company does not have an account with BDO in Tandang Sora, Quezon City.

“[We] never issued such check to Senator Trillanes,” SMC said.

“Having said that, we denounce, in the strongest terms, this apparent effort to deceive the public and drag our company’s good name in current political issues,” it added.

The diversified conglomerate also said, “As a responsible corporate citizen, we enforce a strict code of ethics that ensures the company does the right thing and that it safeguards the long-term interest of its customers and stakeholders.”

BDO also issued a certification, saying it does not have a record of any SMC account with the bank’s Tandang Sora branch.

“The alleged account number 001168795215 does not exist in the bank’s system and records,” BDO said in a separate statement.

Presidential candidate Grace Poe, who has been endorsed by Trillanes, had earlier said that she borrows private planes from SMC for her provincial sorties.