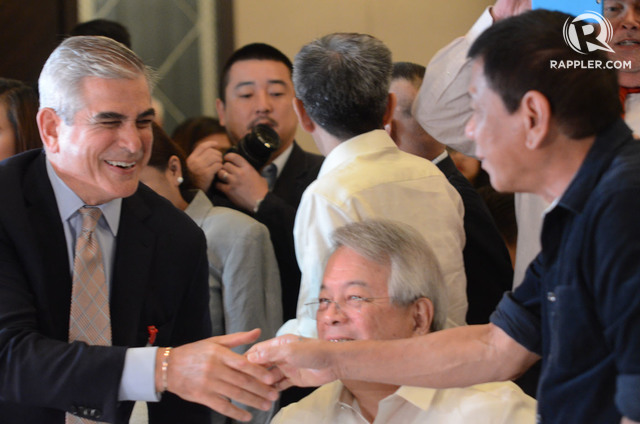 Duterte led from the beginning of the unofficial tallying of votes after polls closed on Monday, May 9, and has since enjoyed an insurmountable lead. (READ: Philippine economy ready for any president)

Before the polls, some analysts reported that the Davao City mayor’s vague economic plans and threats to kill thousands of criminals are spooking the financial market.

The mood, however, changed on Tuesday, May 10, when local businessmen and industry leaders welcomed and expressed support for Duterte.

“It’s a fresh start for all. The general efficiency and reporting speed of the results make for a credible election process. Hopefully, contenders rally behind the president elect,” Hans Sicat, president and CEO of the Philippine Stock Exchange, told Rappler in a mobile phone reply.

Sicat said that aside from providing the right environment for business and industry to function, it would be good for Duterte to signal what he prioritizes in the economic front.

In a statement on Tuesday, the influential Makati Business Club (MBC) urged Filipinos to rally behind the country’s new set of leaders and help them in further boosting the economy.

“We call on all Filipinos to come together, to support our new leaders. Let us focus on those aspirations that unite us, rather than on the issues that divide us. After all, despite our divisions, we all aspire for the common goal of authentic freedom and inclusive development,” it said.

The MBC said that the Philippines “remains in a special spot with numerous positive forces converging in our favor” and “propelling the country to greater heights requires the cooperation of all sectors of society.”

“On the part of the business community, we welcome the clear mandate given our new leaders by our people and the credibility of the elections, and we stand ready to be an active and participative partner of government in ensuring sustainable and inclusive growth that benefits not just a select few but all Filipinos,” it said.

On Monday night, Duterte said a good number of his appointees would be retired military men.

He said former Armed Forces of the Philippines chief Hermogenes Esperon Jr would definitely have a place in his Cabinet. Esperon was Presidential Management Staff head during the Arroyo administration.

Dominguez served as agriculture secretary during the presidencies of Corazon Aquino and Fidel Ramos.

Rappler asked some businessmen and industry leaders if they want Duterte to retain some incumbent Cabinet members.

For Alfredo Yao, founder of the Zest-O Corporation and Macay Holdings, Incorporated, it would be Public Works Secretary Rogelio Singson and Finance Secretary Cesar Purisima.

It is somehow the same for Dan Lachica, president of the Semiconductors and Electronics Industries in the Philippines, Incorporated (SEIPI).

“For his cabinet, people like Secretaries Luistro and Jimenez would be good to retain. I personally look forward to working with Dureza, with whom I have served before as part of Office of the Presidential Adviser on the Peace Process (OPAPP),” MBC’s Peter Perfecto said.

Yao hopes Duterte will stay true to his promise of promoting peace and order, shortening bureaucratic processes, as well as implementing tax reform.

“My wish for him is to fulfill his promises. What he promised is peace and order. He also promised to act on shortening bureaucratic processes. Now, whenever you apply for tax-free incentives, you have to go to the DOF then Board of Investments then back to DOF,” the Chinese-Filipino businessman told Rappler in a phone interview.

Aside from these priorities, Yao said Duterte should also get the side of businessmen before putting an end to contractual labor.

“He’s very aggressive about contractual labor and I think he will face resistance from the business side. He should hear both sides first,” Yao said.

For Perfecto, he said the business community wants Duterte to prioritize 3 things: “Integrity, innovation and infrastructure.”

Asked for his advice to the incoming president, Lachica said he should “think carefully before speaking spontaneously, ensure ease of doing business, and improve infrastructure.”

He was apparently referring to Duterte’s habit of giving off-the-cuff remarks that had drawn the attention of the international media, but not in a good way.

But for Perfecto, the winner is pretty clear. “Congratulations to President-elect Duterte. The people have spoken, and they have spoken loud.” – Rappler.com